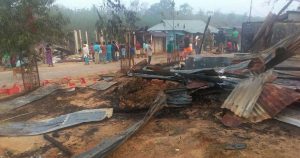 The All India Democratic Women’s Association (AIDWA) strongly condemns the brutal violence unleashed by RSS-BJP goons on the Left activists in Tripura immediately after the declaration of the assembly election results. The BJP which had an opportunistic alliance with the separatist forces used tremendous money and muscle power for electoral gains. This reign of terror has not spared women too. The plight of children can only be imagined. Students are traumatised and feel insecure about appearing for their exams.

Offices of the Left and mass organisations have been ransacked, vandalised, burnt and looted. More than 1700 houses have been attacked or burnt. Hundreds of people including women have been injured. A pregnant lady was killed yesterday. Women are being threatened and terrorised. The murderous attacks are continuing. The strategy of the BJP of inciting violence against political opponents while claiming that they are the victims is untenable.

The RSS-BJP has no respect for any democratic institutions. They have been taking the law into their own hands due to the support from their leadership.  We have seen the fatal attacks by them on Muslims, Dalits, Backward classes, Christians, Adivasis and women in various parts of the country. The attackers have not yet been penalised.

AIDWA demands action by the authorities to immediately stop this reign of terror.

AIDWA expresses solidarity with all the people and women of Tripura who are bravely facing these attacks and calls upon all women to join the protests being organised all over the country.