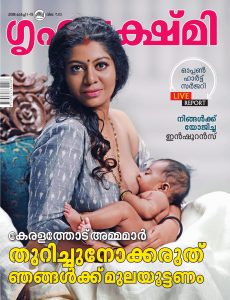 Recently, a Malayalam women’s magazine, Grihalakshmi, got in trouble for its latest issue. The cover story was on breastfeeding and the problems that women face when doing so in public. The cover image of this issue, quite unsurprisingly, had an image of a woman breastfeeding a baby, and a caption that read, “Mothers tell Kerala, 'Please don't stare, we need to breastfeed'."  While there were those who lauded the magazine, there were others who criticised it. In fact, according to the latest reports, a case has been filed against the magazine and the model in the cover image, Gilu Joseph, under section 3 and 4 f the Indecent Representation of Women Act.

The criticisms levelled at the magazine, for their choice of cover, revealed the regressive mind set of those who raised them. The ‘concerns’ raised by these people were:
1. The model in the cover image was not a mother in real life, she is single and unmarried
2. She didn’t wear a bra
3. She was not lactating.

How is a model’s real life motherhood, or the lack of it, relevant? Demanding that a woman who is presented as a mother in a picture be a mother in real life too, is ridiculous. Do we expect that only those women who are actually queens play the role of queens in movies? If a cover magazine has a doctor, do we create an issue if the model isn’t a doctor in real life, too?

And how does it matter if she is single and unmarried? Can single, unmarried women not be mothers? Of course they can. Just look at Sushmita Sen. But, of course, the fact that this was one of the concerns only reveals the narrow, patriarchal outlook of those who raised them, where they can only see a married woman as a mother.

The point that the magazine was trying to make was simple. Women feed their children. They feed their infants whenever they have to, and it shouldn’t matter whether it’s in public or in private. The magazine’s cover story was about breast feeding itself, so it’s perfectly clear why they chose to use an image of a breastfeeding woman as the cover.

But, to go to all this trouble to justify the choice of cover image is unnecessary. The root cause of all this criticism, it seems, is simple. It’s not the model, it’s not her marital status, it’s not whether she is lactating or not. It is the sight of an exposed breast that people seem to find objectionable. What else would explain their complaint that the woman wasn’t wearing a bra? How they expect a woman to breastfeed a baby through a bra is anyone’s guess.

This isn’t the first time that an image of a breastfeeding mother has created a furore. 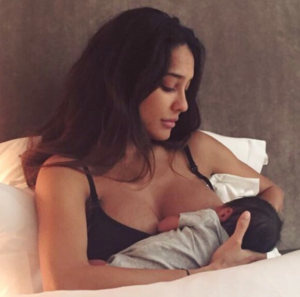 Last year, on 7 August, Lisa Haydon posted a photograph of herself, breastfeeding her son, on her Instagram page. The picture was meant to celebrate World Breastfeeding Week. Unsurprisingly, Haydon was soon inundated with comments criticising her decision to post a picture of herself while breastfeeding, a “private” activity, on her “public” account. Unlike Gilu Joseph, she was actually a mother, she was married, and she was lactating. Despite that, she got a lot of hateful comments.