This is the second of a two part series on the Hindu Samhati in Bengal. Read the first part here. 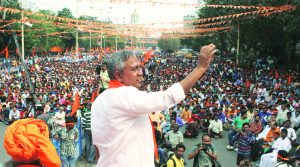 Although Tapan Ghosh and the Bharatiya Janta Party keep the reasons behind their apparent estrangement a closely guarded secret, a cursory reading of Ghosh’s blogs and other writings reveal that his umbilical cord to the Sangh is still uncut. Lauding the holy trinity of Hindutva or political Hinduism, Savarkar-Hedgewar-Golwalkar, he not only looks up to the organisation but also believes in rekindling “Hindu shaurya” or the “valor” of Hindus, taking, as inspiration, the Hindu advwarriors in India during the ancient and middle ages, who fought successive invaders, from the Greeks to the Muslims.

He has called for the “militarisation” of Hindus, a la Sangh, but with a focus on Bengalis. Mohan Bhagwat’s recent boasting of RSS’ capability to deploy an army of Deshbhakts in three days, in contrast to the Indian army’s monumentally slow movement in meeting the enemy, finds resonance in Samhati campaigns.

Hailing Promode Mutalik, another former RSS pracharak turned self-styled Hindutva warrior and founder of Ram Sene in Karnataka, Ghosh betrayed no emotions (if any) against the Sangh leadership. Instead, he appeared more hardcore than some of the Sangh loyalists. Glorifying Modi after his 2014 victory as a “Hindu lion,” Ghosh said that he despised the “inclusive politics” of the BJP under the leadership of senior BJP politicians like Atal Bihari Vajpayee and L K Advani, who, he felt, had weakened some Sangh leaders as they too tried to emulate the duo’s secular stance following the 2004 electoral defeat. Ghosh said that he could not stomach Advani’s secular makeover, after the Babri Masjid demolition, which was prompted by Advani’s hurry to lead the country in an official capacity. According to Ghosh, this is what prompted his fateful paean, dedicated to Jinnah, which eventually led to his downfall. For Ghosh, a diehard Hindutva, it was not Jinnah but Islam that created Pakistan, as the faith itself is exclusive and divisive.

He saluted Modi for his return to the Hindutva core and for “standing like a rock” on the foundational principles of RSS as he won the battle, thanks to Amit Shah’s brilliance in “applied Moditva.”

Ghosh, a kayasth, (unlike the Chitpaban brahmins who hold the sway in the RSS hierarchy) has a seemingly different take on Sangh’s condoning of the brahminical caste system. He feels that it is this that drove out Ambedkar from the Hindu fold, and what lets the upper caste BJP members get away with calling Mayavati a “chamarine” contemptuously. The one thing that Vivekanand can be faulted for, according to Ghosh, is that the kayasth monk described himself as a ‘kshatriya,’ thus denying his “shudra origin.”

This rooting for subaltern Hinduism makes Ghosh’s brand of indoctrination suitable for Bengal, where the scheduled castes alone comprise 23% of the state population.

In fact, although Samhati’s current president is a brahmin, it has made its presence felt mainly among the oppressed castes, including dalit Hindus in bordering areas. It has made inroads among namashudras, formerly known as chandals during the British Raj-era censuses, who comprise 17% of the state’s scheduled caste population; they’ve also reached the poundro khatriyos, who represent another large dalit caste. Historically, both the castes have been politically assertive with an increasingly educated middle class. It gave birth to community leaders who foregrounded dalit self-respect and social justice issues during the freedom movement, while many of them maintained their distance from the Congress brand of composite nationalism, going so far as to call it a chimera.

Jogendranath Mondol, its best known face (most controversial, too), was close to Ambedkar and made room for Babasaheb to get elected to the constituent assembly from Bengal. Mondol advocated dalit–Muslim unity against the casteist Hindu fold, going on to become a minister in the pre-independence Muslim League ministry in undivided Bengal; later, he became the law minister of Pakistan. However, he left Pakistan in the 1950s after Jinnah’s successors refused to give special protection to the riot-hit Bengali dalits in East Pakistan. He died, heartbroken, in India.

Ghosh and his tribe is now trying to pit the present generation lower caste Hindu refugees from Bangladesh, who had suffered religious persecution in Bangladesh at the hands of the Muslims, against the Muslims here, in India. The Sangh Parivar runs the same social engineering project for Hindu consolidation across caste barriers in Bengal. Specifically, it aims at breaking Banerjee’s hold on Matuas, a religio-social sect of namashudras led by the scions of nineteenth century reformers, father-son duo Harichand and Guruchand Thakur.

Matuas, as the presiding family of the sect claims, determine electoral outcome in as many as 78 assembly constituencies, mainly in districts close to Kolkata. The Matuas and the Muslims are the two legs on which Banerjee’s poll success stands. But it lacks social cohesion, despite the common plights of Hindu and Muslim dalits across the border, due to the post-Partition trauma and differences it led to between the two communities. Harping on about the social disjoint, both BJP and Samhati are trying hard to make Banerjee’s winning equation dysfunctional. It appeared that Ghosh had made headway after he was invited to a Matua congregation recently. At the very least, it appears he has some leverage vis-à-vis Banerjee, which, in turn, explains her softening stance towards Samhati in order to checkmate BJP.

A Bengali Tinge to Hindutva

Another unique selling point that Samhati has is Ghosh’s invocation of Bengal’s religious and political icons. Its recent rally banner included the image of a kharga (a falchion of sorts) wielding Goddess Kali, complete with her blood-socked protruded tongue, adorned with a waistband as well a necklace of chopped heads of slain demons. This image has been a part of Bengali Hindu’s nationalist imagination since the Swadeshi movement. The divine demon-slayer shared the space with other leaders that Samhati often invokes, such as Vivekananda, Tagore, Bankimchandra, and Sharatchandra, with their purported or real anti-Muslim quotes. Ghosh mentioned another Bengali icon with national popularity, Netaji Subhash Chandra Bose, and the lesser known but influential Hindu Mahasabha leader, Shyamaprasad Mukherjee, in the same breath, although their politics were poles apart.

He challenged Modi to install a statue of Subhash Chandra Bose at a round-about in Lutyen’s Delhi, the seat of power of the Central Government; the honour had been, in the past, denied by the Nehru clan. He also pulled up Modi and his party for not honouring Mukherjee enough, while placing another Jana Sangh leader, Deendayal Upadhyaya, on an increasingly higher pedestal.

This Bengali tinge to the Sangh orthodoxy, which largely represents North and West Indian Hindutva icons — with which the rest of the Hindu India does not relate much — has, apparently, given rise to mutual warmth between Mamata Banerjee and Ghosh, as both are keen on playing up the anti-Centre sentiments, historically popular since undivided Bengal. But, their politics will be at cross-purposes shortly if the Chief Minister continues to stick to her secular position and Ghosh refuses to soften his Hindutva stance. As of now, the fringe fanatics are faithful to Sangh’s “Rastravadi” core, albeit with a strong regional flavor. It becomes obvious again as they blend the two in their war cries hailing Bharat Mata, itself a superimposition of the territorial “Mother India” on the image of Goddess Durga and Ma Kali. For Ghosh and his followers, the modern-day monsters, needless to say, are the Muslims, as is clear from the chants that rent the air if Samhati supporters assemble anywhere. On the other hand, Mamata Banerjee, herself a neighbour to the original “Kali Kolkattawali” in Kalighat and a devout worshipper of the divine at her home, has taken Muslims and Christians under her wings against the Hindutva onslaught. So, the question remains, who will use whom and how?

In 2013, Samhati celebrated the birth centenary of Gopal Mukherjee, a hero of “Hindu resistance and backlash” who played an important role in the infamous Great Calcutta Killings in 1946. Better known as Gopal Patha (goat), because his family that ran a mutton shop, was born into a Brahmin family.

He joined nationalist radicals during the Quit India Movement in 1942, “secured” a few American small arms and grenades from some American soldiers after the second world war which, in his own words, were used to kill Muslims in the riots that followed Jinnah’s call for “Direct Action” on 16 August, 1946, through which the Muslim League had hoped to further their demand for a separate nation.

The outfit had plastered multiple parts of the city centre with posters that paid homage to the “manly Bengali,” now dead, and called on his “effeminate” compatriots to rise up and become “defenders of the beleaguered Hindus” and “protect the honour of [their] women.” It is Ghosh’s conviction, as is clear from his rants across all mediums, that Bengali Hindus must be prepared and trained for a war — a civil war, to be precise — against the Muslims, with him leading the warriors as the reincarnation of Shyamaprasad. Ghosh is hailed by sundry American and European professors, politicians, human rights activists, and wealthy Zionists as the true “protector” of Hindus against the Muslim-Jihadist barbarity in both parts of divided Bengal. Ghosh’s astute sense of using Western patronage for his own propaganda, in post-colonial politics, could also be indicative of where the funds for his well-heeled hate campaigns come from.

The man may still sound Quixotic to unaffected ears. But, his impressive online and offline presence, which contributes to his larger-than-life image as the sole saviour of Bengali Hindus, and his constant entreaties of “balidan” or sacrifice from his followers, make his politics distinctly disturbing. Clearly, he is a self-assured demagogue whose claims of being “non-political” are only meant to hoodwink the rivals, as he works to gain enough political leverage to bargain with, both, the BJP and Mamata Banerjee, to fulfill his political aspirations in the near future.

Whichever side wins the deal, Bengal stands to lose if fanatics, of any hue, are allowed to grow unchecked.