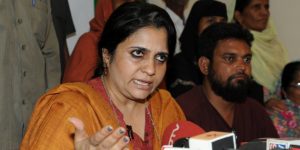 As happens in every educational institution across the country, ABVP members in Mahatma Gandhi Kashi Vidyapeeth, Varanasi, have threatened eminent human rights activist and journalist Teesta Setalvad and a group of students who organised a media workshop in the campus. Teesta Setelvad was expected to address the workshop which was scheduled at 2 pm on Tuesday on the topic “Mainstream journalism in the times of social media.”

Even before the commencement of the programme, the ABVP members disrupted the programme creating a ruckus in the campus.

“The ABVP members in the campus were threatening Teesta and us through social media platforms for last few days. Yesterday also, they took to Facebook to threaten us,” said Sandip, one of the organisers of the programme.

“Though we were facing so many threats, we tried our level best for the entry of Teesta to the campus and our team still attempted to make it possible,” Sandip added.

Earlier, when the BJP President Amit Shah had addressed a programme, which was held on the campus, these people had kept mum that time, Teesta added.

“We will conduct this programme at any cost and the students over there are fighting against these regressive forces,” said Teesta who is on her way to the campus.