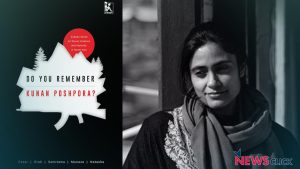 On 23rd February 1991, 27 years ago, Indian armed forces entered the twin villages of Kunan and Poshpora in Kupwara district of Kashmir under the guise of a cordon-and-search operation. The soldiers dragged the men of the villages out of their homes to three ad-hoc interrogation centres set up in houses and barns in the village. The women, now alone in the houses, were then raped. No woman was spared that night, minor girls, teenage girls, married women or older women. The men were brutally tortured all night. The army made no attempts to look for any militants or weapons.

27 years from that day, there has been no action against the perpetrators as the Indian army continues to enjoy impunity and protection granted by the Indian state.

While the initial demands for justice by the survivors of that fateful night were ignored by the state, in 2013, a group of Kashmiri women started the struggle again. 50 women filed a Public Interest Litigation (PIL) to re-open investigation into the Kunan Poshpora case.

Newsclick spoke to Natasha Rather, one of the petitioners in the PIL, and one of the authors of Do You Remember Kunan Poshpora?, about the history of the case and the current developments.

After the rapes and violence first took place in Feb 1991, the villagers filed complaints and tried to get justice for a long time. Can you tell us about what happened in those years before the PIL? How did the government and the judiciary treat this case?

The mass rape and torture in Kunan Poshpora took place in the intervening night between 23rd and 24th February 1991. The FIR was registered after almost a fortnight, on the 8th of March 1991. The case was closed as untraced by the Jammu and Kashmir (J&K) Police in October that year. The survivors approached the State Human Rights Commission (SHRC) in 2004. In 2011, SHRC ordered fresh investigations into the case and compensation for the survivors. There was no action taken on the SHRC order. Following this, a group of 50 filed a PIL in 2013 for reopening the case.

In all these years before the PIL was filed, there have been denials from the Army and the Indian Government, who refuse to acknowledge that the rapes happened. BG Varghese, in a report called ‘Crisis and Credibility’, called the mass rape a “militant hoax” and accused women of “acting at the behest of militants”. The then Divisional Commissioner, Wajahat Habibullah, in his confidential report wrote that he doubted whether the allegations of rape were true and recommended investigations. The government machinery has been complicit in trying to silence the people, to frustrate them with denials and accusations against the people of Kunan Poshpora.

What are the developments that have taken shape since the case was reopened after the PIL you filed in 2013?

The PIL filed in 2013 by the Support Group for Justice for Kunan Poshpora (SGKP) for reopening the case was not admitted by the High Court stating that it was premature. The J&K police filed the closure report for the case after the PIL was filed – 22 years after it was closed as untraced in 2013. The survivors approached the Sub-Judge, Judicial Magistrate, Kupwara who ordered further investigations within three months. There was no action taken by the police, following which the survivors filed a fresh petition in the High Court for orders on compensation and reinvestigation following the SHRC recommendation. The army approached the High Court and got the orders for compensation and investigation stayed. J&K Government challenged these orders in the Supreme Court of India in Dec 2014 for a ruling to not pay compensation. The Union of India in 2016 filed a fresh petition in the SC questioning the SHRCs jurisdiction for passing an order in 6 cases involving the armed forces, referring to AFSPA. The Supreme Court stayed the orders for reinvestigation and compensation in 2016. The case remained in the registry of the Supreme Court for 3 years but has not been listed for hearing.

What is the status of the compensation? Why do you think it has not been given yet? Is it another way to protect the army?

The compensation has not been paid to the survivors. Paying the compensation would mean that the Indian Army accepts that the mass rape and torture did happen in the village, something that they have been denying all through these years. But where the question of compensation is concerned, it is important to mention that in 2012, the then MLA of Kupwara paid 39 families an amount of Rs 1 lakh each and an additional Rs 25,000 to a survivor who was disabled. But through an RTI, we came to know that no money had been paid to the survivors as compensation.

In your book, Do You Remember Kunan Posphpora?, you write, “People in Kashmir ask us why we have filed the petition, can we expect justice from the oppressors in their own court?” The judicial system of the state and centre has repeatedly failed the Kashmiri people. What made you all still file this petition and fight the case?

The PIL was filed after the Nirbhaya Gang Rape case shook the entire country and people were out on the streets. People were discussing sexual violence but no one was taking about the systematic form of sexual violence perpetrated in Kashmir by the Indian Armed Forces. It is true that no case of human rights abuse involving the army has ever been tried in a civilian court and the pursuit of justice is never ending, but to reopen the case and talk about the rape and sexual violence by the Indian army as part of its counter insurgency operations in Kashmir was important to break the culture of silence, which the State is so comfortable with. This case especially needed to be talked about because the survivors had chosen to speak up in a social and political milieu where these discussions were discouraged. The people of Kunan Poshpora chose to fight, knowing that justice may just be a dream. Their struggle was inspirational. It had to be talked about. Hence 50 women got together to file the PIL aimed at breaking the silence, seeking answers to the crime that the Indian state conspired to pass off as a “blatant lie”.

In the chapter you have written in the book, you talk about rape as reprisal, and how rape is also linked to the idea of nationhood. You also describe the different manners in which rape is used as a weapon by the oppressors, and what kind of effect it has on the people. Can you tell us about that?

In Kashmir, rape/ sexual violence has been used widely as part of the counter insurgency operation by the Indian Armed forces. We talk about Kunan Poshpora here but it is not the only case of mass rape. There are other incidents but those survivors remained silent while people from Kunan Poshpora fought a legal battle. Sexual violence has also been a part of torture of men. Passing electric current through the penis and inserting objects into the rectum have been widely reported by torture survivors. Many men were rendered impotent through sexualized forms of torture. While torturing the men is an attack on the individual and his idea of manhood, sexual violence against women is aimed at humiliating the entire community, since honour is attached to women in patriarchal societies like ours. Many of the women who were raped were related to militants. The women from Kunan Poshpora were raped because they were believed to be “militant sympathisers”.

You also repeatedly talk about the importance of keeping this incident alive in public memory. Why is it important, particularly in a place like Kashmir where human rights violations are regular occurrences?

If violence is the Indian State’s weapon to repress the people of Kashmir and crush our struggle for Azadi, memory is our tool to counter it. India has an atmosphere of fear in Kashmir and has been comfortable in the culture of silence. People have been prevented from exercising their civil and political rights, justice has been denied strategically so as to wipe out memories of incidents of human rights violations. But memory is what has kept the struggle alive and memory is our greatest tool. Forgetting would amount to being complicit with the Indian State’s tactics of repression. Remembrance is important for resistance. So we keep the memories alive and we continue to resist India’s unwarranted rule in Kashmir.