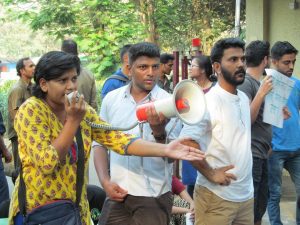 Tata Institute of Social Sciences students continued to be on strike on Thursday, protesting the fee hike as well as the withdrawal of aid to students from marginalised communities and backgrounds. The strike originally began on Wednesday, February 21 when in a historic show of resistance and solidarity, the students boycotted all classes, field work and got exams cancelled.

Responding to a call given by its students' union, over 500 students blocked the main gate protesting the rollback of financial aid to SC, ST and OBC students (including religious and other minorities). The blockade at the main gate continued on Thursday, as the administration had on Wednesday asked for a 24-hour time period in order to respond to students' demands. The students feel that this could be the tactic of the administration to delay any commitments on their part and take the steam off the struggle which is currently seething with the outrage of the students on an extremely anti-students move. 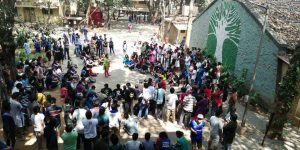 Archana Soreng, TISS students' union president elaborated on the need for the protest saying, “The first method we adopted was that of negotiations with the administration and we have been in a constant state of dialogue for past one month. But now we are at the end of the semester and suddenly we are intimated that the financial aid will be stopped for the students. We are left with no option but to protest this move.” As per a press release issued by the Union, students from across Hyderabad, Guwahati and Tuljapur campuses have also joined the protests.

The students who were earlier eligible for the Government of India Post-Matric Scholarship (GoI-PMS) will be most impacted by the decision of the institute to rollback financial aid for students. This exemption was in line with the institute's policy to facilitate the entry and sustenance of students from marginalised background into spaces of higher education, since it boasts of values of social justice and its expertise in training students for social work and empowerment.

“I took admission in the 2016-2018 batch and before that there was no such notification about a hike. Even the UGC guidelines say that the entire fees structure has to be explained in the prospectus of the institute so that students can apply with the knowledge of the fees structure. Here we are witnessing a situation in which the students came to know only at the final stage of admission process that they will not be able to get the financial aid or otherwise, in the middle of their courses. How is that fair,” questioned Archana who has been at the forefront of the protests since yesterday. 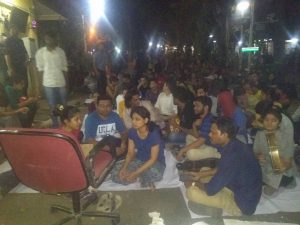 Oddly enough, a statement issued by TISS registrar, callously shrugs off all responsibility on TISS's part as a University, and appears to transfer the blame to the Government of India. It reads:
“The Government of India Post Matric Scholarship is paid by the Social Welfare Department/Tribal Welfare Department of the respective state government on receipt of an application submitted by the student. The institute plays no role in the scholarship disbursement process, except certifying it. These scholarships are transferred directly to the bank accounts of students. The institute has not stopped the facility. TISS is following all the guidelines of the Government of India."

Over the past many years, there has been a slow rollback of all forms of financial aid to students, accompanied by drastic measures such as exponential increase in fees, introduction of surveillance, biometric data collection for attendance and other administrative purposes as well as a host of other unpopular moves.

Highlighting the contradictions in the values and actions of the premier institute, Archana said, “The institute's moves go against the ethos of social justice. Why can't the institute come up with a proposal for students from marginalised backgrounds and update it on their website? Currently nothing is mentioned about the institute's erratic moves on fee structure and hikes as well as rollback of aid.” 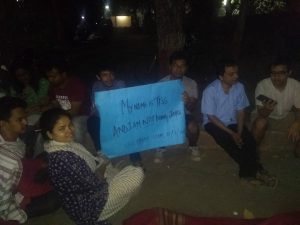 Currently, the average fees of TISS amounts to an exorbitant sum of Rs. 70,000-80,000 per semester. While on the one hand the institute cites curtailing in fund allocation a reason for rollback of such aid, it is not hard to notice the expansion it is making in its logistics, wherein several new centers have been opened up recently. An estimated number of more than 500 students will be impacted by this specific move. The enrolment of students from OBC category already saw a drop of 9%, as per the claims of students’ union.

The atrocious fees amounts charged by TISS are not at par with any of the other Central university fees such as JNU, EFLU, HCU etc. The institute has tried to defend the high fees that it charges by calling itself a Premier Institute. It also compares itself with other elite institutions such as IITs and IIMs, though their exclusivity is well known.

“Though the immediate issue for us is fighting the fee rise, this is definitely part of a larger policy measure in which institutions of higher education are rapidly being privatised. If an institute becomes an A grade institute, and has a fees structure of Rs. 9 lakh how can one imagine that students will be able to afford this. Even the faculties are bound to be impacted by this kind of privatisation,” asks Soreng.

In a statement released on February 21, the concerned alumni of TISS alleged, “These actions will result in complete absence of students from oppressed communities to participate in higher education in TISS, as the financial aid and GoI-PMS cannot match the fees. Also, with the introduction of Direct Bank Transfer of scholarship, the institute has washed its hands off any responsibility of providing fee exemption arguing that the scholarship is an individual transaction between the student and the government.”

Drawing attention to the anti-students' nature of the current dispensation, Shefali Saini, a student of MPhil at TISS said, “The government is completely against the students from marginalized sections. It has been anti-students from the time it came into power. The current regime wants the hegemonization of knowledge in only a few hands, namely those from the upper caste, class privileged people and they want to completely disregard the historic struggles of disenfranchised communities to enter the spaces of higher education. In last few years the specific targeting of Muslims, Dalits, Adivasis and others has been evident. Hence I feel that such moves of the government should be resisted across campuses.”

Apart from demanding a retract of the notification for present GOI-PMS students to pay for fees (tuition, DH and Hostel), the charter of demands also includes demands for exemptions from DH and Hostel fees for the students of BA MA integrated programme and a symbolic representation of the Office of Dean SPO from SC ST OBC category. Students have also sought disclosure of quantum of losses by TISS due to payment of scholarships, year-wise details of funding from UGC and other relevant expenditures such as on dining and hostel facilities.