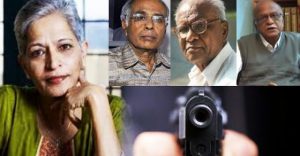 The Hon’ble Prime Minister of India,

Ministry of Railways, Government of India,

Recently there has been continuous effort to destroy the long cherished pluralist heritage of India. Our country enjoys more than two thousand years heritage of rational schools of thought. But today, this rational mind is at the center of all attacks. The destroying forces are not only satisfied by twisting and suppressing historical facts, but are equally aggressive in growing an anti-scientific temperament and resorting to full-fledged violence in the society. They are openly assassinating prominent and critical thinkers like Dabholkar, Pansare, Kalburgi and Lankesh, continuing the tradition assassination, which started from Gandhi in independent India. It seems that these people are a part and parcel of those international terrorists who in Bangladesh have been slaughtering the free thinkers there.

It is absolutely clear that these goons are playing stooges to some more powerful political forces whose dire need is to erase the first sentence of the Preamble of our Constitution.

Commemoration and reminder of history, generating mass consciousness and sentiment through dedicating public spaces in the name of significant historical figures and martyrs is a commonly used instrument of all Governments. But a hateful ideology today seeks to erase all egalitarian and inclusive ideas of economic and social justice. Crude and blatant attempts are going on to erase the names and struggles of liberal and progressive individuals from the Indian independence history. Renaming public places in the name of little known people with negligible contribution in national freedom struggle is a part of an ironical and dangerous re-branding of the imagination of Indian nation. Hence, the current scenario calls for a larger and stronger unity among our country men to save the idea of India.

We demand faster investigation and punishment of the killers of Dabholkar, Pansare, Kalburgi and Lankesh. We think that the Government of India must take immediate action to let each Indian citizen realise that the Government is not at all sympathetic to these terrorists.

We also demand that four public places, preferably four rail stations should be identified in the two states of Maharashtra and Karnataka, the nearest ones to the four locations of their assasination, which are still dripping with the blood of Dabholkar, Pansare, Kalburgi and Lankesh.

We, the following signatories, demand those four stations to be renamed after these martyrs immediately.

Hannan Mollah, General Secretary of All India Kishan Shabha and ex-Member of Parliament

Dipali Bhattacharya, Painter and ex-Principle of Government College of Art and Craft, Calcutta