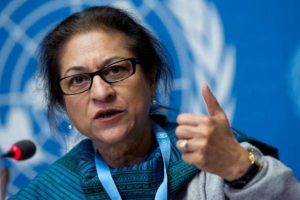 “ To meet Asma Jahangir was to meet women empowerment in real terms. She relentlessly fought for human rights, women rights and for rights of minorities in Pakistan . She began her crusade at the young age of 20 against military rule of Zia Ul Haq which was the darkest period of Pakistani history,” said Ms Nirupama Subramanian, Chief Editor , India Express. She was narrating her personal experiences with Asma Jahangir when  she met her on many occasions. Ms Subramanian further told that Asma was branded as a agent of RAW, CIA, MOSAD etc. by the Pakistan regime. She said that real tribute to Asma Jahangir will be to learn to fight like her .

Prof. Chaman Lal ex President , JNUTA said that Asma was given the title of "Lioness of Punjab" by the people  when she began her struggle against the dictatorial regime of Zia Ul Haq at the young age of 20.  “ She had many firsts to her credit . She was the first to form Pakistan Human Rights Commission and was its first Secretary General. She was also the first to form an organisation DASTAK which a home to deserted women. She formed Legal Aid society for the first time in Pakistan, “ said Prof. Chaman lal. He told that she fought many legal battles against human rights violations and to get justice to women by citing many examples.