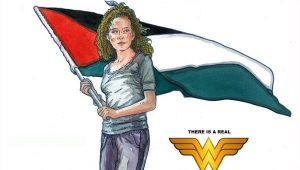 “There is a real Wonder Woman” is the title of a new painting from Irish artist Jim Fitzpatrick, who is famous for drawing the iconic 1968 poster of Marxist revolutionary Che Guevara, depicting Palestinian imprisoned teen Ahed Tamimi as a superhero.

Fitzpatrick said he was amazed by Tamimi’s bravery when he first learned of her two years ago. “Ahed Tamimi, to me, signifies nobility in the face of oppression. This is a kid, a child,” Fitzpatrick told Newsweek magazine in an interview earlier this week.

“When I was 15, I think I would have been petrified. Wherever she’s getting her courage from, there’s a resonance of it echoing across the world. I’m just a part of it. There are organizations doing more than I could do, but I do think the pen—in my case, the brush—is mightier than the sword.”

He also said the title of his latest painting is directed at Gal Gadot, the former Israeli soldier-turned hollywood star who was the star of the latest “Wonder Woman” movie and has publically come out against Palestinian rights. “That’s deliberate … I think: Hold on, there is a Wonder Woman, and it’s this kid,” the renowned artist further told the magazine.

“I’ve been collecting comic books all my life. I’ve been a guest at San Diego Comic Con. I would not say anybody in that [comic book] community has an idea that she was an IDF soldier and supports the persecution of Palestinians as young as Ahed Tamimi. I think they’d be shocked if they knew that.”

In December Ahed was arrested and indicted on 12 charges including assaulting an Israeli soldier and throwing stones after a video of her slapping an Israeli soldier in her home’s yard went viral. It was revealed later that the Palestinian girl was upset after soldiers had shot her 14-year-old cousin in the face a day earlier.

The teen, who turned 17 behind bars last month, has received large international attention and solidarity since her arrest as many prominent actors, artists and academics in the United States and other countries signed letters and petitions calling for her release.

Fitzpatrick said that he fears for her life as many in Israel are calling for sentencing her to life in prison or even executing her over “insulting” the Israeli occupation. “I’m afraid they’re going to kill her. And that’s why I’m doing what I’m doing,” he said in an attempt to echo the international campaign he kicked off against injustice with his Viva Che painting.

Over the years Ahed gained international attention for her brave actions against Israeli occupation forces during protests and clashes in and around her village. In 2015 a video of her, along with female members of her family, went viral showing her fighting an Israeli occupation soldier who was pinning down her 12-year old male cousin.