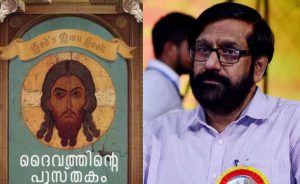 After accepting the Sahitya Akademi Award I now come to your midst in order to make a symbolic, moral gesture. Let me explain briefly. The book that earned me this award is God's Own Book which is so to speak my extra grief at the present plight of the world and humanity, and writer's imaginative struggle to renovate them.

But beyond this, in the present Indian situation God's Own Book (Daivathinte Pustakam) carries out an enormous political mission as well, And that is to uphold the love of other religions cherished by true Hinduism, To Build a conceptual foundation for religious amity, to Put up a bulwark against the country's catastrophic slide into communal ruin, Daivathinte Pusthakam is a book where the Prophet  Muhammad Nabi, calls Krishnan "ikka" (elder brother) and Krishnan affectionately calls the Prophet "Muthe" (precious dear). They are presented as if they are brothers. Both Krishnan and Nabi, who share a number of personality traits, who go through life's predicaments that are similar, do not ask their followers to engage in conflicts but to live in love and harmony.

Since this is the message that the novel presents, I have the obligation to disseminate it on the occasion of the Award function too, that is why I shall now take only three rupees from the award amount, and leave the rest to Junaid's mother (Ammi). Junaid is one who was killed by Hindu communalists just for being a Muslim. Let me place this award amount as an offering at the feet of Junaid's mother, thus doing penance for that wicked sin, for penance is a special observance in the true Hindu tradition. Yes, I am a true Hindu, l am a true Hindu.

What was the Incident?

Junaid Khan, a 16 year old boy and his brothers and cousin were returning to their village in Haryana on June 22, 2017, after a day-trip to Delhi to shop for Eid when a murderous mob turned on them. The crowd shouted communal abuses at the Muslim men, also yelling they were "anti-nationals." Junaid's brother Haseeb's cap was pulled off his head and his beard was tugged because they looked "Different". At last Junaid was stabbed to death, and his body was later thrown off the train at railway station, Just 30 kms from New Delhi. Junaid, was killed just because he happened to be Muslim, had new clothes for Eid celebration with him.