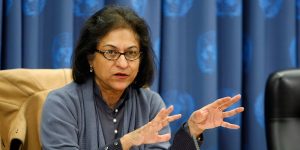 The death of Asma Jahangir has been received with sorrow, anguish and a great sense of loss by people all over the world, especially in Pakistan and India.  She was a woman of rare courage and indomitable commitment to women’s rights and human rights, a commitment that never wavered despite the many attacks that she faced from the Government of her country, religious fundamentalists and many others.

Asma started her career as a lawyer defending women against domestic violence and unequal laws but went on to fight for bonded labour, and minority communities under attach.

Founded WAF(Women’s Action Forum) along with a band of brave young women that was in the forefront of demonstrations for women’s rights.  During the Zia regime, it was WAF that dared to come out on the streets against the obnoxious Hudood laws. Asma and others were beaten and dragged by their hair by the police but this did nothing to dampen their spirits.  Later, the  Zia regime passed a resolution in the National Assembly that sentenced Asma to death for blasphemy.  She was sent to jail in a remote corner of Pakistan and was only released after another brave woman lawyer convincingly argued in her favour and forced the Government to release her.  This incident left Asma unfazed and she went on to defend the Masih family itself accused of blasphemy.  This was responsible for an attack by armed men on her mother and other family members.

Asma was the founder of the Human Rights Council of Pakistan and also the President of the Supreme Court Bar Association.  She served as UN Special Rapporteur for the Freedom of Religion and had visited India and other countries in that capacity.

Asma was rare in her uncompromising quest for justice and defended persons facing persecution who had opposed her on many occasions.

She will be remembered for these sterling qualities and, at a time when religious fundamentalism is becoming a grave threat in our own country, her example will inspire us in our battles to confront its many dangers.

AIDWA salutes Asma Jehangir, the tireless and unflagging fighter for women and oppressed people.  It salutes Asma Jehangir who refused to be cowed down by military dictatorship, by religious fanatics and misogynists in her own country.  Her memory will always inspire us in our struggles for equality and justice.