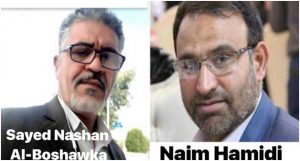 Two journalists in the Arab region of Ahwaz in Iran have been summoned to appear in a regime court after they condemned the deteriorating standards of education in the region, which are the worst in the country.

Mohammed Taki Zadeh, the head of the regional educational directorate in Ahwaz regime, who resents any effort to publicise the racism of its policies towards Arabs, Kurds, and other minorities, immediately filed a complaint against Hamid and Al-Boshawka, accusing them of spreading false information and misleading public opinion. Both men have received court summons requiring them to answer the charges.

Hamidi is the director of the Asr Ma news website and Al-Boshawka is a prominent Ahwazi satirist. In their articles, the journalists criticised the education directorate’s appointment of more than 32,000 ethnically Persian temporary teaching staff at Ahwazi schools, with most of these teachers brought to the region from other areas of Iran, as well as condemning the woeful state of the education system in the region. Currently, the Arab Ahwazi region stands at the very bottom of the national education quality ranking.

Taki Zadeh, who succeeded the previous regional education chief, Rahman Falahi, in December 2013, is the eleventh official appointed to the position in recent years.  He is widely unpopular, overseeing a steady decline in the already poor education standards in the region, as well as being notorious for his openly racist policies towards the indigenous Arab Ahwazis.  Literacy levels in the region have fallen in tandem with educational standards, with the number of functionally illiterate adults in the region are now over 59,000.

Under Taki Zadeh, parents have set up makeshift schools in caravans to provide a safe education environment for their children. No funding is available for repairs to existing schools, many which are dangerously dilapidated. Many of these schools are simply bare, flimsy one-or-two-room buildings incapable of withstanding the harsh climate and weather conditions in the region.

Enterprising parents in the Al-Masoudi district, in the destitute town of Dar khwain west of the Ahwaz regional capital, were so angered about the conditions their children were forced to endure at school—due to the  education authorities’ deliberate negligence—that they approached charitable organisations for money to purchase a caravan, which they turned into a makeshift school. This is not an isolated case; even Taki Zadeh himself admits that there are currently 600 makeshift schools in the province. News reports confirm that dozens of school buildings have had to be abandoned after falling into such disrepair that they were unfit for use.

In another area of Ahwaz, Abdel-Rahim Tabishi, an advisor to the governor of Ahwaz, declared Taki Zadeh personally responsible for the shockingly poor quality of education in the province, particularly in the city of Muhammarah.

The discriminatory policies pursued by Taki Zadeh are not confined to the areas of education, with Ahwazi children routinely subjected to racist abuse by ethnically Persian teachers, including punishments for speaking their own native language, Arabic, rather than in Farsi.  On November 4, 2017, designated as Student Day in Iran, the young pupils at a primary school for girls in a neighbourhood of the Ahwazi capital, Ahwaz, were reportedly forced to write out the sentence “Speaking Arabic in the classroom must be avoided at all times” 100 times as a penalty for speaking their own language.

In a similar case, pupils from the Hamza girls’ elementary school in the village of Beit Mohareb, near Ahwaz city, reported being insulted and punished by a Persian teacher named as "Miss Shushtari" for speaking Arabic. Similarly, the girls were forced to write out sentences 100 times promising not to speak their own language, Arabic, in the classroom.”

Although angry parents and civil society organisations condemned this blatant racism, Taki Zadeh insisted that the teacher had committed no wrong doing and defended her, refusing to dismiss her.

Ahwazi school pupils are also routinely physically abused by teachers, with one school headmaster reportedly hitting a 12-year-old boy so hard for a request to swap places in a queue with another child that he ruptured the child’s eardrum. But despite documented abuses, as Ahwazis, the children and their families have no recourse to legal action against regime officials, especially ethnically Persian ones. Speaking on condition of anonymity to avoid any reprisals by the regime, the boy’s father said, “Two days ago, my 12-year-old son, when he asked his classmate to swap places, he got punished by the school’s headmaster, who slapped him without any warning while he was in a queue that it led to the rupturing of his eardrum.”

In one particularly tragic case, a 12-year-old boy, Elias Sharifi, from the town of Howeyzeh, killed himself on December 25 after persistent racist harassment by an ethnically Persian teacher culminated in actually fining the boy for “writing more homework than necessary.”   Elias went home and hanged himself with one of his mother’s scarves. His mother found him and desperately rushed him to a clinic, where medical staff pronounced him dead shortly after his arrival.

Amongst other examples of Taki Zadeh’s negligence, he also refused to take any action to prevent a school in the Alawi area of Ahwaz from being turned into a regime security facility, leaving the children with no school building.

In light of TakiZadeh’s unconscionable record, the Ahwazi Human Rights Organisations strongly condemned the official’s complaint and the decision to summon the two journalists to court simply for bringing attention to injustices.   The Ahwazi rights groups also denounced Taki Zadeh’s efforts to muzzle the press and silence civil society activists in Ahwaz, and called for ensuring respect for freedom of speech and allowing media outlets to convey the wholly justified concerns of citizens who are critical of the deterioration in the education sector in order to fight discrimination.