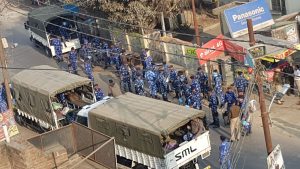 People’s Alliance for Democracy and Secularism (PADS) condemns remarks made by the UP Dy CM Mr KC Maurya against District Magistrate of Bareilly as pure intimidation and a brazen effort to browbeat officers who express their opinion against communalism.In an FB post put up after the recent Kasganj communal violence the officer Mr Raghvendra Vikram Singh had questioned the increasing trend of forcibly entering Muslim neighbourhoods and victimizing residents under the garb of nationalism. Another officer of the state,Rashme Varun of Saharanpur had also expressed similar sentiments in her FB post. She also referred to events in Saharanpur last year when the local BJP MP had led a march in a Muslim neighbourhood without official permission, and when the district police officer intervened his official residence was attacked by Hindutva goons.After attending a function of an RSS organization Mr Maurya had warned that the Bareilly DM had no right to put the FB post, and that officer should not speak ‘like spokesman of political parties’. Mr Singh was also summoned to state capital for an explanation. Both officers removed their posts after it became clear that the state government will victimize them.

It has been a longstanding effort of the RSS and its organsiations to communalise state institutions. BJP governments at Center and states are doing it in clear violation of constitutional provisions.The BJP and its governments also encourage communal goons to attack public offices, as happened at the District Sessions Court of Udaipur in Rajasthan after murder and burning of Afrazul. Such communal intimidation and threats are meant to make bureaucracy a pliant tool of RSS’s communal agenda.Socially aware officers like Mr Singh and Ms Varun are a big obstacle in these plans.On the other hand, such officials are essential to fulfill the constitutional mandate of public service in the country.In another instance a senior police officer of UP was seen taking a public oath to build Ram temple at the place of demolished Babri mosque in Ayodhya.It is significant that the IPS Association has condemned the act and emphasized the ‘ethos of neutrality, fairness and uprightness’ necessary for police. When the BJP and its governments are hell bent upon violating secular provisions of the Constitution, it is necessary that more and more officers like Mr Singh and Ms Varun come out openly against its communal designs. PADS offers moral support to all such officers who value their social conscience and commitment to Constitution more than diktats of communal governments.