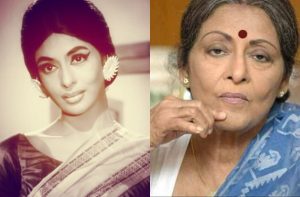 The “Neeta” of Meghe Dhaka Tara is no more.

Supriya Choudhury, whose talent was sucked into the towering screen presence of her co-star and partner Uttam Kumar, will still remain archived in the history of Bengali cinema by virtue of her sole performance as Neeta in Ritwik Ghatak’s classic film Meghe Dhaka Tara.

Choudhury passed away on January 26 this year. She began her career with a side role in Bosu Poribar and rose to become one of the topmost glamorous stars in Bengali cinema. The honours due to her came her way much after she had almost quit the screen, both big and small. She won the Filmfare Award and the BFJA Award twice. The Banga Vibhushan was bestowed on her by the Government of West Bengal in 2014 and the Padma Shri by the Government of India for her rich contribution to Indian cinema in general and Bengali cinema in particular.

She has acted in many films but will be remembered for two Ghatak films, the other one being Komal Gandhar. Her dancing skills came to the fore in Amrapali where she portrayed the title role and drew flak for her dare-and-bare costumes in the film. other films she was noted in are – Shuno Baronari, Sonar Harin, Uttarayan, Moddho Raater Tara and many more, most of them opposite Uttam Kumar who began to live with her after they fell in love.

In her entire career, she has worked in around 50 feature films and became a small screen icon with her title role in the immensely popular Meghe Dhaka Tara will remain archived not only for Ghatak but also for Supriya Choudhury’s performance in the lead role of Neeta and the creative musical score that drew from different schools of music throughout the film.

Meghe Dhaka Tara paints a brutally frank picture in stark black and white images, of the family as a cannibalistic consumer of one of its own members. The characters are black and white. Nita, her father and Shankar are the "white" characters. Gita, Montu and their mother are the 'black' ones. Sanat is somewhere in the middle of these two extremes. He is weak, spineless, indecisive and finally, as cannibalistic towards Nita as the others. In Meghe Dhaka Tara, Ghatak seamlessly weaves in metaphors of violence.

Nita accepts the family's ‘moral’ right to control her on the basis of its emotional power over her. These are elements that thrive in her acceptance of her victimizers – her family and Sanat, the man she loves. She once confesses to Sanat: "My sin is that I have never ever expressed by protest against any wrong. Really, I should not have been quite so ordinary."

“Ordinary” here is a pointer to the unquestioned acceptance and tolerance of violence by women like Nita. Violence exists in Nita being coerced to give up her music, an art she is genuinely talented in. She is denied the right to continue her studies, suggesting the violence of denial. She is not even aware that her economic responsibility vests her with power.

Would she have used her power had she been aware of it? Not really, because she is simply not made that way. Her ‘chemistry’ is different. Her changed status within the family –from being a young woman with simple dreams of marriage and education – to one who is burdened with a responsibility she buckles under – does not change her in any way to make her use, misuse and abuse her power. In Nita's case, violence sets a strikingly unusual example of the weak exploiting the powerful.

Interestingly, Nita's example does not necessarily throw up notions of gender violence based on patriarchy. Violence within Meghe Dhaka Tara is gender-neutral. The film presents a classic example of the violators being victims themselves. It throws up the reality of the victim becoming the victimizer.

In Meghe Dhaka Tara, the narrative unfolds against the backdrop of refugee colonies concentrated in Jadavpur, Netajinagar and Bijoygarh. The film opens with Nita halting to pull at a torn slipper on her way to work. She is the only earning member of a sprawling refugee family and cannot stop to have her slipper attended to by the wayside cobbler.

The closing shot completes the circle. This time, it is not Nita, but an anonymous girl who takes Nita's place to feed her refugee family. She falters because her slipper is torn. Her gait and her body language is a duplication of Nita's. She quietly takes on from where Nita left off.

That single leitmotif of a torn slipper, used as a framing device is Ghatak’s strong indictment on Calcutta. Calcutta, in Meghe Dhaka Tara, sustains the vicious circle of poverty and social injustice almost with a vengeance. Nita's death, in this sense, is not a moral lesson from Calcutta to its massive refugee population. Rather, it is a sustained threat, a warning that wears a pervasive, real and violent face.

In the end, her family "consumes" her as fatally as her tuberculosis does. One is not sure about whether it is TB that takes her life or whether her family has virtually "killed" her. The line between the family's brutal cruelty towards her and the spread of tuberculosis within her body gets blurred as the narrative moves towards its dramatic climax.

Her desperate cry "Dada, I want to live," underscores the family's casual indifference to Nita as a human being and as the sole earning member of the family. The family as "consumer" of the very member who holds it together marks the uniqueness of Ghatak's presentation of decaying values in the impoverished scenario of the refugee family.

Ritwik Ghatak had a unique and perceptive vision. It was a vision that assimilated the searing spectacle of partition, the black memory of refugee camps, the degradation of rootlessness, the dehumanisation of the alienated and the emerging definitions of a new class struggle.