Malayalam poet Kureeppuzha Sreekumar was attacked by RSS and BJP activists on Monday, 5 january 2018, after a speech that he delivered at the Kairali Library at Kottukkal in Kollam district, Kerala. The Indian Cultural Forum talked to the poet about the incident and about the increasingly number of attacks against writers, artists, and thinkers in the country. 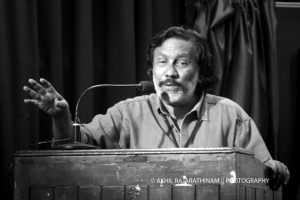 Sreelakshmi(SL): On Monday, you were abused and physically assaultedby right-wing groups, allegedly in reaction to a speech that you delivered at Kairali Library. Could you talk a little bit more about what actually transpired?

K Sreekumar (KS): The main issue here is not how I was attacked. Through my speech, I was trying to promote a certain kind politics, a politics that is critical of rising religious fundamentalism.

It was an attack by the religious extremists on secular thinking and ideology. My speech dealt with the importance of preserving public land for future generations.  Today, all the public lands are being occupied in the name of religion. Religious shrines are being built in common lands, with boards prohibiting the entry of people belonging to other castes and religions. I wanted people to wake up and open their eyes towards these issues. At the end of my lecture, I gave the recent example of Vadayampady in Ernakulam district. A specific piece of land in Vadayampady has been a public land for centuries; but, recently, this land was occupied by some fringe groups.  Today, a “caste-wall” has emerged between the dalits and non-dalits. People should fight against such caste and religion based discrimination, regardless of their own religious beliefs. But, it is only the Left forces who have chosen to take action against the developments in Vadayampady.

Recently, on the artist Ashanthan’s death, the local Shiva temple authorities near the Durbar Hall protested against the Lalitha Kala Akademi members keeping his body for public viewing. The temple was celebrating its annual festival at the time. Around 20 Congress supporters abused the Akademi members and tore the posters of Ashanthan's condolence meeting. The Akademi members were forced to remove the artist’s body, which had been kept in the main hall, through the back door.

We need to speak up against such religious beliefs that forget humanity. Kerala does not belong to a single caste or religion. It is the land of social reformers like Sree Narayana Guru, Ayyankali, Sahodaran Ayyappan, and Poykayil Appachan; and, in a secular state like this, we need to raise our voice against such religious fundamentalism and extremism.

SL: After the attack, the BJP has become defensive about its action. BJP state secretary K Surendran has accused you of having stirred this controversy for fame.  What would you like to say in response?

KS: I don’t think there is any need for me to try and rake up such a controversy in order to gain popularity. Two years back, I had organised a march, along with my colleagues, that lasted for 14 days. The march was on “Beyond Secular and Cultural Practices,” and stretched from Kasaragod to Thiruvananthapuram. Besides, I have been a part of the literary circuit since my school days. I have been given enough awards, including awards from the Kerala University, the Kerala Sahitya Akademi Award, and the Vyloppilli Yuva Kavi Award.  My poem, “Amma Malayalam,” is recited by children in youth festivals.  Another one of my poems, “Jessy,” is sung by students in colleges even today. I don’t think the BJP spokesperson, K Surendran, has any knowledge of literary merit. I don’t know what kind of poems he reads. I don’t need controversies to become popular.

See, I don't believe in caste or religion. I became a rationalist at the age of 16 and I am happy that I am not the only rationalist in the country. Vayalar Ramavarma, Thoppil Bhasi, N N Pillai, Ponkunnam Varkey, they all stood for a secular and rationalist thought. Vayalar, for instance, had written, “Man created religions, religions created gods, man and religions and gods divided the land, divided minds.” I have only reiterated what they said. My writings are appreciated by the people; my books are selling well. I don’t need any further validation. I don’t think I need to justify myself to groups that indulge in mob violence.

KS: A writers’ weapon is his pen and it can never be broken. Writers don’t need to boy in front of any government or authority.  We have a rich history of non-cooperation movement in our country. Even during the Emergency, we saw a lot of restrictions on political movements. But, when it comes to cultural movement, we have every right to refuse to accept such restrictions. No one can curb a writer’s freedom of speech and expression.