old post
Is it possible for Gandhians and Ambedkarites to engage in a dialogue?
February 8, 2018 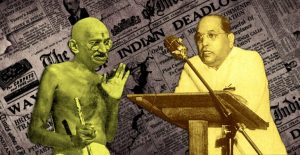 The third national convention of Dakshinayan Abhiyan, called Samas, took place on 29 and 30 January, 2018. On the opening day, Ganesh Devy, the founder of Dakshinayan Abhiyan, explained the relevance of the chosen name, “[Samas means to] connect units of meaning to produce new meaning; and, since [this] Nagpur convention is [about] bringing [various] thoughts together, it is called Samas.”

Prakash Yashwant Ambedkar, grandson of Dr B R Ambedkar, and Rajmohan Gandhi, grandson of Mahatma Gandhi, addressed the convention in Gandhi’s Sewagram Ashram in Wardha, and in Deekshabhoomi, both in Nagpur, respectively. The convention was a coming together of writers, activists, and artists from across the country, all of them united under the banner “Where the Mind is without Fear”, taken from the poem “Chitto Jetha Bhoyshunno” (Where the Mind is without Fear) by Rabindranath Tagore.

Both the historical figures, Ambedkar and Gandhi, are being appropriated by the current BJP government. As Ali Khan Mahudabad says, “Political icons are easily appropriated… For some time now, and over the last two years in particular, a noticeable feature of the BJP's political rhetoric has been its appropriation of political figures whose views would sit uncomfortably with those of its own.” The ideologies and works of both these figures are a vehement critique of the anti-secular, anti-constitutional, and violent ideology of the BJP and RSS. The government, which has been cracking down on the spaces of dissent in universities has to go back in history to look at the role of Sangh Parivar in the freedom struggle and their contribution (or the lack of it) in building a democratic India. Those who opposed Ambedkar’s Constitution and those who celebrated the death of Gandhi are now ruling the state, openly attacking the constitutional rights, and killing the democratic and secular spirit of this country.

Caught up in the debates and differences between them, we often forget to notice that, despite their differences, they continued to engage in dialogue with each other and did not resort to violence. It is extremely crucial for us to remember this legacy of dialogue, between differing opinions, that existed in this country. It is crucial because it helps us be more reflective about the systematic attack on this legacy of dialogue today.

Their approach to fighting the oppression of caste system, politically and socially, was different. Gandhi opposed the Ambedkar’s proposal — a provision for a separate electorate for dalits — and he declared that he would go on an indefinite hunger strike to protest against a separate electorate. This, in turn, resulted in the Poona Pact, which was signed by Ambedkar and Gandhi on 24 September 1932 in Poona (now Pune). The Pact denied a separate electorate but guaranteed reservation of seats for dalits in legislature. The differences between the two, along with hunger strike that led to the signing of the Poona Pact, is widely cited to highlight the differences and disagreements between the two..

Debates around caste based discrimination today seem to begin and end on the question of the provision of reservation of seats for certain sections, as if caste only extends to reservation policy and the resulting job opportunities. Prakash Ambedkar said that even if Gandhi had agreed to Ambedkar’s terms, the VHP would have opposed it vehemently. In agreement with this statement, Rajmohan Gandhi said, “With the guidance of the leadership of both Gandhi and Ambedkar the Constitution of India took a shape…the Constitution that guarantees freedom of speech and expression is under threat today  because of this dispensation whose ideologues were active in 1920s and 1930s.”

Prakash Ambedkar, in his opening address, said that Gandhi was not against the reservation; he was against the separate electorate, for dalits, that had been proposed by Ambedkar. He also acknowledged that they held differing views on the manner in which reservations must be implemented. But, he went on to point out, that this difference between the two — Gandhi and Ambedkar — is increasingly being used to place the politics governed by their respective ideologies in opposition to each other.

He admitted that it is true that Ambedkar and Mahatma Gandhi represented the views of different sections of the Indian populace. Ambedkar was a strong voice against the structural violence ingrained in Hindu society in the form of its Varna Ashram, and the associated discriminatory caste practices. He led the fight against the inhumane practice of untouchability. Then there was Gandhi, a leader of the freedom struggle in India, who, based on the principles of nonviolence, led a strong mass movement against the British colonial rule in the country. Both were the important leaders with mass following; but they were standing on very different planes. They had differing world views and politics.

Prakash Ambedkar said, while addressing the gathering in Gandhi’s Sevagram Ashram on 30 January, the death anniversary of Gandhi, “Ambedkar was from a downtrodden and the exploited caste. Mobilising people for a movement against the caste was possible.” Ambedkar also highlighted Gandhi and Ambedkar’s differing opinions on the Hindu religion. The latter called on all dalits to reject Hinduism all together; converting himself, along with lakhs of dalits, to Buddhism. Having highlighted these differences, Prakash Ambedkar then made an important observation about the two leaders’ relationship with each other. “Both Ambedkar and Gandhi were not in agreement with each other. They were in very different places; but they never let the difference stop the conversation between their ideas.” It was this dialogue that has enabled us today to observe, understand, analyse, and fight forms of oppressions.

Rajmohan Gandhi, in his turn, also talked about the debates and differences of opinions between Ambedkar and Gandhi, but also mentioned the things that they agreed on. He said, “Freedom of speech, freedom to believe, freedom to be an atheist, to believe in non-violence; these were certain things that both of them would not compromise.” Reflecting on the increase in violence today in the country, Rajmohan Gandhi pointed out that Ambedkar always spoke about asserting oneself through struggle, debate, and fighting, and not through the “…use of lathis and guns, but through nonviolent modes.”

Applauding the success of Samas in bringing together people with different ideas and opinions under one roof, he said, “Wherever the spirits of Gandhi and Ambedkar are, they must be celebrating today.” He added that such events, which bring together people with diverse ideas, are very crucial, especially in the current political scenario where people are being attacked and killed for differing views.

Samas, by having  both Ambedkarite and Gandhian figures addressing the gathering from the same platform,  succeeded in reminding us of India’s rich history of respecting differences in opinions and ideas, the legacy of nurturing the diversity in our country..

Dakshinayan Abhiyan was founded by Ganesh Devy, a linguist scholar and an activist, in the wake of the killings of rationalist Narendra Dabholkar, activist Govind Pansare, and scholar M M Kalburgi. All three of them, through their scholarship and activism, opposed the communal and sectarian politics of Bharatiya Janata Party (BJP), and its think tanks, the Rashtriya Swayamsevak Sangh (RSS) and the Sangh Parivar.

Dabholkar, Pansare, and Kalburgi’s deaths was strongly condemned by writers, activists, scholars, and artists, who joined together to resist these attacks on the freedom of speech and expression. Gauri Lankesh, an activist-journalist in Karnataka— she was actively involved in supporting and mobilising the protests against these political murders, and the failure of the police in nabbing the perpetrators in the three cases — was also assassinated on 5 September 2017. Gauri’s murder added to the sense of urgency among citizens, who saw these killings as a threat to democracy and the constitutionally guaranteed fundamental rights. Protesting the killings, there were a number of protest marches and events that were organised across the country.

These political murders are not merely the killings of people who dared to oppose and question the ideology of the ruling government. They are also an attack on the constitutional values, secular ideology, and the democratic fabric of this country that Dabholkar, Pansare, Kalburgi and Gauri represented and strove to protect. They nurtured the democratic belief system which stood directly in opposition to that of the Sangh Parivar. They believed, not in preaching a uniform principle, but struggled to provoke and enable the oppressed to think and question. And it is this, the ability to think, to question, and dissent, that is perceived as a threat by the fundamentalist right wing advocates.

Samas, in bringing the Ambedkarite and Gandhian politics in dialogue with each other, has given birth to a space for a dialogue at a time when such spaces are becoming increasingly more scarce, making it all the more significant. The question that we should be asking now is, do we have more such spaces?