Rally for Gauri Lankesh and Rohith Vemula Held in Canada 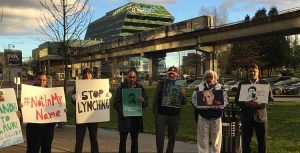 The South Asian activists gathered at Holland Park in Surrey on Sunday evening to remember Gauri Lankesh and Rohith Vemula, the two prominent victims of the right wing extremists.

Organized by the Indians Abroad for Pluralist India (IAPI), the rally was held to mark the birth anniversaries of the two individuals who stood up against the violence of Hindutva forces.

Lankesh was born on January 29, while Vemula’s birthday falls on January 30. While Lankesh, a journalist was gunned down in September 2017, Vemula – a University Researcher was forced to commit suicide after being bullied by the right wing goons for raising voice against oppression in January 2016.

Incidentally, this past January 30 was the 70th death anniversary of Mahatma Gandhi who was assassinated by the Hindutva extremists in 1948. Apart from Lankesh and Vemula, Gandhi was also remembered on the occasion.

The participants carried placards with pictures of Lankesh and Vemula, besides other victims of Hindutva terrorism. Slogans against RSS and BJP were also raised by those in attendance.

The speakers at the demonstration unanimously condemned the growing attacks on religious minorities and the political dissidents under the Modi government. The rally was started with a poem dedicated to Lankesh by Amrit Diwana – who acknowledged that her voice was silenced for questioning the power and speaking out against superstition and religious intolerance.

Raghu – a documentary filmmaker and an activist from Bengaluru who personally knew Lankesh told the gathering that she was a brave woman who never compromised on her principles despite serious threat to her life.

The members of Ambedkar International Social Reform Organization participated in big number. Their leaders Rashpal Singh Bhardawaj, Amarjit Singh Leahl and Rattan Paul noted that under a government run by the BJP that believes in Manusmriti, violence against Dalits has rather grown at an alarming rate.

Others who spoke on the occasion included Barjinder Singh of Sikh Nation and Gian Singh Gill, the spokesman of Gurdwara Dashmesh Darbar. Both pointed out that the growth of the Hindutva forces is the direct result of the majoritarian politics played by the previous Congress government under the garb of secularism. They stated that the anti-Sikh pogrom of 1984 was nothing but the manifestation of Hindutva politics.

Imtiaz Popat, a Muslim activist of Gujarati origin also spoke at the event. He reminded the gathering of the 2002 anti-Muslim massacre engineered by the Modi government in Gujarat and tried to make a connection between the past events with the ongoing attacks on minorities in India.

Dionne Bunsha, a journalist and an author who covered Gujarat massacre also spoke at the rally. Marxist activist Hardev Singh called upon everyone to set aside ideological differences and work together to unseat the BJP government from power in India.