old post
BJP-PDP Divided over FIR against Army, Lust for Power will Keep Them Together: Yousuf Tarigami
February 2, 2018 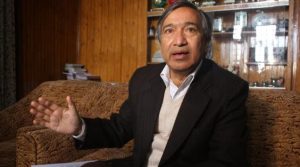 The Kashmir Valley is tense again after three civilians died in army firing in Shopian district on 27 January. This happened three days after an encounter between the army and militants in the same area, which left a civilian and two militants dead. While the Valley has been in mourning for the four young Kashmiri men, the BJP-PDP government has been spatting over legal action against the Army. Although chief minister Mehbooba Mufti said the investigations against the army would be taken to their “logical conclusion”, the BJP has been vehemently opposing the registration of an FIR against the Army.

Newsclick spoke to Mohammed Yousuf Tarigami, CPI(M) MLA from Kulgam, on the divide between the ruling parties, and if any meaningful results can be expected from the magisterial probe.

What is the situation in Kashmir after the Shopian killings?

Two civilians were killed at Ganowpora village in Shopian on 27 January. Yesterday (31 January) morning, one more succumbed and the number has now risen to three.

This has once again plunged virtually the whole valley into deep mourning. Recurrent killings of unarmed and young persons, and in circumstances which otherwise cannot be considered provocative, has created a deep sense of alienation in the Valley.

What happened in Ganowpora is not a stray incident, of course. People of Kashmir have been witnessing such incidents time and again. Even now the government claims there is improvement in the situation, and it is thinking of holding Panchayat elections.

But even in ordinary law and order situations, what is the necessity of deploying the armed forces? This was the question I raised two days before. The question here is, unfortunately, our fellow countrymen are misled and given distorted information about whatever is happening in Kashmir.

Kashmir is being addressed by the government of India, particularly by the Modi government. They either don’t have any concrete policy, or if there is any policy in place, it is exclusively aligned with more and more force.

What the CPI(M) believes is that this is essentially, fundamentally a situation of political unrest. It needs to be, should be, should have been addressed by a political process. But instead of initiating such measures, what the Indian government is doing is only relying on security forces, and that too quite disproportionately to the requirements on the ground.

Now if you ask a common man in Kashmir, in Shopian or anywhere else, north or south or centre, you can see that people feel insecure and deeply hurt. Cutting across the political lines.

It is true that there might be a certain number of incidents by militants as well, no doubt about that. Nevertheless, we have been insisting that extremism and extremist elements need to be isolated, and you cannot isolate them by adding fuel to the fire.

That’s why we suggested that a genuine political process be started, a dialogue process be started. This should involve all the stakeholders in the state, certainly that is a prerequisite. But in the recent past, there has been cross-shelling on the LoC, there has been devastation. There has been too much of loss for the peasants who are living along the LoC and the border. This is a serious situation that warrants some sort of a serious initiative from the government of India.

You said that citizens of India outside Kashmir are misled and given distorted information. The mainstream media only gives out statements made by the Army, which vary greatly from what the local residents and eyewitnesses say. What should be the narrative for the citizens outside India?

The Army is an institution. The CPI(M) is not in any way, in any form, saying anything that goes against the interest of the country. The Army as an institution has to defend the borders, the LoC.

But, we have been time and again emphasising that enough is enough. Don’t use the Army in every situation, don’t overburden the Army. They have mandates to make the borders secure, which they are doing and must be encouraged to do. But certainly as far as internal security is concerned, there are sufficient forces available now. We have J&K police, paramilitary forces.

And finally, we must not make a mistake, it is my appeal to the people of the country, it is not a law and order situation. This is not a situation that can be addressed from the use of force anymore.

This is a question of massive disillusionment that the people are confronted with, that needs to be addressed, that cannot be done through the lathi or anything like that. It can only be done when you initiate certain confidence-building measures by revoking the AFSPA, recalling all those forces from the internal civilian areas where they are not required.

You need to have compassion for the people of Kashmir. You have to give them a sense of belonging. Wherever they are studying or going for business in whole of the country, they need protection. So there are many other measures that need to be taken. Finally, for a solution, you have to talk to all the stakeholders, here in the state, and between India and Pakistan as well.

What do you think will come of the FIR lodged against the Army?

I don’t know. We raised the question on the floor of the House, I had moved the adjournment motion, along with the National Conference. I had mentioned in my adjournment motion that there are two issues: Shopian killings and cross-shelling on LoC and border. That was accepted, there was a debate, the CM said we have registered an FIR. And it has been mentioned elsewhere that the FIR has been registered against the name of an Army major.

But then, the same evening, the DGP on TV mentioned that there was no registration by name against any armed personnel. We have BJP and PDP running in coalition, and BJP leaders has been entirely opposing the FIR against the Army, claiming it is unwarranted. We are in a very critical situation. On the one hand, one part is saying we have lodged an FIR, and the other part is demanding that there should be no FIR and there should be no investigation. This is the real problem we are facing today in the J&K.

Will this impact the BJP-PDP coalition?

This is an alliance that is not based on any common political agenda, but solely on sharing of power. I think that the interest in sharing of power is much bigger here, and that will prevail. They will ignore other things.

Can we expect the results of the magisterial probe to be unbiased considering the huge variations between the Army statements and eyewitness accounts by local residents?

Earlier, as we have seen, many unarmed people have been killed, FIRs have been launched, then finally there is some sort of a probe. Probes in a very big fashion have often been ordered. Finally, the result? People have lost faith as far as these probes are concerned.

Recently in the Rajya Sabha, there was a question asking for the cases registered, and the sanctions given by the government of India against the armed forces personnel, which have been suggested by the government of J&K. The answer is that there were 50 cases but there has been no sanction by the GoI.

This is the state of the probes that have taken place earlier. This is why people in general do not believe in probes and do not trust that anything is going to change. This is mere eyewash as far as people perceive it.