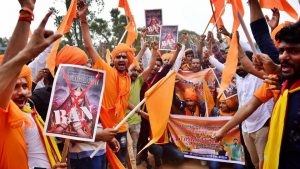 A bench headed by the Chief Justice of India Dipak Misra today dismissed a petition seeking the deletion of some of the scenes of controversial film Padmaavat which was released on January 25 by noting that censor board has already granted certificate and refused to go into the issue again. The petition was filed by Advocate ML Sharma.

“We had ordered deletion of some paragraphs from your pleading and that does not affect the movie which has now been cleared by the CBFC in its present form”, a bench of Chief Justice Dipak Misra and Justices D Y Chandrachud and A M Khanwilkar told petitioner Advocate ML Sharma.

Sharma argued that certain paragraphs had been removed by the court vide its order on 20th  November 2017 and therefore questioned how it could be used in the final version of the film. Referring to the order, Sharma told the court that while striking off the six paragraphs from his petition, the court had said that they “should not be used otherwise.”

The petition was dismissed by the bench and the Chief Justice Misra told Advocate Sharma that it was time for him to leave this cause as two petitions had already been filed by him in this regard and this current petition was his third.

Two earlier petitions- seeking criminal prosecution of the film’s crew and ban on release in UK- also were dismissed by the bench led by CJI Misra.

The petitions that were expected to be listed before the bench regarding the Padmaavat issue, were the petitions seeking initiation of contempt proceedings against the state governments of Gujarat, Rajasthan, MP and Haryana for not taking steps to ensure law and order before the release of  controversial movie Padmaavat and not providing enough security to the theatres. The petitions were filed by Advocate Vineet Dhanda and Tehseen Poonawalla. The Supreme Court on Thursday (January 25th) had agreed to hear the petitions on Monday. They are likely to be listed before the bench for hearing sometime this week.

The three judge bench headed by the CJI on 23rd January had decided to neither modify nor change the order passed on January 18, 2018 staying a ban on the release of Padmaavat throughout India including the states of Madhya Pradesh, Haryana, Gujarat and Madhya Pradesh. The bench in its order passed on 23rd January, stated that the states cannot ban a movie and were constitutionally obliged to maintain law and order and prevent untoward incidents. The movie was finally released on 25th January.

The order passed by the Supreme Court had been seen as a win for the freedom of speech and expression. With the climate of gag orders being passed by several courts such as Allahabad high court gag order in the matter concerning Yogi Adityanath involvement in Gorakhpur riots and the CBI judge gag order in Sohrabuddin Sheikh case, among others, dismissal of the appeal of states for banning the film Padmavat has been appreciated as a positive step of upholding the freedom of speech by the Apex Court.