old post
70 Years: Gandhi’s Secularism Refuses to Let Him be Reduced to a Pair of Spectacles
January 30, 2018 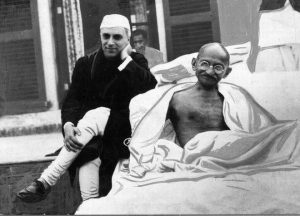 In the sustained communal offensive against the secular character of the Indian Constitution, the term "secular" is in serious danger of becoming a casualty.

This is largely because the notion of "secularism", itself a modern concept which cannot be delinked from democratic principles and rights of citizenship, has often in this communal ideological onslaught been equated with a worldview that has no place for religion, or a state of being irreligious. Such a misrepresentation, essentially malicious, has encouraged a tendency to equate secularism with immorality in an attempt to render it unpalatable at the popular level.

For instance, the present Governor of Tripura who holds an important constitutional position is reported to have stated, some time back, that "I am not secular, I am a Hindu". He then went on to say that the word "secular" according to him means "bereft of religion". Going through the text of the interview one can see that what he implied was that he does not believe in the ideals of secularism because that would not allow him to engage in the politics of religion, and the politics of religious identity.

Gandhi would have immediately pointed out the problem with such an understanding: being secular does not mean being "bereft of religion" or being irreligious. At the same time being secular implies not using religion for political purposes.

Communalism involves the use of religion and religious symbols to promote hate. In many ways, Gandhi’s understanding and practice of secularism was the product of his being deeply spiritual and religious. For him, spirituality meant striving to be compassionate and a better human being, rather than using religion for political purposes.

Gandhi’s religiosity prevented him from cynically mixing politics with religion, even though he affirmed that his politics was imbued with his own personal religious ideals.

At a time when the meaning of secularism is being distorted for communal purposes we need to strengthen the legacy of secularism inherited from our national movement, the dominant trend in a struggle that was overwhelmingly secular which in turn, was a major achievement of Gandhi. This was a trend that survived the terrible communal violence which accompanied Independence and partition, though its collapse at that critical moment due to factors that are complex, is very obvious.

In the two-volume Shorter Oxford English Dictionary three lengthy columns are devoted to the various definitions of "secular", "secularism", etc. Almost all shades of meaning define "secular" in terms of the separation of religious matters from worldly affairs: "secular—belonging to the world and its affairs as distinguished from the Church and religion"; "secularism—(i) the view that religion and religious considerations should be deliberately omitted from temporal affairs, (ii) the view that education, especially that which is publicly funded, should not promote religious belief or include religious instruction".

Most of these meanings derive from the long struggle in early modern Europe to separate the state from the Church, and to keep religion in the private domain.

Secular nationalism in India modified this understanding creatively. Gandhi contributed in no small measure to articulating this modified understanding.

In the words of Mukul Kesavan (Secular Common Sense), "Indians are sometimes scolded for misunderstanding secularism. They are reminded that secular, in its original, western sense, means a commitment to public life fenced off from religion—not an equal pandering to all religions”. According to Kesavan “Indian secularism grew out of the peculiar circumstances of anti-colonial nationalism”.

“The uniqueness of Congress’s nationalism”, he writes, “is its near-complete freedom from mystical and mystifying notions of blood, soil or national essence which are the stock-in-trade of narrower patriotisms. The Congress … replaced these with colonial exploitation and economic subjection.”

Gandhi’s secularism was shaped by his eclecticism, an eclecticism that has not received the appreciation it deserves. During the crucial formative years of his early youth spent in England, and his long residence in South Africa, Gandhi was exposed to and imbibed unorthodox ideas which played an important role in his intellectual evolution.

Many of these came to him through his engagement with vegetarianism. For Gandhi vegetarianism was not a fad, nor was it part of a divisive political agenda, nor was it a dietary preference which he might seek to impose on others through intimidation. Over the years it became integral to his spiritual quest as an individual. His vegetarianism was defined in terms of abstinence and control over the senses. Through his vegetarianism Gandhiji sought to discipline himself rather than police the kitchens of others.

As Kathryn Tidrick in her very fine study of Gandhiji (Gandhi: A Political and Spiritual Life) observes, control of the palate was for him "part of a religious effort to transcend his material nature".

Tidrick has drawn attention to the impact which ideas propounded by religio us thinkers associated with Esoteric Christianity had on Gandhiji while he was in South Africa. Suffice it to say here that this represented a tendency based on an unorthodox interpretation of Christianity. According to Tidrick, "Gandhi’s secretary, Pyarelal, who knew him intimately, told the Gandhi scholar James Hunt in 1978 that Esoteric Christianity had a “specific and lasting influence” on Gandhi’s thought, and “gave a very distinct colouring to his thoughts on some very vital aspects e.g. Brahmacharya” …

Pyarelal added that “Whatever [he] absorbed in this extremely impressionable formative phase of his development abode with him for life”’.

One might mention that some of those associated with Esoteric Christianity in South Africa, and England, were strongly committed to vegetarianism (‘control of the palate’) and Gandhi’s contacts in these often overlapping circles prepared the ground for his engagement with Tolstoy and Ruskin, making him receptive to their powerful ideas.

In other words, Gandhi’s was a highly intellectual eclecticism, complex and broad-minded.

Today when in India narrow-minded opponents of secularism, utterly lacking in compassion and so fond of the good things of life in a vulgar material sense, trivialize him by representing him through the symbol of a pair of spectacles, they mock a great man for whose broadmindedness they have absolutely no respect.