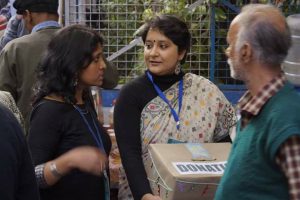 Kasturi Basu, one of the organisers of the 5th Kolkata People’s Film Festival, waits outside the entrance to Jogesh Mime Academy auditorium with a donation box as the crowd from the last session comes out. She says, “Please donate for the People’s Film Festival; we run on your donations”. After some time, documentary filmmaker Nakul Singh Sawhney joins in with “Please donate”. An old gentleman responds in Bangla, “Ami dieche”  (I have donated), and then goes on to explain the details, to which Sawhney — not a Bengali speaker — looks flustered, but soon replies, “I have understood what you have said.”  Everyone has a laugh. This is a small snippet from the second day of the festival, after the screening of Lalit Vachani’s film The Men in the Tree.

The Kolkata People’s Film Festival began in 2013, and, since then, has grown to create a space for a much needed culture around cinema. The festival takes place at Jogesh Mime Academy, a proscenium stage built after Jogesh Datta, the most renowned mime artist from Bengali theatre.

But what do the people involved in organising a people’s film festival have to say? On the third day of the festival, I spoke to Dwaipayan Banerjee, one of the founders of the People’s Film Collective, which organises the festival. 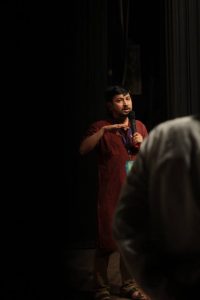 My first question: what is the purpose behind the festival? “We had decided two things: first, we won’t take a penny from any corporate house; second we will screen films which have to fulfil two criterias: it has to be cinema; it has to speak of issues that concern us.”

But the festival was not the first project that the People’s Film Collective started with. “Our first screening was in a closed mill in Naihati. We screened films which would be relevant to the setting, for example Anand Patwardan’s Occupation Mill Worker.” Indeed, People’s Film Collective has made a concerted effort to take their screenings away from the city and into other places in Bengal.

Hosting the festival in the city, however, also means that it sets itself apart from the films churned out of Tollywood, which, after a few decades, managed to attract urban audiences. Banerjee feels that the improved audience of the urban cinema goer interests him, but “… it’s not an interesting place to be in,” he says. Why? He refers to an article by Pujita published in their journal on cinema. “These films by Shiboprosad Mukherjee and Srijit Mukherji cannibalise the Bengali bhadralok icons and use them for purposes that are completely at loggerheads with what they were meant to be used for. It’s not that I like Bengali art-house cinema a lot: it was bhadralok, had its heyday, and is now over. But now, Ritwik Ghatak and Satyajit Ray are rehashed in a way that could have never been imagined or intended.”

The Kolkata People’s Film Festival, in fact, screens very few films in Bengali. I asked if I was right in concluding that the festival is more interested in showing films from across India. “Whenever we screen good feature films, we get a lot of good material from Maharashtra, Punjab, Assam, and even Tamil Nadu. But from Bengal, there is a dearth of both good feature films and documentaries. Goutam Ghosh and Utpalendu Chakraborty had made two documentaries when Patwardan first began his movement. Unfortunately, it has died down. With this festival, we hope more people will get interested in the form of the documentary.” 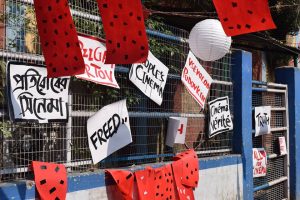 Indeed, on the second day of the festival, when we had this conversation, most of the films were from Assam, Manipur, and Meghalaya. They included Tarun Bhartiya’s La Mana (Not Allowed, 2018) and Rongili Biswas’ A Song for Everyone (2017), Oinam Doren’s Theare of the Earth (2017), and Mitali Biswas’ Hei Samaloi (2018).

The People’s Film Collective has not just maintained their collective efforts for the last five years, but has also tried to democratise the process of curating films. Banerjee said, “We are a two tier organisation. We have a Working Group and the General Body. The former consists of members who can devote more time to the organisation. We don’t have strict membership rules; we don’t have elections, for instance. It just depends on who can give more time. The Working Group sees all the films over a week, and that is when we see all the films together.”

From the way the festival is organised, it is certain that they take their jobs very seriously. “We don’t make any money, but we are very professional. Whenever you talk of left cultural festivals, they are organised very shoddily. It’s considered okay if films don’t start on time. We we were opposed to such an attitude. We were organised from the first edition of the festival itself.”

Indeed, the 5th People’s Film Festival was a place for debates, arguments, and genuine admiration for films screened. At the end of Teena Kaur Pasricha’s film 1984, When the Sun Didn’t Rise, for instance, the audience stood up to maintain a two minute silence for those who lost their lives in 1984 Sikh riots. Pasricha was visibly moved by the gesture. A member of the audience stood up to make an important observation about a character in the film who is addicted to drugs. “I think that the drug menace in Punjab is a way to prevent the youth from organising against the atrocities which have been committed on the Sikhs: from Operation Bluestar to the Sikh riots.”

On other occasions, the mood was lighter. After the screening of the film Turup (2017),  for instance, the audience was thrilled to know that one of the actors in the film is a Bengali who now lives in Bhopal: “Khoob bhalo hoyeche”, they said to the actor from Uluberia. 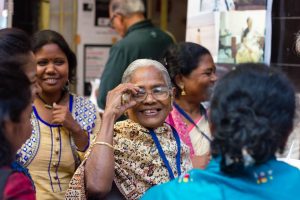 Turup, (which was filmed by the Bhopal-based Ektara Collective and which would have probably swept up all the awards if a festival such as this had a competition section) was also the penultimate film to be screened on the fourth day of the festival. After the last screening, I sat down once again with Banerjee and Kasturi Basu. The latter was the co-director of the much-anticipated film S.D., which had premiered a few hours ago. Our interview was constantly interjected with sounds of the projector screen being taken down. “How do you feel, now that the projector is being dismounted?” I asked both of them. “We have a series of weekly screenings coming up. We also have to organise for the next study circle. We can’t rest for more than two days. We have to start preparing,” Banerjee said. They were both beaming, their smiles wide.