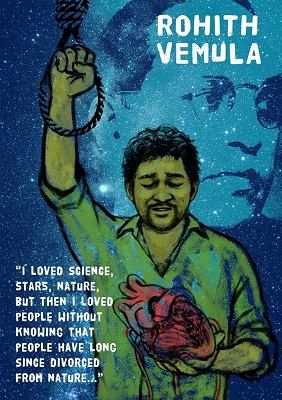 Urging the government to enact the "Rohith Act" and ensure scholarship for all students from marginalized sections, academic fraternity and social activists across the country stood together in memory of Rohith Vemula. The existing system which is based on caste-based structural inequality had pushed Rohith, a Dalit research scholar at the University of Hyderabad, to death on January 17, 2016.

On Wednesday, on the second death anniversary of Rohith, students took out a silent rally in the University of Hyderabad campus, where he committed suicide. Rohith's mother Radhika Vemula, Ambedkar's grandson Prakash Ambedkar, and activist Kancha Ilaiah Sheperd led the rally.

In Delhi University, progressive students and teacher bodies including SFI, AISA, DTF, CTF among others, held a public meeting ‘in defence of social justice’.

While addressing the gathering, N. Sachin, a faculty from Dyal Singh College, recollected the struggle of Rohith Vemula and said: “When we celebrate the legacy of Rohith Vemula, we are saluting the kind of confidence, hope and conviction that we need to essentially have when we are there in the part of political struggle.”

Calling for the implementation of Rohith Act, one of the speakers, Ratan Lal, a faculty from Hindu College talked about the shrinking democratic spaces in our universities.  The university spaces which are meant to discuss different ideologies are turning into commercial spaces, Ratan Lal observed.

One of the long-term demands of students, that the implementation of “Rohith Act”, reverberated at this time too. Rohith Act which can safeguard the students from marginalised sections in Indian Universities was one of the main demands of students after the death of Rohith Vemula. While the BJP-led Centre has not made any step to implement the act so far.