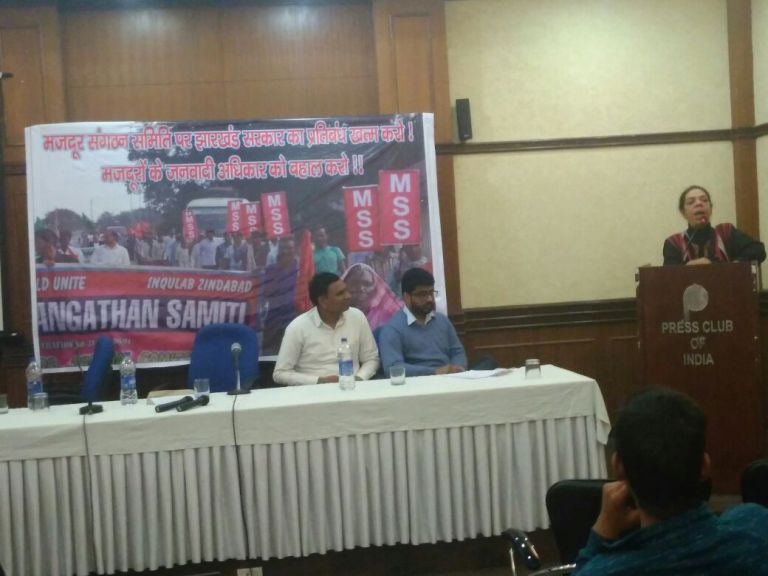 We the undersigned, condemn (i) the illegal, unconstitutional and arbitrary ban under Section 16 of the draconian Indian Criminal Law Amendment Act, 1908 (CLAA)on Majdoor Sangathan Samiti (MSS), a 30 year old registered Trade Union, and (ii) the false cases impugned under Section 17 of CLAA against 10 office bearers of the MSS, by the Jharkhand government.The ban and FIR have been imposed/charged on the grounds that the organization invited Vara Vara Rao, a renowned Telgu poet, to a meeting celebrating 100 years of the Great Russian Revolution.

MSS was founded in 1985 by Advocate Satya Naryana Bhattacharya and now has 22,000 members. Registered in the year 1989, and its registration number is 3113/89, since then it has been engaged in organizing workers in various industries in the state of Jharkhand, especially Giridhi, Bhokaro and Dhanbad. The organization is working amongst the coal mine workers, thermal power plant workers, unorganized workers (DoliMazdoor, who they have been organising since 1995) of Shikharji (Jain pilgrimage site), agriculture workers, and fighting for the realization of the legitimate demands of these workers. The organization has also constructed a hospital at Madhuban, Giridhi for free medical assistance of poor and the workers. The organization publishes a monthly newspaper, named ‘MajdoorkaAhawaan’.It has,in the past throughseminars and peaceful rallies struggled for the realizations of workers’ rights and it should be noted that there have been no cases of inciting violence or disruption against the organization in all these 30 years.

The ongoing mobilization and organization of doliwallahs of Shikharji, coal miners, movement against the privatization of state industries, against the displacement of Adivasis in the name of development,and the demand for judicial inquiry in murder of Motilalhas irked the State against  MSS. Most importantly, the organisation has been banned on irrelevant grounds for inviting revolutionary poet VarVarRao and there are no cases against him in the court of law. It is not against the law for an organisation to invite a speaker for an event who happens to be a renowned poet. Additionally, the charges against the members of the MSS have been levied for apparently illegally collecting funds. It should be noted that it is not in contravention of any law of the land for a registered trade union to collect funds and subscription money for their legally registered organisation.

The ban is completely illegal as it is against the principles of natural justice since no opportunity to be heard was given to the organization before the imposition of the ban. Moreover, the registration of a registered trade union under law can only be cancelled by the Registrar, Trade Unions, with prior notice of not less than 2 months. The imposition of the ban is a violation of the constitutionally guaranteed right to form association,which is an essential feature of the fundamental right for freedom of speech and expression, enshrined under Article 19 of the Constitution of India.

This press conference is addressed different trade union leaders, human right organisations and its representatives. Aparna, National President, IFTU, condemned the ban being illegal, unconstitutional and arbitrary and said, “MSS is a regular registered trade union . MSS and IFTU was leading the process is in forming united front of coal workers in Jharkhand, and an international conference  of coal mining workers  was conducted  in January, 2017. The trend of banning trade union is very dangerous trend. This ban is a big onslaught on trade union movement and its constitutionally guaranteed right to form association. The Collection of funds & donation, celebrating Russian revolution, printing literature being ground of ban are pure flimsy without any legal grounding.” Ashok Choudhary, New Trade Union Initiative (NTUI), that the ban should be seen in the context of ongoing onslaught on Adivasis in the name of development, he said “ Worker organisation has always been conflicts with corporates. All  have right to organise, it is the first time in the history that a registered trade union has been banned under draconian and colonial Criminal Amendment Act, 1908. This act of surpassing the Constitution of India and Trade Unions Act, reflects intention of Indian state to crush all democratic struggles. We should launch a nationwide resistance movement against the ban and should stand in solidarity with MSS.”

Given this arbitrary ban and impugning of false cases against the members of MSS, under flimsy grounds, without any justification:

(i) We demand the revocation/withdrawal of the illegal ban imposed on the MajdoorSangathanSamiti; and

(ii) On 23 Dec in Madhuban, Girdih three committee members of MASS branch in Madhuban were arrested – Ajay Hembrum, Mohan Murmu and Daya Chand Hembrum. FIR no. 28/17 , under sections 17CLA act, 13 UAC and others charges [as reported in media]. We demand the withdrawal of the false cases against all the office bearers of MajdoorSangathanSamiti.

We call upon all democratic and progressive organisation to mobilize and resist this fascist attack on the MajdoorSangathanSamiti and oppose the charges under   the draconian Indian Criminal Law Amendment Act, 1908.

Released and Signed by: