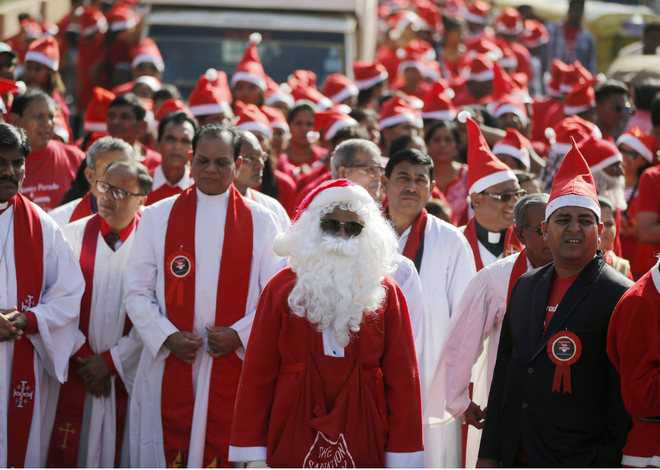 Throughout the West, in both the Americas, Europe and Australia and in parts in other countries in Asia and Africa, there is no festival to beat Christmas; the shopping, the sales, the gifts exchanged, the family dinner with the father or grandfather carving the turkey (apologies to vegetarians), Santa Claus, Christmas trees in every house — December is a gala month.

There is bonhomie all around and of course quite a lot of drinking. And don’t forget the carols, they are sung so beautifully and with such fervour, it was bliss to hear them. The tolling from the belfries was also music to the ears. I used to wander around the big churches in London just to hear the carols sung on Christmas Eve. “We Adore Thee” and “Good King Wenceslas “, as also “Silent Night, Holy Night” were favourites.

As a Zoroastrian, let me take you back to John Milton:

“See how far from on the Eastern road

The three Magi were of course Zoroastrians who were led by the star, possibly Halley’s Comet which had appeared at that time. It is a great story, fable of course, but the word “fabulous” stems from “fable”, doesn’t it? All myth is fabulous whether it is Hanuman’s army making a bridge across the ocean or the River Ganga falling on the tresses of Shiva. Exult in myth, guys! And celebrate.

But what are we up to? Christmas has been in the Indian news for the wrong reasons since Hindutva came to power in 2014. First, the BJP government cancelled 25 December as a holiday. Their ideologues must have thought why must we celebrate the birth of some Palestinian (he was born in Bethlehem after all) 2014 years ago? Then a cabal, spearheaded they say by Mrs Smriti Irani and others, came up with the great idea of converting Christmas into Good Governance Day. Right wingers, that was spot on! Jesus never governed, but so what? They couldn’t find any other day in the calendar? Governance is not restricted to one day.

Today, there is an abhiyan against celebrating the birth of Jesus, and the singing of carols. The Hindu Jagran Manch, an affiliate of the RSS, has warned schools in Aligarh against celebrating Christmas. And if the students said Merry Christmas to each other, or exchanged gifts or sang, woe betide them, they would do it “at their own risk”. Some Sonu Savita, city president of the HJM, is said to have told reporters that a circular to this effect had been sent to all schools. The UP Police are reported to be taking action against this drive. But, when goons of the Yuva Vahini patronised by Chief Minister Adityanath Yogi himself raided a church in Lucknow, the police promised investigation against the church! Just as the Army is presented with colours ceremonially, I feel the police of India should be presented its colours (saffron) at a gala parade.

Worse happened in Satna district in Madha Pradesh. Students studying to become priests in a village 15 miles from Satna were assaulted by rightist ruffians. The police came and took the priests and over thirty students to the police station. The right-wing goons accompanied them. The Christians were assaulted and the car of the priest was set on fire. The police registered a case relating to conversion through inducement against the Christians under section 153 (B) and 295 (A). As far as the beating up of the carol singers and burning the priest’s car are concerned, a case was registered against unknown persons! What does one do against such police bigotry and high-handedness?

In most of these anti-conversion “Acts” passed by state legislatures, the person embracing another faith has to report to the police and appear before the District Magistrate. The same applies to the priest who intends to preside over the ceremony. Then a month or a fortnight has to go by. If the District Magistrate is too busy to meet you, what happens? It is Kafkaesque. These laws, which go against the grain and spirit of the Constitution, are a blessing to majoritarian vigilantes. The Universal Declaration of Human Rights proclaimed by the UN in 1948 gives every human being the freedom of thought, conscience and religion. It explicitly states that “this right includes freedom to change his religion or belief”.

The caste factor also needs to be taken into account. Many of the Christian converts came from lower castes. That could be a factor in police high-handedness.

I have a confession to make. I don’t hold with conversion in India. When the majority community does not convert, why should the others? But one can’t argue against the Constitution and the UN Declaration of Human Rights, can one? Such issues need national debates.

Airport administrations have better sense than the “Good Governance Day” types. One loved to see a Santa ride a big sledge drawn by five or seven reindeer at the Delhi airport. Children were getting themselves photographed against this spectacle. That’s what festivals are all about!

First published in The Tribune.

Keki Daruwalla writes poetry and fiction. He lives in Delhi. His novel Ancestral Affairs was recently published by Harper Collins. He won the Commonwealth Poetry Award (Asia) for his poetry volume Landscapes.
<