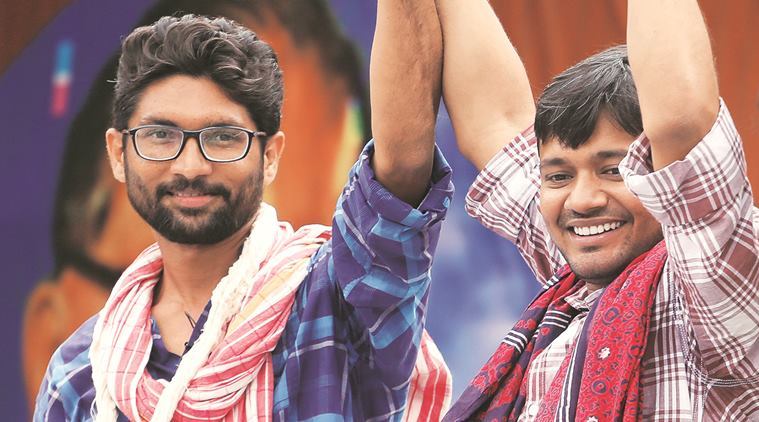 Jignesh Mevani does not believe in wasting time, and ever since the election results, he has been on a whirligig, meeting people, accepted congratulations but more importantly for him and Vadgam, focusing on real issues.

His first act was to write to the District Collector of his district to fix the road in the constituency. Unlike parts of Gujarat, his is an under-developed constituency with roads in parts being little more than mud tracks. Mevani followed the letter with a visit to the Collectors office, where he did not stand on ceremony, gave his representation in person, and ended the meeting with a handshake and a laugh that did not hide the fact from the gathered officials that this new MLA meant business. He would be seen in the headquarters regularly, with petitions, and perhaps even protests if these were not acted upon.

Interestingly, he had announced that he would be doing this even before the results. He said that he would take up the under-development of Vadgam with the local authorities win, or lose. He won.

Mevani has also announced a road show between Vadgam and Vadnagar, the home town of Prime Minister Narendra Modi. Significantly, Vadnagar that falls in the Unjha Assembly constituency has rejected the BJP and opted instead for Congress party’s Asha Patel who has won this seat with a big margin of 19,000 votes. Mevani’s 50 km road show, expected any day now, from Vadgam to Vadnagar has, quite unexpectedly, two non-BJP legislators at either end. Needless to say, he had announced this as well before the results were out as part of his development agenda for Vadgam.

Mevani was able to withstand and sail through a highly communal and divisive campaign against him with increasingly strident whispers accusing him of being anti-Hindu. One for instance, as recounted by a small group of clearly pro BJP voters in his constituency was, “he has said he would support his sister to marry a Kashmiri Muslim”. Yes, nodded the others, “he is against the Hindu dharma.” For the Muslims and dalits, a majority in this constituency, Mevani was little more than an independent candidate in the initial stages of the campaign, as he was not from the Congress they would have liked to vote for.

The picture changed when Congress president Rahul Gandhi made a quick visit to Vadgam to join Mevani in a public rally. This, after he had denied a sitting Congress MLA the seat, in favour of Mevani. Significant, as it is a clear indication that the new party president has a role in mind for Mevani in the new organisation he is trying to build. The Congress has lost all dalit leaders over the years, with Sushil Kumar Shinde — never really known for his political activism — being the only one along with a reluctant Meira Kumar. Mevani, on the other hand, is an unabashed campaigner for dalit and human rights, bold and courageous in the new style of politics for which Gujarat —strangely enough—has set the trend.

Mevani has built alliances with struggles and movements in other parts of the country, is a well recognised figure in all political circles, and does not mince words in his public speeches. He has led several rallies and marches in Gujarat over the past couple of years in particular, leading dalits in the villages to take an oath that they would not clean sewers, or work as manual scavengers, for the upper castes. He has emerged out of an intense and tough struggle, a battle he has fought unflinchingly despite the threats and the attacks. He was attacked during the election campaign in Vadgam as well.

He will be a major asset for Rahul Gandhi if the Congress does lead a campaign for social justice in the forthcoming elections in Karnataka, and later Rajasthan and other states.

Mevani has, however, retained his independence, taking a decision to contest these elections after some persuasion from fellow travellers. He is categorical that he will work with secular and progressive forces, but will not surrender his independence or compromise his struggle in any way. This election has elevated him to yet another level in his rather dramatic rise in politics, acquiring the clout now to sharpen the fight for social justice and equity. 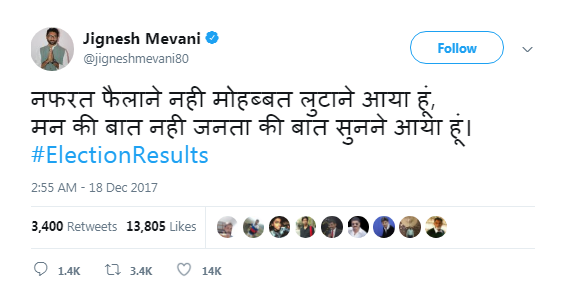 "Have come to return love, not hate; have come to listen to the people, and not make them listen to me"/ Image courtesy The Citizen