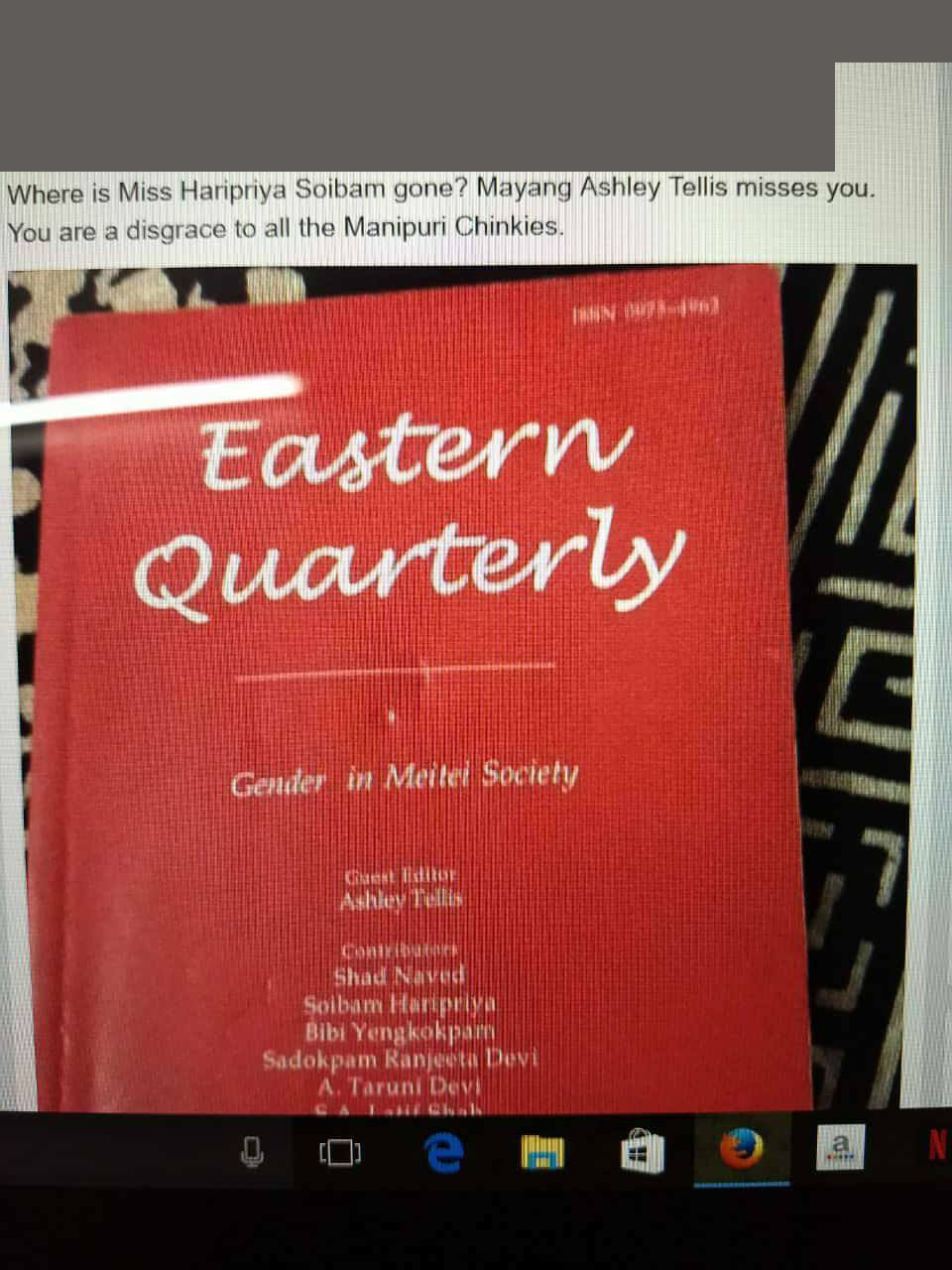 The projected image of empowered women, however, seems to be starkly different from the treatment they receive in their own families and communities. This is not to say that women are without power in personal and public lives. But frequent incidences of violence against women (though this is not the only prism through which one can look) and the response to them beg to tell a story different from the rhetoric of egalitarian Meitei civilization. The anxiety that has been raised by such incidents has always been starkly different depending on the affiliation of the individual/group. In the same manner consensual acts between adults is also coloured by the same concerns and anxiety to the extent of overriding individual’s right to privacy. This is stretched to the extent wherein there is no distinction in the language between words used for consensual sexual act and forced ones nor is there any distinction between treatment of either. While a word not existing in language does not necessarily mean condonation or a social sanction of the act it does point to a certain discomfort in dealing with it. Moreover the absence of words that signifies violence on women cannot be thought of as innocuous. By using this argument I am also trying to look into the preoccupation with the sexuality of Meitei women and critique the idea of motherhood.

Motherhood is used as a tool by the women’s movement and all women in the various women’s groups are referred to as “Ema” (mother) regardless of the age of the woman. Is the problematic sexuality of the women then managed by putting her in the mould of the archetypal mother? The paper attempts to posit the idea of motherhood separate from the celebratory overtones to imagine an alternative frame of organising and agitation wherein women come out of debilitating and constricting ways of imagining themselves and in which they are imagined. It is to be admitted that the paper suffers on account of using illustrations from only one community (Meitei) as a way of understanding the issue; a more nuanced analysis can only be arrived at by studying the other communities that make up the Manipuri society.

The Exemplar Protest and the Space of the Keithel

The situation in the aftermath of the nude protest on July 15, 2004 an agitation against the rape and killing of Thangjam Manorama on the intervening night of July 10–11, 2004 was highly charged, the government imposed indefinite curfew. The women who participated in the nude protest10 and those supporting the agitation that culminated to it were the keithel (market) women mostly from Khwairamband Keithel popularly known as Ema (mother) Keithel. Images of Nupi (woman) keithelslocated across the state cater to the romanticised notion of empowered Manipuri women, with the Ema keithel being seen as the exemplary of all such illustration. The Ema keithel was previously and more popularly known as Nupi keithel (women’s market), the change in the name to Ema keithel though difficult to trace does contribute to the archetypal image of mother nurturing and sustaining her offspring both through economic contribution to the household and also through the act of agitation and resistance, many of which ferment here.

One could however look at the keithel beyond the projected singular image and analyse the changing meaning of the space of the keithel. The Ema keithel is the space where some of the women who were a part of the nude protest and who are very visible in any type of street protest come from. The Ema keithel has become a highly urbanised space in its present state offering very little space to people of other ethnic communities as well as women of the Meitei community who are not from the capital (Imphal). Also the idea of a source of sustenance and nurturing of a mother is embedded in the name of the Emakeithel with women sourcing livelihood to care and nurture their offspring. It is from this space that the women who were a part of the nude protest had come out to agitate against the rape, torture, mutilation and killing of Thangjam Manorama with slogans of “Rape us, kill us, we are all Manorama’s mother” at the gate of the Kangla Fort where the Assam Rifles were stationed in the year 2004 where the incident happened. Women of the keithels as well as the Meira Paibis are seen as the archetypal mothers who are called upon to perform acts of sustenance, nurturing and resistance. It can be noted that it was the de-sexualised body of elderly women that could be seen disrobed as a sign of agitation and protest. It is the same de-sexualised body that can maintain midnight vigils in the streets at night. “Motherhood has often been used as a space for protest” argues Maithreyi Krishnaraj11 with no space for any articulation outside of conventional heterosexual motherhood. Using motherhood as the only space of protest is limiting. The status-quo is neither changed nor challenged. Krishnaraj in trying to look at the instrumental use of motherhood offers a brief outline of the formation of the Mother’s Front in Sri Lanka. The Front gave an ultimatum to the government saying “We want a climate where we can raise our sons to manhood, have our husbands with us and lead normal lives.”12 This emotive vocabulary of motherhood was more successful than the citizen’s appeal. It is no surprise that the day women in Imphal valley took up the meira is observed as Pari kanba (Rescuing of sons). This day also marks the transition from Nishabandhi to Meira Paibis. The effectivity of the appeal of the idea of motherhood should not surprise us. After all, one needs to engage with the patriarchal state in the same language.

However, the usage of the patriarchal language extends beyond the state, it is the language of our everyday. The usage of the mother archetype appeals both to our everyday and therefore the state too. The usage of this mother archetype is not a space but a limited enclosure. The idea seems not very different from Spivak’s analysis of Mahasweta Devi’s short story “The Breast Giver” (Mahasweta Devi’s “Stanandayini” translated by Spivak). The protagonist pointedly called Jashoda, the mythical mother of Krishna, is a professional mother who was a wet nurse to 30 children of her master’s household and 20 of her own. She dies alone consumed by breast cancer with none of the 50 odd children by her side. In her last days she sees her children in the doctor and the nurses tending her. The doctor remarked, “She sees her milk-sons all over the world.”13 For Spivak, the parable shows the “hegemonic cultural self-representation of India as a Goddess-mother (dissimulating the possibility that this mother is a slave) she will collapse under the burden of the immense expectation that such self-representation permits.”14 What would happen in a scenario where the women refused to be mothers – biological or otherwise – and begin to claim a space solely of their own? One need not look further into the consequence of such acts. In May 2011 there was an agitation of women from the Ema market asking for their space in the newly built (three) market complexes in the capital. When they fought for their space newspaper editorials as well as reports termed them as uncouth, vulgar and undignified. That at least points to the fictitious perception of the Ema market as an illustration of empowerment and also shows how layers of fiction of such women painted as empowered, respected and hailed as mothers can be easily peeled off. One newspaper editorial went to the extent of calling the keithel nupi as “noise some [sic] and foul.”15 The turn in language from calling keithel women as mothers to nupi –woman is interesting to notice. The same paper in another editorial referred to the women as “errant women who are set to derail accepted social norms” whom self-respecting married males would rather run away from.16 They are the same keithel women who had supported and were a part of the agitation that culminated in the nude protest. Therefore, there are these questions that can be raised. What is the prevalent perception of keithel women? How are they hailed as mothers of the whole society in one act of agitation and how they are completely stereotyped and misrepresented in another act of agitation? Thus the type of agitations that women can take up also needs to be informally ratified by the society or the community for it to be regarded as “acceptable.” Also the splintering in the keithel agitations shows the appropriation of various keithel-based organisations by the state with many such organisation choosing to remain silent as they have got their “seats” in the newly built market complex.17 Thus the agitation was not endorsed by the major keithel lups. Women certainly do not belong to a single community of women who regard their primary identity affiliation to it: class, clans, ethnic and spatial location remains more a primary identity that seems not to allow the consolidation of identities or sex or gender.

11     Maithreyi Krishnaraj (ed.), Motherhood in India: Glorification without Empower-ment, New Delhi: Routledge, 2010. Krishnaraj, however, represents the “nude pro-test” as supporting the insurgency movement whereas the protest was sparked by the rape and murder of Manorama Devi. “Likewise in Manipur (also in the north-east), women held a demonstration by marching nude as a protest against the actions of the Indian army which was suppressing insurgency in the area.” (Krishnaraj, 2010, pp. 24) The blatant factual error misrepresents the cause of the momentous protest which also shows that the north-east is indeed marginal in people’s imagination and erroneous representation abounds.
12     Ibid.
13     Gayatri Chakravorty Spivak, In Other Worlds: Essays in Cultural Politics, New York: Methuen, 1987, p. 240.
14     Ibid, p. 244.
15     Hueiyen Lanpao, “Unlicensed street vendors pick an unfair fight,” May 04, 2011. Other editorials and media reports too sided with the state. At least the media reception of the keithel agitation had brought to forefront the faulty perception and romanticisation of Ima keithel as an illustration of empowerment. Instead, these editorials and reports bring out to the core superficiality of understanding or rather misunderstanding the idea of empowerment. Most media have joined in the chorus with the state government crying itself hoarse that no number of keithels can placate the street vendors presenting the agitating women as if they all are an insatiable animal without giving a chance for the other voice to be heard.
16     Hueiyen Lanpao, “Unlicensed street vendors in an unlicensed screaming act,” May 09, 2011.
17     Imphal Free Press, “Ima Keithel: Withering Sense and Spirit,” May 14, 2011. This article developed from interviews with keithel imas at Lamphel and new keithels and facilitated by Human Rights Alert tried to bright to light the issues of poor gover-nance that was shielded. It was interesting to note the sense of moral and ideological bankruptcy creeping into the workings of various organizations, (in this case the keithel lups) and the effective appropriation of all such fragmented agitation by the state which is not to say that it is limited to the keithel lup or women’s organisations but however to point to the fact that women is not an undifferentiated mass.
18     The protest against the killing of Manorama where 12 Emas staged a nude protest in front of the western gate of Kangla where 17 Assam Rifles was then stationed, on July 15 afternoon of 2004.
19     Gayatri Chakravorty Spivak, In Other Worlds: Essays in Cultural Politics, 1987, p. 196.