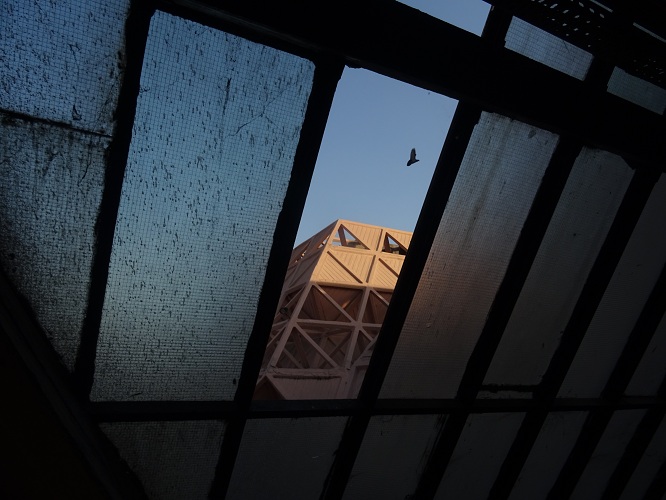 My lines speak of troubled destinies

With the rise of Hindutva, we may finally have slipped off the tightrope of linear time. In an earlier age, the post-independence modernist project promised a future free of the past. The nation believed it was moving ever forward, though tentatively, with each step preserving certain relics as heritage so that we might be sure the past was indeed safely behind. And for a time, perhaps, it was. But the destruction of Babri Masjid in 1992 marked the beginning of the undoing of these certainties; it inaugurated a world in which the future might be both ahead and behind, in which plastic surgery and aeroplanes existed originally in Vedic times. The allegation that the mosque was built on the ruins of a mythic Hindu temple created a template for a future that was simultaneously a return to a terrifying — or glorious — vision of the past.

A few months ago I heard Sarover Zaidi, an anthropologist of public space, suggest that the attempts to legally protect as “heritage” the Hall of Nations and Hall of Industries, the iconic modernist structures of New Delhi which were destroyed in April 2017, failed on account of a flaw in modernism. I’ve been wondering about how we can think of this flaw productively. Though theoretically committed to egalitarianism, the modernist socialist state from the very beginning acted upon the poor instead of genuinely extending citizenship to them. Maybe this was the flaw, I thought. Because it retained the old elites as the arbiters of the nation’s development and the keepers of its history, in a certain light modernism is perhaps not rightfully the heritage of a vast majority of Indians. If that is indeed the case, the courts may then have been correct in dismissing the defendant’s pleas.

But alongside this flaw in modernism I think, especially as it has been applied to the Pragati Maidan buildings, that there is another flaw, in the idea of heritage: it is no longer necessary in India. In the past, heritage was essential for progress, or pragati; it had to exist in order to orient us towards a future that it negatively indexed. In Walter Benjamin’s famous formulation: “The storm drives him irresistibly into the future, to which his back is turned, while the rubble-heap before him grows sky-high. That, which we call progress, is this storm.” We might add: that, which we called heritage, was this rubble-heap. Since then, after Benjamin, after Nehru, post liberalisation, progress is no longer seen to be necessary for development, and neither is heritage. So while certain myths remain, the storm propels us in more complex directions, in circles and figures of eight.

My thoughts keep returning to Mecca, a place I have never been to and can never go to, where only a few hundred metres from the Masjid al-Haraam and the Ka’aba, and on top of the ruins of an 18th-century Ottoman citadel, the Saudi government has built the third tallest building ever to exist, the Makkah Royal Clock Tower. Flanked on all sides by subsidiary structures, the clock tower looms over the Ka’aba. Its four clock faces are the biggest in the world, with 56-foot-long hour hands and 72-foot-long minute hands. By night, in the photographs I have seen, they are lit up and cast an eerie green pall. And it is not by mistake that it is a clock that adorns the building, above which sits a crescent moon and the inscription “Allah-hu-Akbar”, declaring, here at the most holy place, towards which the entire world turns, victory over time itself.

In India today, archaeology is the discipline that has been pressed most strongly into service in the regime’s conquest of time. After P.N. Oak’s mytho-historical theories that all mosques are built on temples, which in certain quarters have taken on the force of a prescription, archaeologists are everywhere unearthing temples under mosques. In 2003, eleven years after the destruction of Babri Masjid, the Archaeological Society of India officially “discovered” the remains of the Ram Mandir. (Fourteen years later, in January 2017, Dr Buddha Rashmi Mani, who led that dig, was appointed the director of the National Museum.) This is a strange temporality, where the legitimisation for the mosque’s destruction was found ex post facto, where the so-called archaeological evidence functions like a blueprint for the mandir which will no doubt eventually be built on the spot.

Each regime leaves traces, in administrative records, architecture, painting, and so on, which we may study in the vast archives of our times, but there are other more diaphanous traces within each of us. Modernism is not just a typology of stylistic details. Like all forms of power, it was also a principle for structuring time: the development-time of the nation-state, the long afternoons of its citizens. I have a belief, perhaps it is naive, and that, these traces of time, which live on as engrams, are activated in certain encounters and that we can learn from them something of the hidden structures of our own lives. The task, then, as the pendulum swings in new directions, is to turn outward to the world, toward such encounters with power’s surfaces, for they can teach us more than they intend.

I think back to my last visit to the Hall of Nations and the Hall of Industries, by which time they had already been emptied, and were inhabited only by the workers who would demolish them. The structures had assumed a sepulchral atmosphere, as if in preparation for their own destruction. Although the buildings were intended to host crowds of people, when they were empty the starkness of their form communicated with me directly: each new tetrahedral vista unfolded as a performance of some underlying structure and a declaration of faith in it, much like Nasreen Mohamedi’s radically matrixial line drawings, I thought, and I roamed around for an age following shadows and beams of light that splayed themselves across the concrete surfaces. The architecture, with its never-ending tessellations, had lulled me out of time. I realise now that, unlike Nasreen’s lines, marked by the frailty of her body, which was set upon by a degenerative disease that finally rendered even drawing impossible, these buildings were a reaching out into the eternal, a refutation of time and our experience of it, ahistorical from the moment of their conception; and though much was made of the advanced technologies used in their construction, I always felt that they might not have been built but instead grown from the earth according to inscrutable rules, like diamonds, which are configurations of carbon atoms in a particularly rigid lattice.

We may recall that all life is built on carbon. And also: we have been created in the image of god. This is where the state derives its power, one part of what the Nazi jurist Carl Schmitt referred to as political theology. By reassuring its subjects that it is natural and eternal, the secular state takes on an omnipotence that had earlier been the preserve of religion. Whilst each of us knows they will perish, like a diamond, our more perfect form, the state will endure, untroubled in its destiny. The buildings of Pragati Maidan, built for the 25th anniversary of the Indian nation-state, were in this sense a perfect piece of statist propaganda.

And now they’ve been destroyed, suddenly in the night, I wonder what new fantasy of eternity will be unearthed under these foundations? What new ways of being in time? As with Babri Masjid, from which we have now come full circle, as it were, we already knew: here, the news has informed us, they will find a state-of-the-art convention centre and a multi-level underground car park with parking spaces for 4,800 cars.

Our House of Love by Ananya Vajpeyi