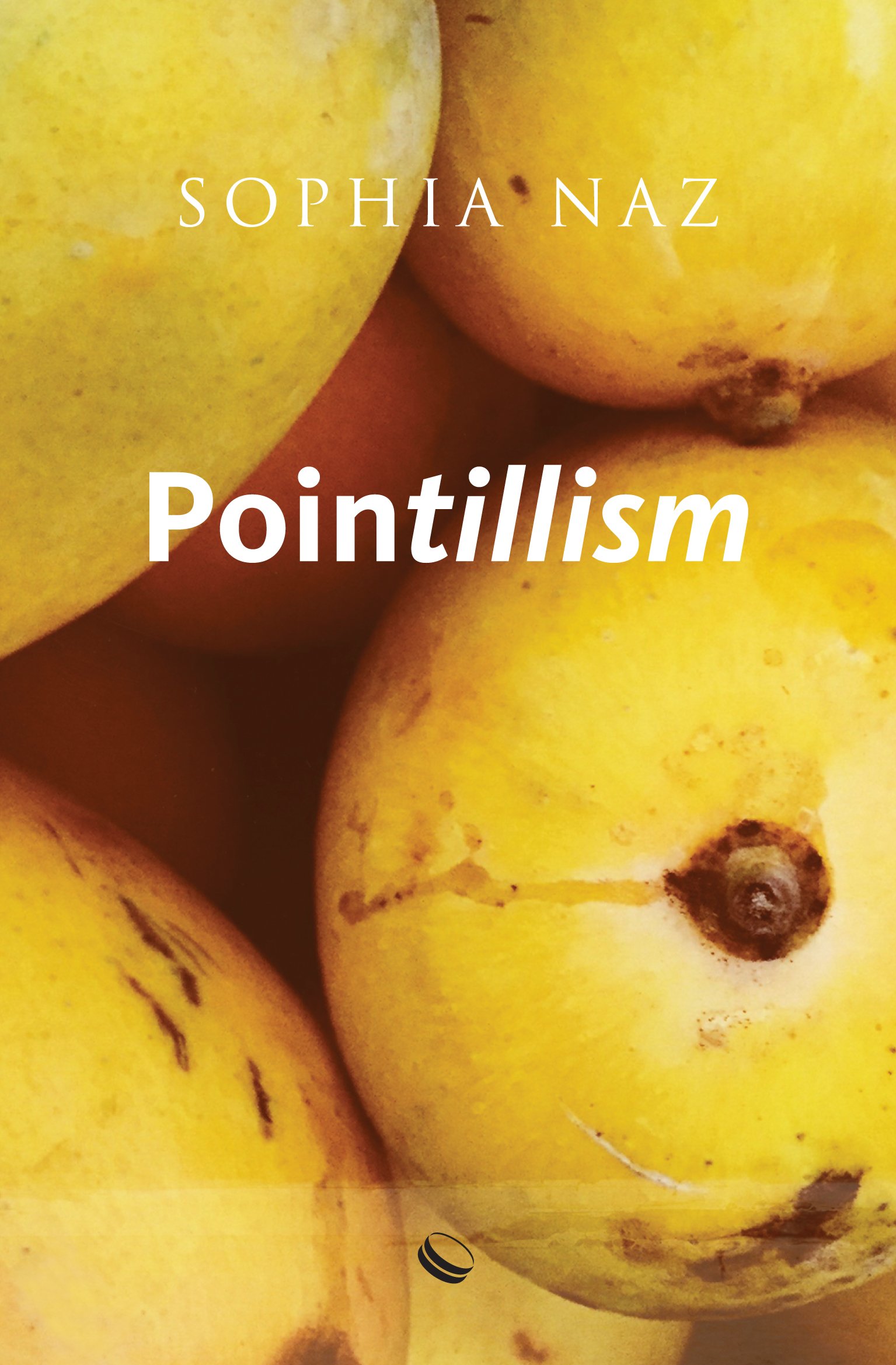 Sophia Naz is the author of three books, Pointillism, Peripheries and Date Palms. Nocturnes for Laila, a collaborative project, will soon be coming out. Naz is a 2016 Pushcart nominee and has been published in Poetry International, Adirondack Review, and several print anthologies. She is a South Asian-American living in Glen Ellen, USA. Pointillism has been published by Copper Coin.

The book asks startling questions on history, being, and asks the readers to see the world through a different lens. Letting her native Urdu and Hindi words flit through the English poetry, Naz firmly claims her inheritance as a song of lament plays throughout the collection. There are several images of the sea; there are also several references to ships and boats. In the book, Ramanujam, Pandora, Loch Ness’ play with djinns and cowboys, roam through birds pecking on banyan trees, and dandelions compete with the queen of flowers.

Be it a poem about the Bhopal disaster, like in The Taste of Cyanide, or her ode “The United States of Amnesia”, Naz’s mocking humour is always real and relevant. Consider the beginning of this poem:

Welcome to the United States of Amnesia
where the average attention span is
an albatross around the neck of history
drowning in largesse of half-caf mocha frappucino.

Images of birds fly through her poems. Be it the albatross in the poem above or her opening poem, “The Names of Birds” (“a koel calls/ the kalaf of her kaaf softened/ into humid syllable”), Naz’s rooms are cages and analogies to birds are freely sprinkled. She speaks of womanhood and gender in the stunning prose poem, “Pecking Order”:

The trees are forbidden. As is the cricket match on the street. As is running in the lawn. Because who will be watching. There is always someone watching. The world is made of eyes. You are made of cotton and pause. Day is made of fullstops. Nights are off the record.

“The Gulabi Guavas of Allahabad” is bittersweet nostalgia mixed with the tension of Indo-Pak politics as she writes of the “haste-covered border/ that marked you as other”, or the inherent violence in “the first time he flayed/ an Illahabadi amrood open/ offered you a wound pink cheek”.

Many poets are haunted by scars. Naz’s book, as it’s epigraph, has a quote by Leonard Cohen: “A scar is what happens when the word is made flesh.” One of my favourite scar poems, “For What Binds Us”, by Jane Hirshfield, says: “And when two people have loved each other/ see how it is like a/ scar between their bodies,/ stronger, darker, and proud”. Naz writes an “Ode to a Scar”:

yet there is
an undertow
in the welting

the warp
and weft that
knits

written on
the body

Naz has a peculiar ability to play with language in startling ways that make us ponder. In a poem on her birth, “Entry Wound”, Naz says “Marital and martial are anagrams. You were born visibly invisible, an ode to opposites.” Or this imagery conjuring “iodine ghosts. On a stream of betel juice and spit. Sanguis draconic. Your eyes were touchstones. They would change colour before you crawled. Both cat and woman.”

Pointillism raises many questions. Questions of birth, of gender, of the immigrant experience, of exile, of a father who lived through war, of a family who lived through a military regime in Pakistan. Her book has strong political statements as she speaks of “an invisible border in the unpartitioned sky”. I spoke to Naz and she revealed that the pain of missing her father, who was a POW in India post the 1971 conflict, made her turn to poetry. In “The Tale of the Incarcerated Tree and the Arrested Pigeon” these lines make my blood run cold: “the homing pigeon lost her way that day/ what is the point of flight if you can never go home?”, and “it is so easy/ to silence a banyan, you just keep on cutting its aerial roots/ before/ they touch the ground/ Before there can be a gesture of witness”. In “Atomic Nuqta”, the Naz's eye (she paints regularly) helps us see a “calligraphy of concertina wires on the displaced and splayed dharti, that which you wore and that which wore you”. “Twenty-Six Soldiers of Lead”, a prose poem, continues in this way:

“Long after the bombers had gone home their mouths still smacked of that falling sky… …one postcard per month. For that was what was allowed. From the old country.”

Words like dharti, nukta, takhti, jhilmil, papeeha and more are liberally sprinkled through the poems. It does not surprise me to find that Naz also writes in Urdu and some of her poetry has also been translated into Bengali. Although she has been living in the United States since the age of 26, most of Pointillism has images from the sub-continent, sometimes wistful, sometimes mocking, always searing.

So “Bhopal station is a cross/ between Partition & Holocaust” and “stars light up the night skies of Kashmir/ maps of occupation made flesh”, while “Bursa and Busra are anagrams whose fingers torch the lungs/ of teenagers diving into history’s nacreous wound”.

Naz’s book is poetically political and always a rebellion against the “hypocrite mullahs” in post-Zia Pakistan “occupied/ by the uppercase Gods/ chamber upon chamber/ of prayer and commerce”. She helps us see more clearly through her mocking lines. In “Epitaph”, for instance, I could see my own Delhi’s Lajpat Nagar:

The monsoon has abandoned this city. Only the mournful signboards of Chinese dentists remain standing. Hoardings among hordes of trash the malnourished buffalos keep chewing and chewing. Death is made of plastic milk diluted with effluent.

Naz’s anger is thinly veiled in Pointillsm. Several of the themes that make up this book coverage and revisit. Not for her the romantic nostalgia of exiled poets which often dot pages upon pages with fragrant jasmine or the call of the peacock. Naz’s words are real, they are rooted in the now, and they are a call to arms for change. For love. For freedom. This is a book that demands to be read and reread.