old post
Rise in Attacks Against Dalits in Gujarat: Yet Another BJP Campaign Strategy?
October 5, 2017 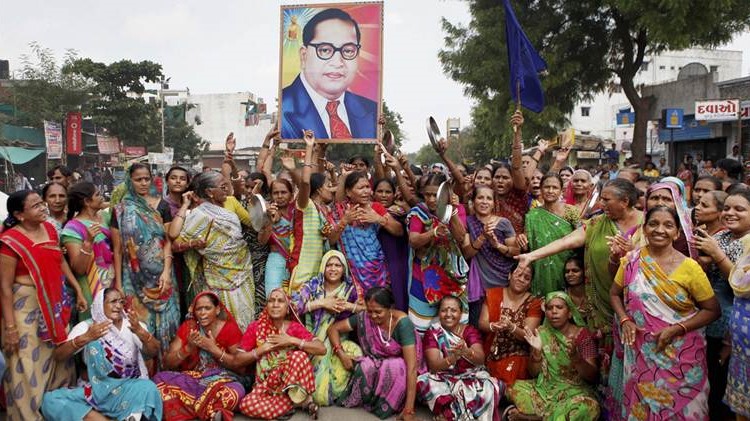 In the last ten days, there have been reports of an increase in attacks against Dalits in Gujarat. Three incidents that have received national media coverage are discussed here to know what might be in store for the Assembly elections in the state.

A Dalit youth, Jayesh Solanki, who used to work as a daily wager in Vadodara went home to Vankarvas, Anand District in Gujarat for Navaratri. According to an Indian Express report , on October 2 , he was supposed to go back and join work. But that morning he was murdered for watching garba, a group dance that is performed during the Dussehra festival. Jayesh had joined his cousin Prakashbhai Solanki and their friend Deepakbhai at the village temple. But Sanjaybhai Patel (the main accused) went to the place where the three were sitting and started to abuse them on caste lines for daring to watch the programme. When Jayesh replied saying, “They were watching the dance like everyone else”, Sanjay got enraged that a Dalit answered back. Sanjay then went and brought seven others who were from the same upper caste, and the eight men attacked the Dalits. Jayesh was held by his collar and pushed to the wall, after which he fell “unconscious.” The doctors said he was dead before he was brought to the hospital.

The same report mentions that all the accused have been arrested. Seven were sent to judicial remand, and the minor amongst the accused was sent to a juvenile home.

In two other similar incidents, Dalit youth were attacked for sporting moustaches in Limbodara village in Kalol taluka of Gandhinagar district. According to a Times of India report , on September 25, Piyush Parmar and his cousin Digant Maheria were returning home after the garba event in their village. They were abused on their way home. Sensing danger, they went home. But the accused from the dominant Darbar community followed the victims home. They abused and beat the youth saying, “Being lower castes, how can you grow a moustache?”. In this case, the police were swift and booked cases against the accused, Mayursinh Vaghela, Rahul Vikramsinh Serathia and Ajitsinh Vaghela.

Again on September 29, in the same village Krunal Maheria, a law student, was attacked for sporting a moustache. According to a report in Hindustan Times, Bharatsinh Vaghela allegedly attacked Maheria when he ignored his taunts saying, “You can’t become a Rajput by sporting a moustache”.

The Dalit youth took to social media sporting a twirled moustache against the diktats of the upper castes.

But the story does not end there. How is it that two identical attacks occur in the same area in a span of 4 days? Had the police not acted in the first incident, it could have been understood that dominant community members were emboldened as the state machinery was siding with them and thus they continued their atrocities. But the police registered a case against the accused in the first case. Yet, four days later a similar incident occurred.

If we look at the incidents, it could be suspected that a larger design is being hatched. Elections are due in the state in a few months and the ruling party BJP is not doing well because its faulty policy measures – Demonetisation and Goods and Services Tax — have affected the traders in Gujarat. The Patidars are also upset with the BJP government for ignoring their demands for reservations and development of the community. The Dalits have been up and against the government for the continuing atrocities against them.

But with the Dalits being only 7 percent in the state, is the RSS/BJP game plan to pit the dominant castes against them? This would create social tensions in the state, and then could shift the discourse away from BJP’s policy decisions when the polls are around the corner.