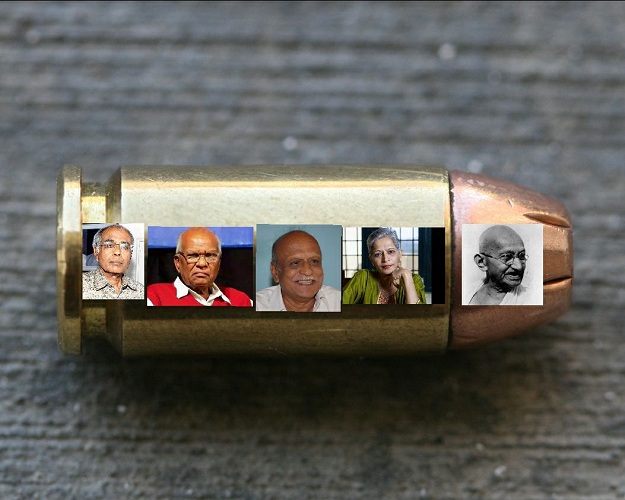 Kerala Hindu Aikya Vedi state president K P Sasikala has not surprised me but it will certainly make the Pakistani Taliban feel ashamed of itself. The leader of parivar of hate has obviously unfolded the genesis of the parivar. It’s as if the parivar is waiting to drink the blood of writers of this country. Sasikala said that if ‘secular’ writers want a long life, they should conduct ‘mrityunjaya’; else, their fate is similar to that of Gauri Lankesh. This is exactly what this parivar of hate stands for. It is an anti-democratic, anti-humanity, Fascist force. It does not believe in the co-existence, multiculturalism, pluralism, and dissent. Their weapons are hate, threat, mob lynching, bullets, and communal riots.

This parivar of Fascists have multiple faces to cheat, and fool the innocent, ignorant masses. Writers, artists, and journalists is a mirror that exposes the vicious face of the parivar of hate. This is why Sasikala can publicly threaten Indian writers. In this context, the writers are neither secular nor nationalists; writers are the ‘mirror’ and ‘conscience’ of the nation and society. If the parivar of hate thinks it will succeed in its mission to build a ‘Hindu Rashtra’ by killing a writer, then it’s delusional.

The parivar of hate can kill a writer or hundreds of writers but not their ideas and thoughts which is a mirror or the conscience of India. The pen held by Indian writers is mightier than the parivar of hate-mongers and their threats. Writers of the nation have their pen seeped in the roots of India’s civilisation.  Indian writers and their pen speak for an idea of India that opposes the idea of totalitarianism. Their pens are the mirror of Indian society; it will continue reflecting what is un-India or anti-India.

She is the light
(for Gauri Lankesh)

The haze of the television screens uttered curses
right after the bullet sang. Right after death
shot itself into the fragile forehead —
the crows were in commotion in the trees.

A woman down has never surprised the rulers.
A woman is down when they hold her down,
when they see a Draupadi in every corner, her sari
in their fists. Always down, a woman will remind

them of slaughtered animals, a body gone limp.
A sleeping line with no agency to re-sketch itself.
Poets will write furious obituaries in sighs and tears
while TV anchors will smile through their lipstick.

The lovers of cow-mothers will chew the cud of hatred
Some will chant for more deaths. Some will call names:
Gauri, you are the Shurpanakha they love to dismember!
But Gauri you’re the righteous Lankesh who’ll fight.

As the poet writes another tribute through the night
can you see the sleeping line moving? It’s stirring
with all might. The cow-worshipping criminals gasp;
swear words forgotten, their emperor looking for cover.

The woman down is also a woman straightening up.
If death is a lighthouse, Gauri was the light. She still is.

Rahman Abbas’ novels include Nakhlistan ki Talash (In Search of an Oasis), Ek Mamnua Muhabbat ki Kahani (The Story of Forbidden Love); Khuda ke Saaye mein Ankh Micholi (Hide and Seek in the Shadow of God) and Rohzin (The Melancholy of Souls). He has also written a collection of essays called Ekkiswin Sadi mein Urdu Novel aur Digar Mazameen (The Urdu Novel in the Twenty-First Century and Other Essays). He was awarded the Fiction Award in 2011 for Khuda Ke Saaye Mein Ankh Micholi by the State Academy of Maharashtra.

Born in Assam and currently based in Hyderabad, Nabina Das is a poet and writer, a 2016 Commonwealth Foundation correspondent, and an alumna of Charles Wallace fellowship, Sangam House, and Wesleyan Writers Conference.