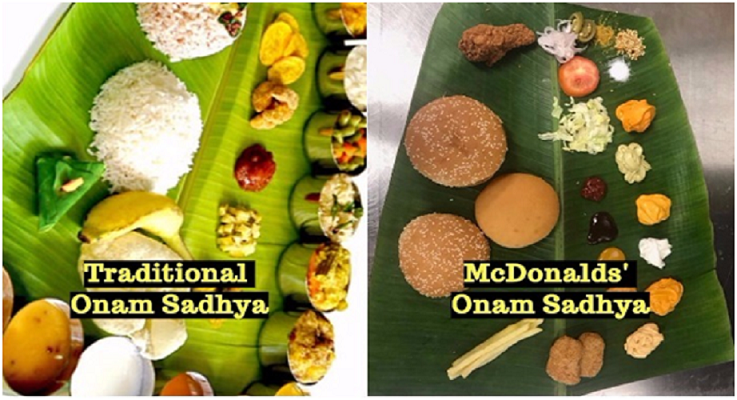 While the festival of Onam is inseparable from the legend of King Mahabali and Vamana, it is also a festival which marks the summer harvest. Onam is primarily a Hindu festival. Traditionally, the Christian communities of Kerala also celebrate Onam with much fanfare. It is touted as a cultural festival and not a religious one. A reason for this can be Onam’s status as the official state festival of Kerala. Consequently, its secular nature is emphasized.

The festival has been rejected and opposed by many due to its casteist nature. The legend of the “asura” King Mahabali being vanquished by Vamana reeks of brahminical supremacy. The BJP national president Amit Shah’s controversial “Vamana Jayanti” greetings for Onam last year, sought to valorise this very aspect of the festival. This year again, a video of a group of nuns in Kerala performing the traditional Onam dance “thiruvathirakkali” provoked sharp retorts from right wing supporters.

The culminating day of the ten-day Onam festival is known as Thiruvonam. One of the main attractions of this festival is a grand feast known as Onamsadhya, which is served on Thiruvonam. Onamsadhya is a nine-course vegetarian meal, and attending this feast is deemed to be an indispensable ritual of the festival. This year what stood out amidst the festivities was the McOnam Sadhya, which was being displayed at a McDonald’s outlet in Thrissur, Kerala. In its own version of the Onamsadhya, McDonald’s prepared a meal consisting of its burgers, French fries, chicken nuggets and various dips and sauces on a banana leaf. The arrangement of these items closely imitated the arrangement of the dishes in the traditional feast. The visual similarity was striking. This garnered mixed reactions as the image went viral. Many people objected to the westernisation of the traditional feast. As anticipated, it was the youngsters who were keener about trying out this innovative Onamsadhya.

In their collective bid to capture the Indian markets, American global food chains like KFC and Subway, have routinely come up with Indianised recipes of their staple products. McDonald’s is certainly not alone in this. But this wasn’t a case of launching a new item like the McAloo Tikki. What is interesting is that with the McOnam Sadhya, McDonald’s did not choose to adapt or incorporate the recipes of Puliinji or Avial (or any of the other items of the Onamsadhya) to come up with a hybrid recipe. This was just a case of a local outlet capitalising on its sales by tapping into the festive atmosphere, with its regular products.

Over the years, the proliferation of these global food chains has not only captured the markets and modified food habits, but also impacted a major change culturally. This latest foray by McDonald’s raises interesting questions on both sides of the debate. Does this fast food incursion merit the ire of the traditionalists? Does it tamper with the sanctity of the traditions of this arguably upper caste Hindu festival? Do deviations from age old customs and traditions lead to changes in the day to day practices and cultural attitudes of our society? It is evident that the casteist and communal attitudes embedded in our social fabric have not found a remedy in westernisations and “modernisations”. Yet, when faced with change, is it not necessary to take stock of what is and isn’t worth changing in our traditions? The answer to these perpetual dilemmas, however, does not lie in dealing with the machinations of these profit-driven global chains.

All for a Toilet: Propaganda or Social Reality?