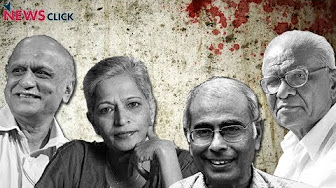 When a murder takes place, the priority is obviously finding the killer. But perhaps in Gauri’s case, as in Prof Kalburgi’s, even if the killers are found, it may provide only a partial answer to the question `who?’.  The killers in these cases, and in the earlier two cases of Dabholkar and Pansare, were obviously professional assassins. They were mercenaries experienced in killing. Gauri’s killers came in the dark and vanished like ghosts.

Why was Gauri killed? All political parties have condemned the murder, all of them  have expressed their shock. The Congress government even gave her a State funeral! There are conflicting theories  doing the rounds,  red herrings are dragged in. Kalburgi’s death was called the result of a property dispute by the investigating police team and some politicians, the Naxalites are hinted at in Gauri’s death. Protesting on Gauri’s behalf  seems like shadow boxing. Whom are we fighting? The murder seems to be surrounded by a dark fog of confusion.  Is there a power behind the curtain operating the strings, making the moves? Or is that too a chimera?

The one question that urgently demands an answer is: are we now living in a country where people are killed because of their ideology, their  beliefs? Are we living in a country where dissent is silenced by a bullet?  Gauri was a vehement anti-Hindutva person.  She was hated for her views, she was called a Naxal sympathiser, a Hindu hater. But, however strong her views, she posed no threat to those she opposed. Nor were  the three men killed earlier any threat.  And yet all of them  were chosen targets, their murders well-planned. There is only one explanation for this: Gauri and the others were killed  to send a message to all those who oppose this  idea of  India. The message is: if you dissent, we are waiting for you. To kill some and instill fears in many is a way of silencing people.

Today, we are being told what being a patriot or a nationalist means. Those of us who have lived in this country all our lives and are tied to it by an umbilical cord are bewildered and angry. Do we need anyone to tell us how to love our country?  Perhaps one of the things these deaths have told us is that one of the best ways of loving our country is refusing to be afraid, refusing to be silenced.

`The only way to keep ourselves free is to speak, not to let ourselves be silenced either by pernicious laws or by mob screaming.’ These are th words of an American crime writer Sara Paretsky in an essay written after 9/11.  She speaks of `every writer’s difficult journey’ as a `movement from silence to speech’.  Those who want to silence dissent  are trying to force people into making the reverse journey – from speech to silence. Those  who are trying to silence voices forget one thing:  silence one voice and a hundred, a thousand voices will take its place.

Gauri Lankesh is dead.  She was a brave woman who tried to  live a life according to her beliefs and convictions. Perhaps the protest meetings, the candle-lit vigils, the banners, the placards may be useful in making people aware of how important  it is to speak, to refuse to be afraid.