old post
The Ghost of Narasu Appa Mali is stalking the Supreme Court of India
September 6, 2017

As a feminist lawyer, for five decades, women have approached me with their concerns within family including what they face in their day-to-day existence, from domestic violence to denial of property, mobility and dignity. My job has been to turn the everyday reality of women’s lives into legal claims, by making the invisible visible, by finding applicable legislations, where it does not exist, by creating it. I have long known that this is what the practice of law is all about, naming and claiming rights. Our magazine “the Invisible lawyer” has been inspired by that very process of law making, of lawyering and of litigating rights. I was thrilled to read Justice Chelameshwar’s judgment on the right to privacy, where he described the process of identifying the right to privacy as the process of mining “dark matter” or “invisible matter” from the Constitution. Us women who are disenfranchised, in law and practice, have always known that our rights are invisible, until a hero comes forward and says, this is my birth right. This is what many of my clients have done and thereby created a better world for others to live in.

I realised early in my career that there is nothing personal about personal law. Marriage is a social and economic institution for women of all communities, there is similarity in their problems. I have often said that married women are less protected than trespassers, who can only be thrown out by due process of law. Married woman in contract can be thrown out of the matrimonial home by locking the door to the house and, yes, changing the lock. Subordination sanctioned by law is the political reality of women which they need to overcome if they are to get justice from the courts. In the field of family law this subordination is to religion which sanctions patriarchy, under a regime of personal law. It is, therefore, critical if the project for justice is to succeed, to separate religion from the law relating to marriage, divorce, guardianship of children and succession rights. 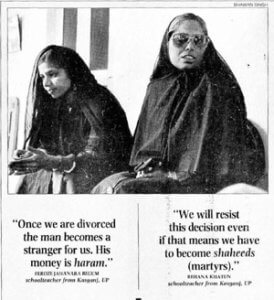 Mary Roy challenged the unequal inheritance law among Syrian Christians which gave to the son the entire estate, and a princely sum of Rs. 5000 to the daughter. Mary refused to accept this discrimination and successfully challenged the law. She won a major battle for equality, however this result was achieved not by the Courts declaring the law unconstitutional, but by declaring that it simply did not apply to Syrian Christians once Travancore Cochin itself ceased to exist, perhaps as a concession to a powerful Church. A classic case of discrimination was not recognised as being based on sex. Many are the ways of defeating the gains of the law. It has been widely reported that the Church was quick to advise its followers, that all men should quickly make their wills to avoid their property going to daughters. Mary continues to face hostility from her family and Church to this day. Despite all odds she continues her battle for justice.

Gita Hariharan and Vandana Shiva challenged the unequal Hindu Minority and Guardianship Act, 1955, which made the father the “natural guardian”. Once again, a court anxious to do justice to women but not wanting to destabilise the status quo refused to strike down yet another blatant case of discrimination based on sex. It was said instead that in circumstances of neglect by the father, the mother would be the guardian. Here too “personal laws” played a role in denying Hindu Women the rights of guardianship over their children.

Saheen (name changed) was the first woman to challenge the Muslim Women’s Protection of Rights on Divorce Act, 1986, when her husband sent her ‘talaq’ written on the letterhead of a five-star hotel. A humble magistrate in Cochin deemed that she was entitled to maintenance for life not just for the iddat period. Years later, the Supreme Court endorsed that opinion in the Daniel Latifi case. Once again, the Court did not strike down the law as discriminating between Muslim women and other women based on personal laws. A just outcome was achieved by skirting the Constitution. Saheen is surely a role model for many, as talaq did not stop her from developing a rich professional life post-divorce. Her children were already grown and she did not enter into an ugly custody fight but left it to them to make their own choices in life. I introduced her to Mary Roy and they became good friends. This is the much needed camaraderie among survivors. These women identified with each other because of their struggles to upturn the status quo.

It should be obvious that women of all religions and atheists who have no religion, are caged into “personal laws” which are attached to them from birth. I had once handled the case of a Christian woman married to a Hindu who was denied the dead body of her husband on the ground that a Hindu could only be cremated by a son and in the absence of the son, her husband’s nephew claimed that right.

Many of these women who came into my life have asked me questions, why do I not get equal inheritance with my brother? Why can I be thrown out of the matrimonial home with empty hands despite investing my time, emotion and effort in the marriage? Why is it that I bear the child but my husband is the “natural guardian” of my children? And finally, why is it that when it comes to all other employers, the Supreme Court says, there must be a woman on the Internal Complaints Committee for complains of sexual harassment at the workplace, but when it comes to my case, there is no woman on the Bench hearing my case? (This last question was from Rupen Deol Bajaj, whose case was heard by an all-male bench.) Years later, the same question has been asked by many on the question of triple talaq, why was there no woman on the Bench? And while the Chief Justice of India constituted a Bench ensuring religious diversity, how come he forgot gender diversity, more natural and more personal than religious diversity?

I realised early on in my career that the judgment of the High Court of Bombay in Narasu Appa Mali was the one judgment which had the potential to deny women their fundamental rights. In that case, the High Court of Bombay decided that personal laws are not “law” within the meaning of Article 13 of the Constitution of India. I asked myself even then, if it is not law, why is it being enforced by the Courts? Personal laws have now become an island within the Constitution which stops at their doorstep. Effectively, for women in family law, the Constitution does not exist.

It is an irony of fate that the Narasu Appa judgment was invited by a Hindu man who claimed that the Hindu Bigamous Marriages Act, 1946, abolishing bigamy for Hindus but not for Muslims, was “discriminatory”. The Court did not accept the argument and upheld the validity of the law, but in doing so held that personal laws are not “law” and, hence, could not be challenged as being unconstitutional. A judgment given in defence of gender justice has become an albatross around their neck making them bound hand and foot to personal laws.

The triple talaq case presented an ideal opportunity to exorcise the ghost of Narasu Appa and hold that unilateral talaq was discriminatory and that the discriminant was based on sex alone. This did not happen. I am disappointed that the ghost is as clearly visible today as it was in 1950 when the judgment was delivered, perhaps even more so. It stalks every court as it did the Supreme Court of India in the Triple Talaq judgement delivered on the 22nd of August, 2017, by what has been described as an “inter-faith” court. What is it about religion that blinds a judge to gender justice?  Can they in their minds, not separate their own religion from the judicial function?

In the Triple talaq judgment, the court fails to separate religion from State, undermining a basic feature of the Constitution, secularism. There is a failure to understand that religion is not a right but a freedom, freedom of conscience.

We all have the right to believe what we must, what we don’t have is a licence to act in a discriminatory manner. A moment which demanded modernization of the institution of marriage has been lost.

Religion is based on faith and a matter of conscience which no law can dictate. I have often said the expression “religious laws” is an oxymoron. What is religion is not law, and what is law is not religion. Justice Kurien during the hearing distinctly stated in court “the time to exorcise the Ghost of Narasu Appa is now”. I would like to ask him, why did he not do it? Only two of our five judges held that the law was “manifestly arbitrary” allowing for the first time the entry of Constitutional law into the realm of personal laws. However, Justice Nariman and Justice U U Lalit are in a minority and that is not the law of the land. Perhaps one day, more brave women will come along and they will become what Justice Nariman described in the right to privacy judgment the “great dissenters”.  For now the Ghost of Narasu Appa stalks the Supreme Court of India.

I continue to be friends with many of those women I represented in Courts. The relationship between a lawyer and her client has always been a very special and enriching one for me. They shared their lives with me and me with them, and we became co-travellers on a personal, political, legal journey. Just as I changed their circumstances, they changed me as a lawyer and as a person, and made me who I am today.

Each of these women became the path breakers, who challenged family, community, religion and the law itself. Yet they did not start out as such. Many a time all they sought was to live their lives peacefully and joyfully, surrounded and supported by their family and within their community. But the harsh patriarchal family and community structures denied them dignity and basic rights, thereby compelling them to step outside and knock the doors of the Courts for justice. In this process, they become heroes.

At the end of a long career in representing women I tell them Bob Dylan’s “the answer my friend is blowing in the wind” But there is hope, so long as there are women like Shayara Bano, Zakia Soman, Noorjehan Safia Niaz the question will refuse to go away. Women will reclaim the Constitution for themselves and for us all.