In December 2014, Amit Chaudhuri, novelist, essayist, and Professor of Contemporary Literature at the University of East Anglia, decided to add to the activities of UEA in India by starting a series of symposiums and conversations that would inhabit and aim to create a space different from both the "academic conference" and the "literary festival"'. The aim of the symposium was to question and possibly reinvigorate the meaning of the literary today by extricating it from its well-worn locations, and by interrogating the values imposed upon it by the market. The first collection of essays and papers has now appeared from OUP in India and the USA, and Boiler House Press in the UK. Here, below, is Chaudhuri's original mission statement, to which the participants – a mix of novelists, poets, academics, translators, and publishers — of the first symposium had responded. 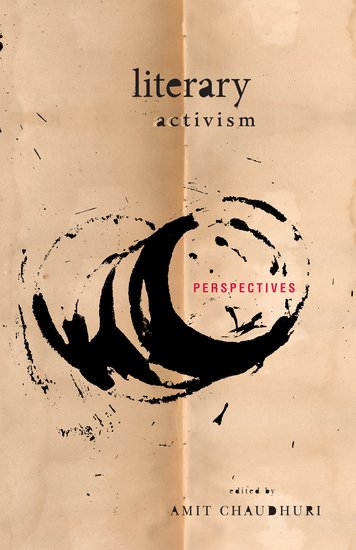 From the mid-1990s onwards, we witnessed a convergence between literary language and the language of publishing, for it was publishers, increasingly, who told us about the ‘masterpieces’ they were publishing (the word, like the literary itself, had by then been disowned by most literature departments). We also became spectators, in the sphere of literary publishing, of a species of activity that added a fresh – and what soon became an indispensable – dimension to the publishing of novels and, indeed, how the novel would be thought of: a mode of intervention that can only be approximated by the term ‘market activism’. The bolder agents and publishers abandoned the traditional forms of valuation by which novelists were estimated, published, and feted, and embraced a dramatic, frontiersman style of functioning that involved the expectation of a reward more literal than any form of cultural capital. Writers too made a pioneering contribution to this scenario. Andrew Wylie’s acquisition of Salman Rushdie’s novel The Satanic Verses and Rushdie’s defection from his erstwhile agent is one example of the radical break effected by market activism. Vikram Seth interviewing a selection of London agents before finally choosing Giles Gordon to represent his novel A Suitable Boy is another. Then there are Martin Amis’s moves to a new agent and publisher for The Information and the trajectory of Arundhati Roy’s The God of Small Things, from its discovery by Pankaj Mishra (then the chief editor at HarperCollins India) to the flight taken by the agent David Godwin to India to meet Roy: all events in this landscape. Market activism was not, as many of these examples remind us, unconnected to the idea of the discovery of new literatures. Certain instances that form this narrative might have started out as straightforward acts of literary valuation (such as Mishra’s excitement over Roy’s novel), and then, as they developed inexorably, become full-blown instances of market activism.

Against roughly two decades of publishing, disseminating, and reading fiction and literature shaped by such exemplary actions, one might now ask about the place today of literary activism. What is ‘literary activism’? The question has various implications, since we presently live in an epoch succeeding the financial crash of 2008, when publishing houses and bookshop chains – even the book itself – and all the other paraphernalia of market activism (some of which intersects, significantly, with the paraphernalia of the literary) are in disarray, or passing into extinction. Nevertheless, we continue to speak of the literary, and the habits of reading and writing, in the curious, inadvertent, but potent mix of urgent market-speak and superannuated literary criticism characteristic of the past two decades. No robust new critical discourse has emerged. What values, then, in the present context, is literary activism drawing our attention to, and what are its ends? Is literary activism a response both to the successes and, lately, the failures of market activism, or does it argue for a view of writing, writers, publishing, and the literary notwithstanding the market? Does it differ from market activism? For instance, how do we distinguish the journey that David Godwin made to India from the one Naveen Kishore (founder of the Calcutta-based independent publishing house Seagull, which came into its own internationally in the mid-2000s) made to Germany to acquire world rights from Suhrkamp’s Petra Hardt for the works of writers including Thomas Bernhard? Godwin’s entrepreneurship resulted in fanfare, and a substantial reputation – for the author and agent certainly, but also for the viability of the literary novel; Kishore acquired rights on ‘trust’ from some of the leading German authors of the twentieth century, and often for small sums of money.

Is literary activism similar to what was earlier known as ‘championing’? If so, in what manner do the writers being championed participate in the fashioning of a context for championing? (This question arises from the matter of ‘trust’ to which Kishore alludes.) What is literary activism’s relation to the emergence of ‘new literatures’, and in what way is that relation reminiscent of, or divergent from, the relations created in the past in this regard by market activism?

Maybe these questions can be set against two relatively recent events that would qualify as literary activism. The first is the South African critic and academic Derek Attridge’s contribution to the rise in the reputation of the South African novelist and short story writer Zoë Wicomb. Attridge’s criticism has argued for a revaluation of Wicomb’s writing in a way that has led to a genuine upsurge of interest in her work in the past five years; but this interest cannot be simply connected to a fresh narrative of ‘new literature’. Also, Attridge’s work on Wicomb is part of a project neither just for a national (in this case, South African) literature, nor a postcolonial one. Both Attridge and Wicomb are migrants who live in the United Kingdom; yet the interest in Wicomb as a result of Attridge’s advocacy is not entirely reducible to an interest in the literature of migration. Wicomb, situated as she is at the crossroads of longstanding obscurity, artistic achievement, Attridge’s preoccupations, South African literary history, and migrancy, reflects all these concerns in the shifting way that the ‘literary’ does. It’s this shifting quality that, in the end, the context of literary activism in Wicomb’s case foregrounds.


The second example makes it necessary for me to make an autobiographical interjection. In 2008, I proposed to Peter D. McDonald of St. Hugh’s College, Oxford, that we nominate the poet, critic, and essayist Arvind Krishna Mehrotra for the post of Oxford Professor of Poetry in 2009. My reason for thinking of Mehrotra was that he defeated almost every prevalent convention of what a postcolonial or Indian writer might be, and that his criticism reflected the anomalousness of his literary practice. I know that Prof. McDonald was in agreement with me in this assessment. The point of the nomination was not simply to create a comic disruption, as when Benjamin Zephaniah became a contender in 1989, and a competitor to Seamus Heaney. But neither was the point to win the elections. We intended to fashion an event; but, in retrospect, it seems that the irrelevance of winning was in some ways a feature of its conception – not because of some quietism, but because the tertiary status of winning gave us the freedom to make the maximum possible impact from revisiting, in Mehrotra, the notion of the cosmopolitan writer. So there may well be in literary activism a strangeness that echoes the strangeness of the literary. Unlike market activism, whose effect on us depends on a certain randomness which reflects the randomness of the free market, literary activism may be desultory, in that its aims and value aren’t immediately explicable.