“Answer Us, Uttara Kodi, Jawab Do” for Dabholkar, Pansare and Kalburgi 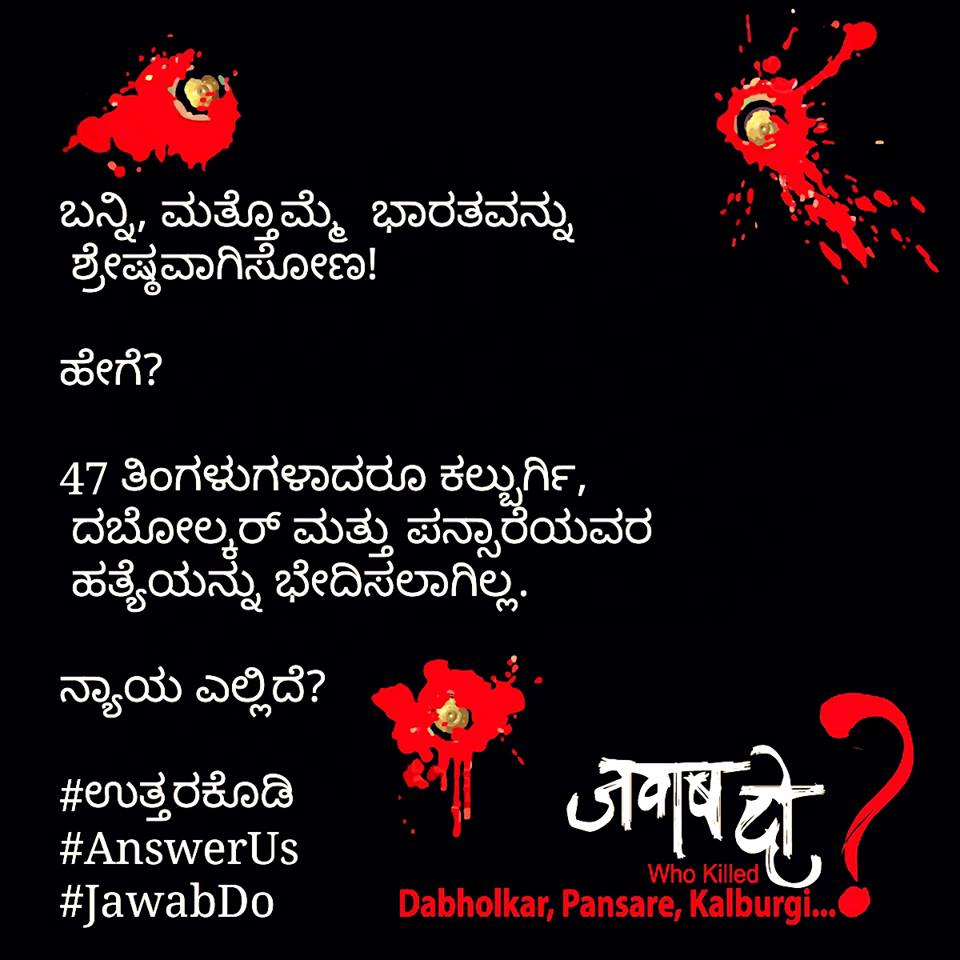 Image Courtesy: I am Kalburgi

It has been two years since the assassination of Prof. M. M. Kalburgi, the former Vice Chancellor of Kannada University, Hampi. Kalburgi was a noted scholar in the field of culture of the people of Karnataka. His murder on 30 August 2015, the murder of Narendra Dabholkar on 20 August 2013, and the assassination of Govind Pansare on 20 February 2014, reflect the murderous mentality of fundamentalist forces which have been responsible for spreading hatred, intolerance and violence in the country. Such attacks and threats strike at the root of democracy, which the state is obliged to protect. The state’s duty to defend our fundamental right to life, and to freedom of speech and expression, thus, needs to be reiterated and demonstrated.

The campaign “AnswerUs/UttaraKodi/JawabDo” has been launched today, 9 August 2017, to demand the state and the central governments to take the necessary steps towards a thorough and speedy enquiry into the murders of Kalburgi, Dabholkar and Pansare, and arrest the culprits at the earliest. This three-week long social media campaign is initiated and organised by the core group of the “I am Kalburgi” Facebook Page from Karnataka along with the Maharashtra Andhashraddha Nirmulan Samiti (MANS). The campaign is supported by the noted rationalist Narendra Nayak, Kannada poet Chandrashekhar “Champa” Patil and other public intellectuals.

The “AnswerUs/ UttaraKodi/ JawabDo” campaign uses social media sites like Facebook, Twitter, Google plus, WhatsApp, et al to reach to a wider audience, both nationally and internationally. The social media campaign aims to seek the attention of the CMO, PMO and the Judiciary to answer why the culprits behind these assassinations have not been brought to justice even after four years of committing the crime.

MANS volunteer Anannya said that earlier in the year, one of the arrested accused in Pansare's murder was released claiming lack of evidence. She added that "we want the ignorant government to react" because right to justice is a fundamental right under the Constitution and "justice delayed is justice denied."

One of the major demands of this campaign is for Karnataka government’s immediate attention in passing the anti-superstition bill as a homage to Dr. Kalburgi. Narendra Dabolkar originally drafted the anti-superstition act, which was passed in Maharashtra Assembly following his murder and pressure from MANS.

An appeal is made to all the citizens of this country to join the campaign and make the voice of rationality be heard (request is made to use Twitter the most). Question the responsibility of the state regarding the assassinations of Dr. Narendra Dabolkar, Pansare and Kalburgi using the hash tags #UttaraKodi, #AnswerUs and #JawabDo.