Poster for one of the performances of the play "Bhablai Bhalo"

The recent communal flare up in Basirhat in West Bengal has raised several questions about the future of communal harmony. Equally, it has raised questions about the ‘secular record’ of West Bengal. What could be the smaller cultural reasons for greater communal harmony in West Bengal? Consider a popular play that emerged from the group theatre movement in the Bengali theatre – Bhablai Bhalo (Better to Be Like Bhabla ). Performed for the first time on 26 April 2004, it was a response to the 2002 Gujarat riots. Written and directed by a veteran of Bengali theatre, Ramaprasad Banik (1954-2010), the play was an instant success. Definitely a political play, Banik chose the form of comedy to tell the story of an ageing village school master, Ramnidhi Bhattacharya, and the dispute over his property. It is difficult to estimate the exact number of performances of the play, but after speaking to some members of the cast, I can Say that the number is around 200.

The play was a microcosmic representation of the bigger national debate that asked, “Who owns ‘Ram janmabhoomi’”? The setting of the play is the small village of Bonobashi, where villagers believe Rama had set foot during his 14 year old exile. In a clear reference to L.K. Advani’s rath yatra which had stirred communal tensions throughout the 1990s, the villagers celebrate Ram’s arrival in the village every year with a yatra. Ayodhya is a legal dispute over land, and in the play too, the main plot centres around the crisis over property. The Hindus of the village coax Bhattacharya, their school teacher,  to give the land away for a mandir, while the Muslims hope he will give the land away for a madrasa. Another crisis begins when Bhattacharya begins to lose his sight. Nobody from the village offers help. It is only Bhabadulal – an unemployed youth who shares the ground floor with Bhattacharya – who tries to help. 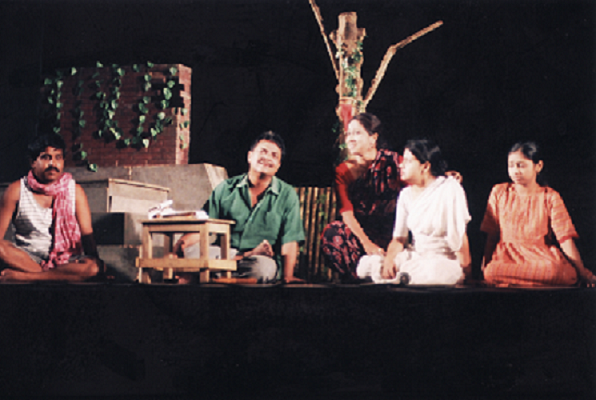 He normally earns money by working for politicians with criminal records; he spends time in jail in lieu of them whenever they get convicted. However, like the typical innocent, village rake, he is the only person who is truly invested in Bhattacharya’s plight. They have to go to Delhi for an eye operation but don't have the money. He cooks up a story about meeting Rama and claims that Lord Rama has  offered one pair of his khorom (slippers). As a result, people from far-off regions come to see Rama’s khorom and offer money. 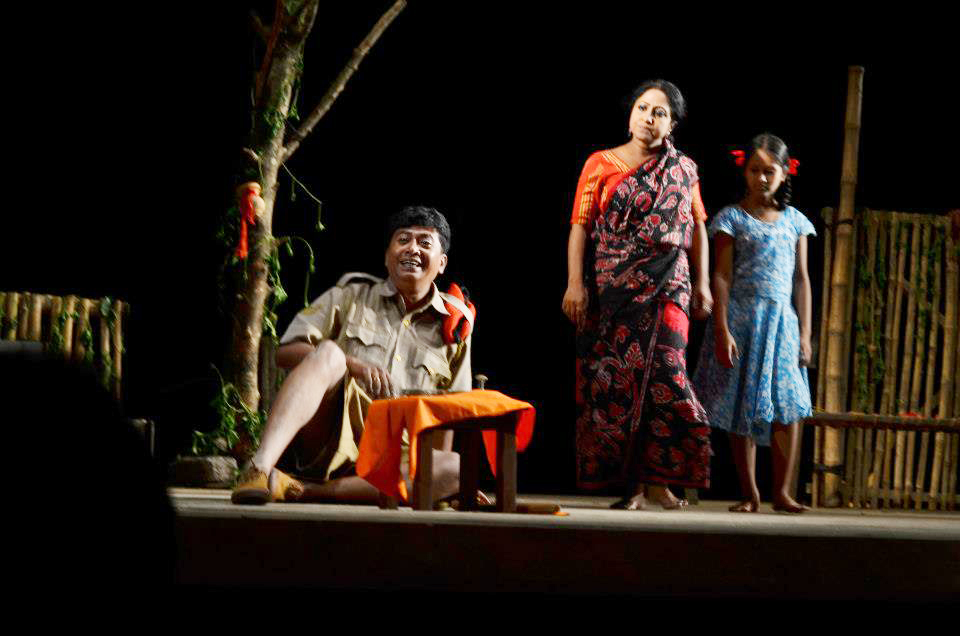 Bhabadulal plans to take their money, and run away to Delhi with Ramnidhi Bhattacharya. But before this happens, the ploy is revealed, and the Hindus of the village come to threaten Bhabadulal and take back their money. When the villagers see that their money has been laundered, they beat Bhabadulal till he is unconscious. We see men in saffron robes trying to lynch Bhabla – who is Hindu – to death.  That lynching is no longer play-acting, but a recurring event on our streets, should tell us how horrific our reality has become.

We see men in saffron robes trying to lynch Bhabla – who is Hindu – to death.  That lynching is no longer play-acting, but a recurring event on our streets, should tell us how horrific our reality has become.

While, for some, art is a representation of reality; now I see reality replicating an event I saw in the theatre many years ago. In the play, though, Bhabla, survives and while writhing in pain, asks: “My back has been trained by all the beatings I have received from police batons; so easy to kill me, eh?”

Banik was trained under Shambhu Mitra, the founder of the group theatre movement in Bengali theatre. Banik’s first play was Putul Khela, where he played a five-year-old child in Bohurupee’s production. Unlike his contemporaries, he was perhaps the only actor who had worked with Utpal Dutt, Ajitesh Bandyopadhyay and Mitra – the three pioneering thespians of the group theatre movement.  After Mitra retired from theatre, Banik formed Chenamukh and staged some of the most memorable adaptations in the 1980s. For instance, he directed Aagshuddhi, adapted from Arthur Miller’s The Crucible. There were reports of witch-hunting in Purulia village in 1984, and Banik quickly staged Miller’s play to represent the events taking place in Bengal.

In a way, Bhablai Bhalo falls within Banik’s vision of theatre. Like Aagshuddhi, it responds to a contemporary crisis. In the newspaper advertisements for Bhablai Bhalo, Banik underplayed the relevance of the play. He staged this with Theatre Passion after two brilliant tragedies – Antar Bahir (1999) and Sparshak (2002), the former earning him the Paschimbanga Natya Akademi award for Best Direction. That he was staging a loud comedy was perhaps unexpected and, in one of the promotional posters, reproduced below, he  ironically said, “Ebarer natok aahamori kichu noi” (This time, our play isn’t that great). 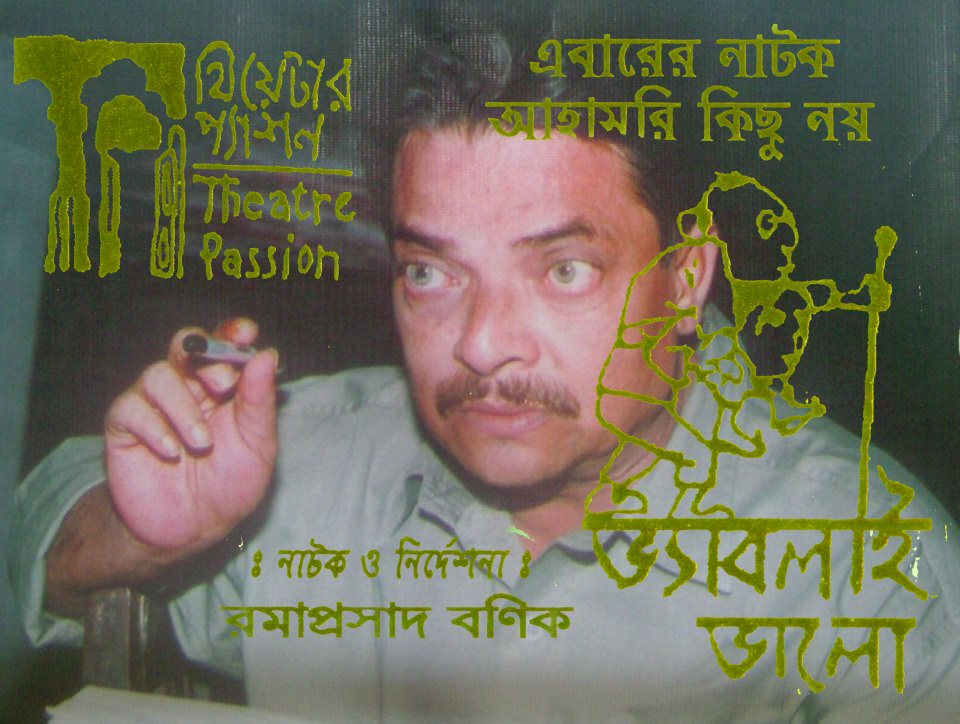 The sketch that Banik had drawn can be said to be a remaking of the iconic Gandhi image. Gandhi has a seminal place in Bengal for his role in suppressing communal tensions in Bengal just before the partition. In 1946, he visited Noakhali to dissipate the communal antagonism between Hindus and Muslims. 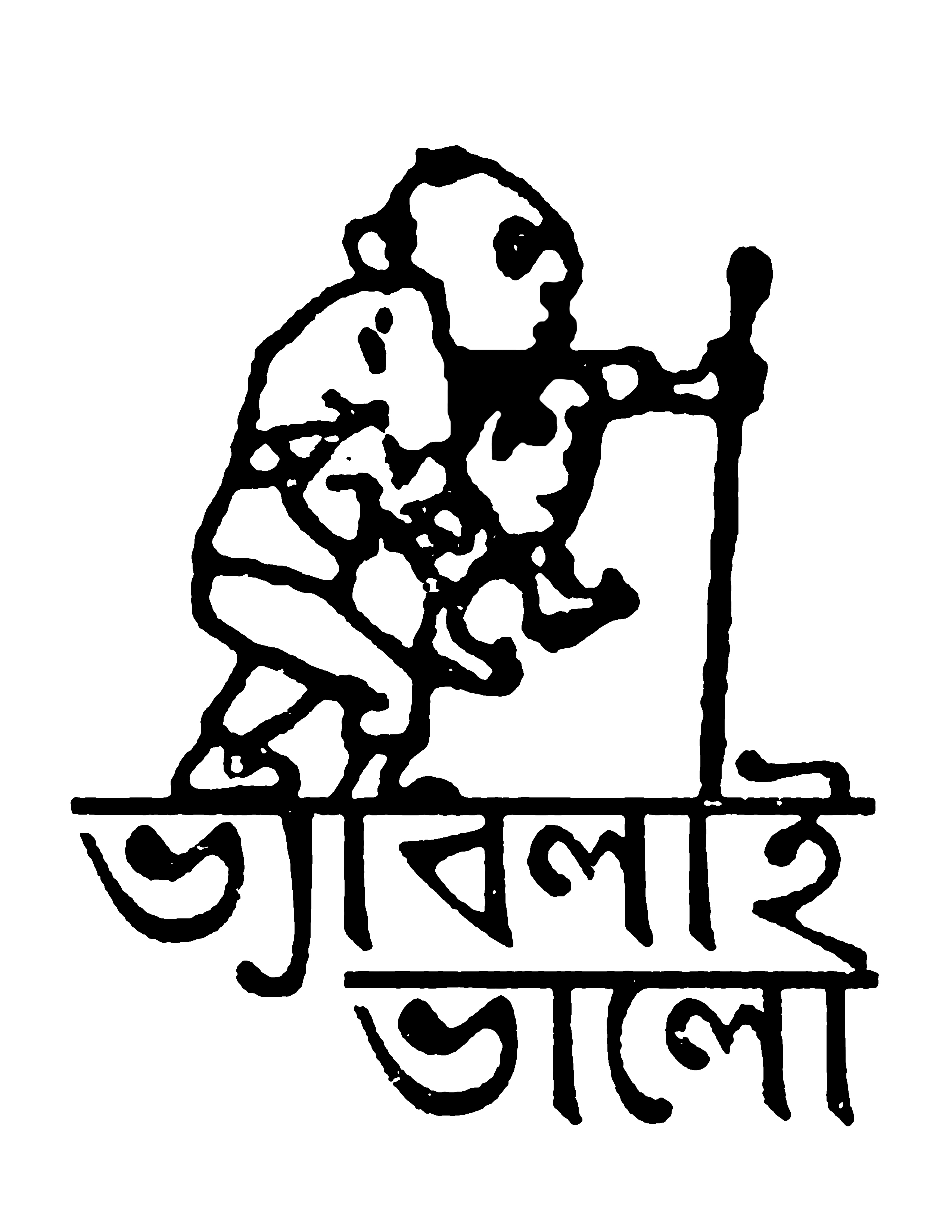 In Banik’s illustration, the Gandhian teacher with his stick is carried on the back by his pupil. As he was lampooning the iconicity of the Gandhian image, he was also subtly drawing his viewers closer to Gandhian notions of communal peace, just after the 2002 Gujarat riots.

The play, however, had no direct mention of the riots. Banik, instead, laid bare the ridiculousness of communalism, and he used unabashed parody and irony to convey his point. The only direct reference, however, was the policeman, who, while defending and explaining the importance of his job, says, “If the police had done their job, then Babri Masjid would have never been demolished.” Similarly, Bhabla’s secular beliefs are revealed when the azaan is sung and Bhabla, a Hindu, folds his hands in prayer: small gestures stand out and speak more than any sloganeering can.

The only direct reference, however, was the policeman, who, while defending and explaining the importance of his job, says, “If the police had done their job, then Babri Masjid would have never been demolished.”

The first time I watched Bhablai Bhalo, I was appalled and delighted by the sheer vulgarity of this comedy. I was in the ninth standard, watching it at Lady Ranu Mookerjee Mancha, part of the Academy of Fine Arts. a cultural complex beside Nandan. For those who are not familiar with theatre in Calcutta, it holds the same prestige as Prithvi Theatre in Mumbai. The sheer vulgarity of the jokes in Bhablai Bhalo was a major shock for the more urbane audience. But in the course of the play, which is a little over two hours in duration, the suppressed laughter in the beginning would soon turn into loud guffaws. There is hardly any place in West Bengal with a proscenium stage where this play has not been performed. The language of the play speaks to the mofussil, rural, or urban audiences alike.

In the play, Banik complicates notions of rational thinking (embodied in the school master) and older ways of community living that is centered around religion. The play ends with the image of the women waving at them on the left, and the men – Bhabadulal, Ramnidhi Bhattacharya and the police constable on their way to Delhi for the on the right. 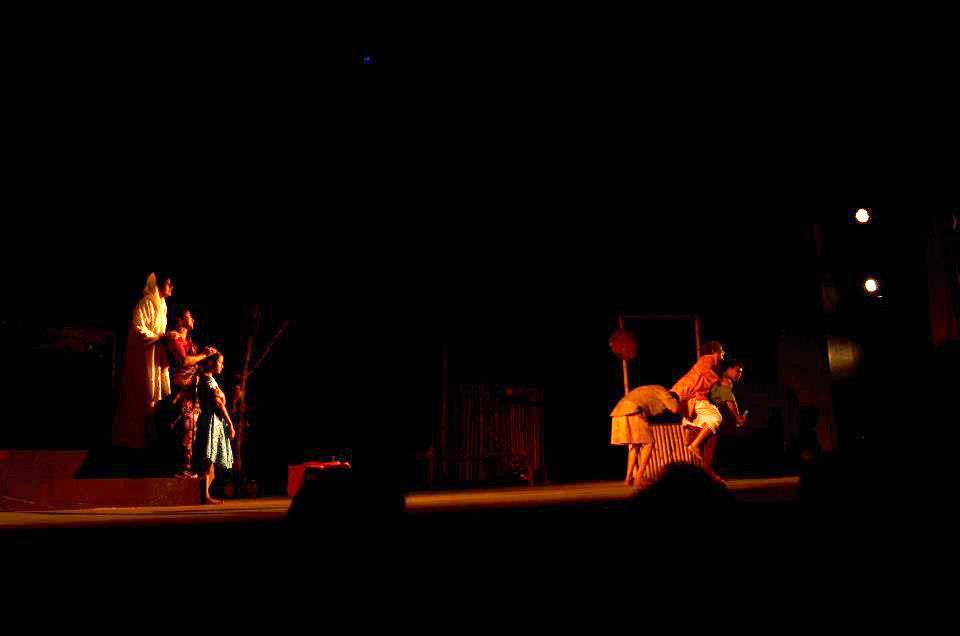 The shift from the rural village to the city marks the onset of modernity and is a recurring image in Indian literature. But Banik, who has written over forty plays in Bengali, complicates the idea of modernity with several sub-plots and intrigues. Characters who are supposed to be opposed to each other work in ways to solve small crises in the village. For instance, when Ramnidhi Bhattacharya doesn’t open the doors to his house, the local constable is called. But he doesn’t have too many people from the local police station, so the most famous thief in the village, Jhama, is called to open the bolted doors. The police and thief work in tandem to resolve a minor, local crisis. Similarly, when the mob comes to lynch Bhabla, they demand the constable to arrest him for money-laundering. He refuses, saying that he will not be forgiven by Rama or Allah. In the end, he helps Bhabla and Ramnidhi go to Delhi, joining hands with the thief Jhama who was entrusted with the task of fleeing with the money. This play between chor-pulish (thief and police) is a recurring motif for comic scenes in Indian theatre, brought to perfection perhaps by Habib Tanvir in Charandas Chor. The villagers also invert the logic of the modern nation state to create their own logic – thief and police work in tandem for a good cause. They do not follow the law because they can see the lapses in the law, and instead, show their allegiance to other ties of kinship. In this case, the ties are for their local school master, Ramnidhi Bhattacharya. The inversion of the logic of the modern nation state, particularly the Nehruvian nation state, can be also seen in Indian fiction, most notably in Srilal Shukla’s Raag Durbari.

Keeping these problems aside, what is remarkable in the play is that Banik never loses grip over the issue at hand. The question of ownership over land is a problem that is central to the plot, just as it is central to the problem in Ayodhya. Banik last performed in the play on 22 December 2010 at A G Bhavan. He was hospitalised on 25 December, and died two days later. Theatre Passion continued performing Bhablai Bhalo several times after his death, with several changes in the cast. 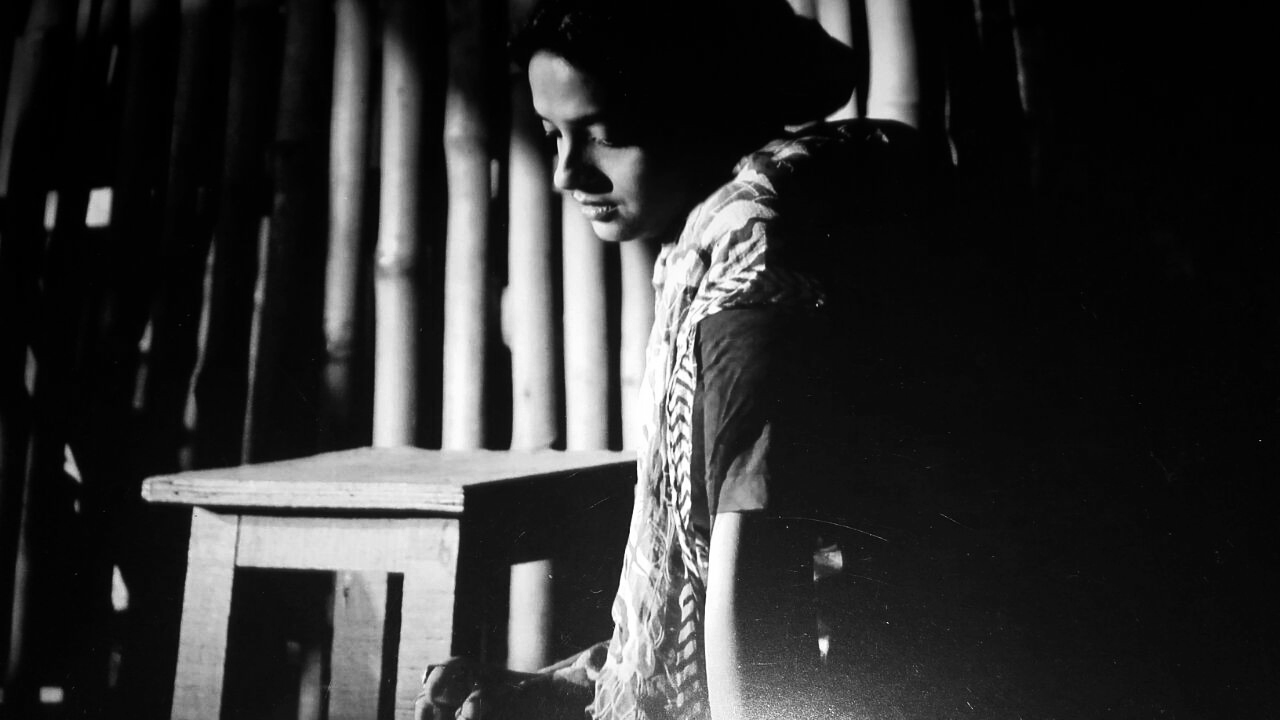 I was roped in to do a few shows of the play and performed for the last time in 2015, in this play, at Howrah.

The only time he was filmed during a performance was when the play was performed at Sree Ram Centre in Delhi in 2010. I had shared the stage with him the previous night – for the first and only time. He stepped in to play a character in his stage adaptation of Satyajit Ray short story "Anukul". Ramaprasad Banik and Souradeep Roy in Anukul/ Performed at Sree Ram Centre,Delhi in 2010

The next night, I took the camera from one of the cast members and filmed some scenes. Little did I know that it will be the only surviving archival material for a thespian who had had a five decade long career in the Bengali theatre.

In one of the scenes, Bhabla teases his widowed sister, masquerading as Ravana. I clearly remember his booming voice in the packed auditorium in Delhi – “Ami Raboon, ei naakh kata Surponakha amar bon” (I am Ravana, this noseless Surpanakha is my sister). Sahajiya Nath, who played his sister, responded, “Dada amar Bhabla Rabon” (My brother is Bhabla Ravana). In the scheme of the myth, Bhabla playfully identifies himself as Ravana, Rama’s arch rival, and the lights dim. Amidst rising communal tensions in Bengal, there can perhaps be a way forward if this play travels as it did when it was first performed.


Read more on the Gandhi's role in the Noakhali riots here.

Listen to an interview in Bengali on Bengali theatre with  Maya Ghosh.

Listen to interviews from our "Theatre Today" series with N. Premchand, Ravindra Tripathi and Atamjit Singh.

Listen to an interview on Marathi theatre with Makarand Sathe.