old post
All India Marches for Reservation for Women
July 17, 2017 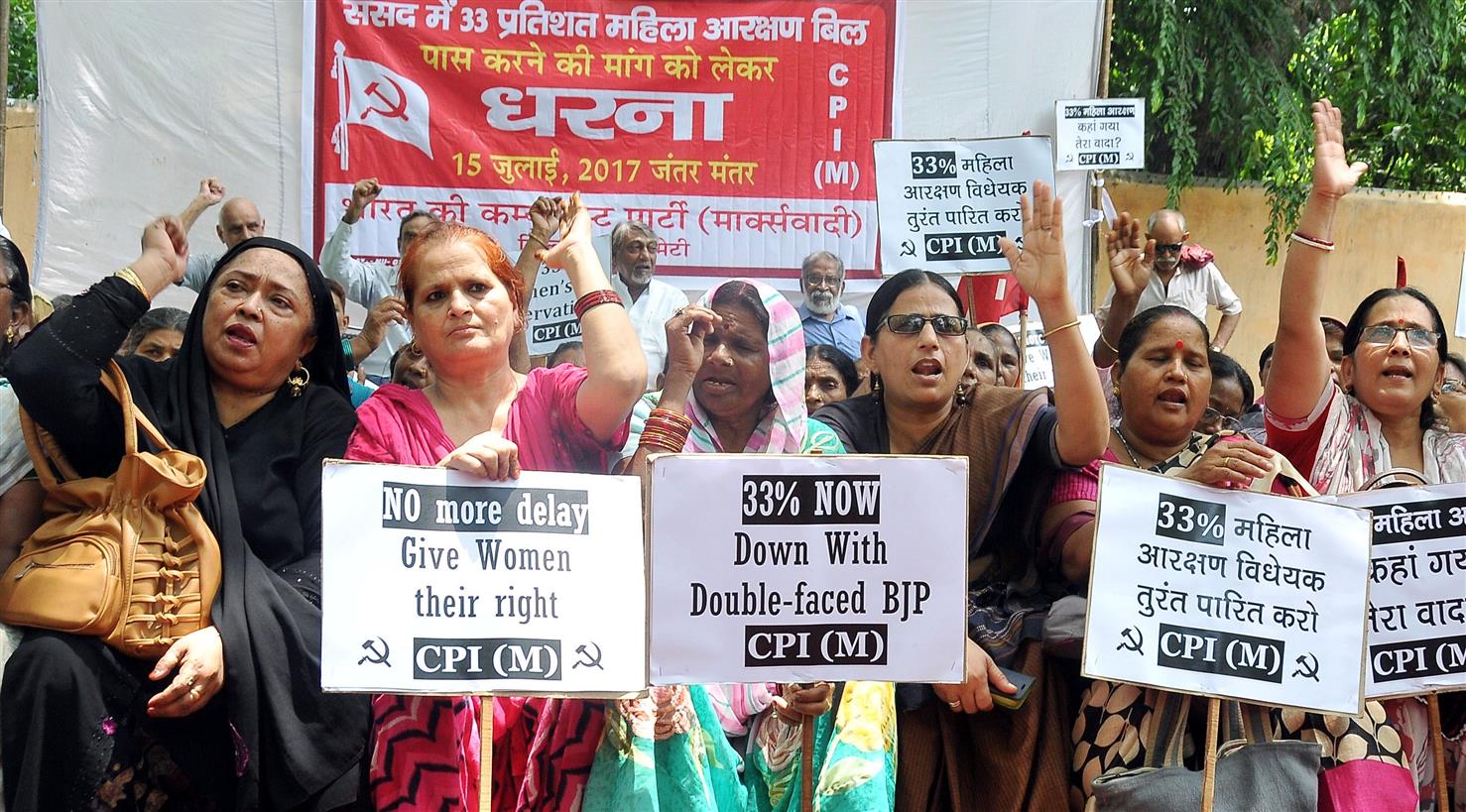 The Communist Party of India (Marxist) intensified its demand for the passage of the Women’s Reservation Bill—pending for 21 years now—by staging a protest in Delhi as well as other parts of the country on Saturday.

Addressing the protesters at Jantar Mantar, CPI(M) general secretary Sitaram Yechury asked the ruling Bharatiya Janata Party (BJP)government to fulfill the promise made in its 2014 election manifesto of passing the long-pending bill if the party came to power.


The bill, which proposes to reserve 33% of all seats in the Lok Sabha and in the state legislative assemblies for women, was first introduced in 1996 by the HD Deve Gowda-led United Front Government. After getting lapsed and being reintroduced several times through successive governments, it was passed by the Rajya Sabha in 2010 during UPA-II, but could not be passed in the Lok Sabha.

Yechury in his speech said that Modi had promised the BJP would pass the bill as soon as it gained a majority in the Lok Sabha during the election campaign. The party has a majority now and it’s been three years. But, as Yechury pointed out, I&B (Information and Broadcasting) minister Venkaiah Naidu recently stated that the BJP would pass the bill when they would have majority in the Rajya Sabha.

“The Rajya Sabha is not an obstacle,” said Yechury. “The bill had earlier been passed by the Rajya Sabha, and even if it needs to be reintroduced due to technical reasons, it will pass again. Because the majority in the Rajya Sabha want reservation for women.”

He said the BJP had resorted to devious tactics to pass several bills as Money Bills, claiming that they involved monetary expenditure, as a ruse to bypass the Rajya Sabha. “Implementing women’s reservation would also involve expenditure. So why not pass it as well?”

“These are just excuses,” said Yechury, adding that neither the BJP nor the RSS wanted the bill to pass because of their ideology, which assigns women a secondary position, confined to the domestic role.

The CPI(M) leader talked about the results yielded so far from the 33% quota for women in the Panchayati Raj Institutions (PRIs) which was introduced in 1992.

He said the experience with PRIs proved that the argument of not finding enough capable women leaders was invalid. In fact, reports proved that there was less corruption in the Panchayats where the Pradhan was a woman.

He said the fight was not just about securing quota in legislative assemblies, but about actually implementing gender equality as guaranteed by the Constitution of India.

In fact, when it came to women’s representation in Parliament, India ranked 138 among 145 countries, said Yechury.

“We need to exert pressure for this bill to be passed, both inside and outside the Parliament. We need to keep up the momentum of public pressure”, he said, appealing to other parties help push the bill.

Speaking to Newsclick, CPI(M) central committee member PMS Grewal said, “Every time the issue is raised prior to elections, all parties pledge their support. But when it is introduced, they start talking about consensus, claiming they can’t do anything without gaining consensus.” He said it was because of our patriarchal, hypocritical society that the bill hadn’t been passed yet.

As for the demand raised earlier by some parties for having a quota for OBC women within the quota as a precondition for passing the bill, Grewal said the government would first need to pass a separate bill reserving seats for OBCs in Parliament, only then it could introduce OBC reservation in the Women’s Reservation Bill. “Let us first pass this bill, and then talk about the quota within quota later,” he said.

Similarly, when asked about the “quota within quota” strand of opposition to the bill, Maimoona Mollah, president of Janwadi Mahila Samiti, said those demands were merely delaying tactics.

“The bill is already pending for 21 years. Can we at least let the women come in, first? And then we can discuss how to provide further quotas. Making it an issue now will again delay the bill by another 10 years,” Mollah said.