old post
Towards an Understanding of the University
June 23, 2017 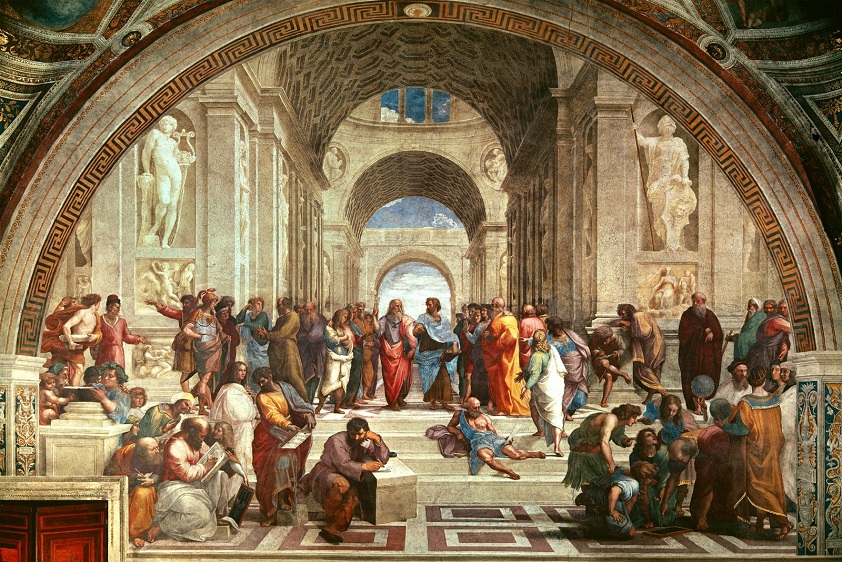 Raphael, "The School of Athens" / wikiart.org

Though at different historical periods dominant political hegemonies have sought to appropriate the University, recent years have witnessed this appropriation to an unsurpassed degree with a qualitatively greater intensity. It can only be compared to the ‘nationalisation’ of the University-structure during the Nazi regime and during the historical epoch of Stalin. Here is the logic of what the French philosopher Jacques Derrida calls “onto-theology of national humanism”: the false universal and universalisation of a specific, particular claim (the claim of a particular people – let’s say the Brahminical order of Hindu religion and culture to be the pan-Indian cultural phenomenon); the deification and mythologisation of a collective fusion (this is the meaning of fascism: the word “fasces” means collective fusion) on an aboriginal consciousness (for example: “the blood and soil” ideology of the national socialists), whether that fusion is thought in terms of a radical purity (Aryan identity) or of a mythic continuum (marked by a “tradition” that identically persists through every moment of historical transformation).

With the withering away of the “social welfare” model of the nation state in the wake of the extreme form of neo-liberal economic theology, the state is no longer an agent of social welfare but has become an industry among industries, or in fact, it has become the industry par excellence. In such a situation, when the Indian state has given up the “social welfare” model, and yet, on the other hand, has taken up the violent language of an extremely regressive and conservative form of nationalism, the University will be  allowed only one telos (the goal and the purpose): the University must assimilate itself into the overwhelming structure of neo-liberal economy whose false universalisation does not have to be opposed to the nationalism which is culturally based on the most obscure and the most primitive cultural con-fusion. The state can participate, as an industry or a corporate group, in the false universality of the new-liberal economic machine that is fuelled by extremely advanced technological and bureaucratic tools, and at the same time, at the social and cultural level, it can remain as primitive and regressive as in the fifth century BC! This is how the nation-state can claim to appropriate the University which, by definition, exceeds all the logic of territory: the University, by definition, has to be universal! It is the universal institution par excellence because it destitutes – and is this destitution par excellence – of all economic logic of national closures.

Now this paradox is totally hinged by the aforesaid onto-theology: the universality of the University, by its very axiomatic being, is irreducible to the onto-theology of any and all national humanism. The paradox is that the University, residing within the geographical territory of a nation and even with the economic support of the government, exceeds all possible national closures in all futures to come. This is the scandal which no nationalism can hope to bear: more extreme and brutal the form of nationalism becomes, more intolerable becomes the topos (site or place) of the University for the order of the state. Thus, either the University has to be annihilated directly, which is impractical, or the place of the University is to be transformed and converted into the very productive and fecund source where the onto-theology of national humanism grows like “mushroom after the rain” (Søren Kierkegaard).

Therefore, it is not surprising that in a premier University like the Jawaharlal Nehru University, the honourable Vice-Chancellor wants to reduce, in a typically technocratic-bureaucratic fashion, the whole University into a factory or industry. This is the typical gesture of an engineer, almost here in the social mode: a social engineering, if you like to say so. Behind this, and behind so many of his gestures, what is operating is the economic logic of technological rationality combined with the mystification of a primitive, mythic conservatism, the Brahminical order of engineering in the guise of an extreme, technologically sophisticated, economic and political domination.

It is not for nothing that Martin Heidegger could say that technology can’t think. The brutal assault on the Universities today has the purpose of creating a thoughtless order, the order that thoughtlessly – that is, without critiques, deconstructions, subversions etc. – accepts the political and economic domination of the neo-liberal Brahminism.

In Indian society, generally, we always have the weakness for engineering and the civil services. From very early on, we are ourselves engineered to be engineers and civil servants, and we think engineers and civil servants are the highest human beings ever. This is so much so that the dominant political parties, just before elections, suddenly build bridges and repair roads (in other words, do bit of engineering!), and the mass of people are overwhelmed by the illusion of the social progress that is made in two months’ time! And our Universities are now increasingly transformed into producers of engineers, just like IIT’s , while the University, which is by definition an incomparably higher educational institution, is precisely that place where closures of all onto-theological national humanisms are to be interrogated and questioned. This is the highest and greatest contribution that the University can make to the whole human race: that it must exceed, by its very axiomatic presence, all possible closures and hegemonic dominations. The University professor and the University student, by definition, occupy incomparably higher places among the human kind, in their very worldly destitution. In their very fragility, they bear a power that keeps the human race open to its radical and redemptive futurity.

Read Saitya Brata Das's incisive essay on being a Dalit here, and watch his interview with us after the stalling of his promotion by JNU VC here.