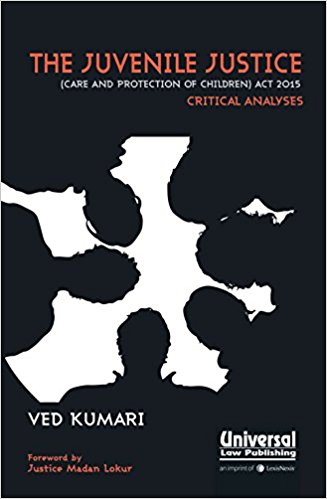 Dr Ved Kumari is the Dean of Faculty of Law, Delhi. She was also the Chairperson the Delhi Judicial Academy from 2009-2011. A former Fulbright and Commonwealth Fellow, Dr Ved is a leading authority on juvenile justice in India. Her extensive writing helped bring to public focus, the fallacies in the juvenile justice system and its implementation. She has written three books critiquing the legislation on juvenile justice with the latest one titled The Juvenile Justice (Care and Protection of Children) Act 2015, Critical Analyses, released in January, 2017. In this interview, She spoke to Lawyers Collective on why the Juvenile Justice (Care and Protection of Children) Act 2015 passed on 31st December 2015 was led by public opinion and sentiment based on social media fabrication of the juvenile as the “most brutal” in the barbaric Nirbhaya gang rape rather than reason.

Lawyers Collective (LC): Can you tell us a bit about how you were drawn to the area of Juvenile Justice law?

Ved Kumari (VK): It was one of the courses I opted during my LL.M. way back in 1978. My teacher was Professor Lotika Sarkar. There was no way that one would not get interested in a subject taught by her and Professor Upendra Baxi. He made us aware that one has to know the context of law to understand it. Therefore, I felt that I needed to look at the context of the juvenile justice law. For my dissertation, I took the combination of ideas from these two teachers to conduct my fieldwork study. My interactions with children who are subject of this law and hearing their stories helped me understand whether and how the law is being implemented. I think once you interact with a child, it’s very difficult not to think about them after your official dissertation is over.

The children on the street are just like children in our families. One gets concerned when you find such children in dirty clothes in the streets tugging at your sleeves, asking for money. When I went to speak to them, they told me that there were no public baths available for them. Even if there were, they didn’t have the money to buy soap or oil. Since they are living on the street, they do not have a place to store their belongings. So, even if they have spare pair of clothes, they will have to wear them all the time. During winters, if they needed a quilt, they would have to pay 9 rupees, and that’s the price back in 1970s. The same quilt would also be used as their mattress. They would have stories about how they have to deal with the police and the gundas in the area. After hearing such heart rendering stories one does not know what to do. For me it was a moral dilemma. My interactions with them contributed to my academia, but I asked myself, how can my work benefit them? I realised that I cannot go out there and deal with each of the crores of children on the streets but I can write and make their voices heard. And hence, I have been engaged in this field for about 39 years, since 1978.

When I was conducting research for my Ph.D., I realised that there was no book on this subject. Unless I understood the scope of a provision, how would I know the extent to which the Act was being implemented? The first book I wrote was released in 1993 by Indian Law Institute titled Treatise on the Juvenile Justice Act, 1986. That book gave the history and a section wise commentary setting the boundary of the law. Later in 2011 my doctoral work was published as Juvenile Justice System in India from Welfare to Rights. Recently the third book titled The Juvenile Justice (Care and Protection of Children) Act 2015, Critical Analyses was released which discusses the scope of the provisions of the latest Act.

LC: It is often said that juvenile justice is a very complex legislation perhaps because of difficulty in implementation. Do you think so?

VK: Complexity is different from implementation. I don’t think it is a complex law. However, the fashion in which the present law has been drafted has made it very complex. It is a law for the children and the predecessors of the existing legislation have been comparatively very simple. The earlier law was so simple that there were multiple gaps left leading to litigation. There were questions like whether the accused should be a child as on the date of offense, the date of arrest or date of trial? But the most difficult question has been how to determine the actual age. How do you prove your age if you do not have your birth certificate? Nine out of ten children in lowest economic strata are the ones who don’t have their birth certificate and they are the subject matter of this law. There is a huge battle that children face despite the claims that the juvenile justice law is friendly to them.

LC: Do you think that after the Nirbhaya case, the new legislation allowing children aged 16-18 to be tried as adults came as a reaction to what the democracy wanted?

VK: There is difference between democracy and “mobo-cracy”. This is what the mobocracy wanted. The legislation gave in to that mob-ocracy, not democracy. Where were the voices of these children in this whole conversation? The Ministry dealing with both child and woman was only thinking about woman, what about the child? There was a conflict of interest in that very situation. The Minister Maneka Gandhi while tabling the amendment had stated that that children’s safety would be ensured. More than one year later, there is not even one notification that has created a place of safety where the child can be reformed.  So it is completely hypocritical to say the amendments are made keeping in mind the benefit of the child. What is being done for the children? Nothing.

Easiest way is to include them into adult system and then forget about them. Even if the law has created a bad system, at least implement it properly. If you are required to create a place of safety for the child in conflict with law, is it sufficient to cordon off a special section in the special homes? The juvenile accused in the Nirbhaya case was kept isolated for one year. Even adults can’t keep them in isolation for more than 15 days without court’s permission.

Consider a sixteen-year-old child being kept in an isolated custody for a long time. Then if you send a radical element in his company, who is to be blamed if the child gets radicalised? Did the child ask for that company? Did the child create a situation so that he can meet that radical element? The system put the child in the radical’s company. Since you do not have a separate place of safety for the child, you will put him with terrorists, rapists, persons who have committed serious offences. Such a child will grow up with them for years. At the end of it, even if they are reformed, will the government give them jobs? In absence of any social interactions, who will be the immediate network of these (then) children? It will be the same radical elements they met during rehabilitation. So by taking this approach in the name if women’s safety, we are contradicting ourselves. Nobody is safe unless the law is implemented.

“..While restorative practice is being practiced in many countries even for serious offences resulting in decrease in repeat offences by them, the Indian parliament came under the political and emotional pressure created by one bad case of barbaric gang rape in which accused happened to be a child on the verge of attaining majority. .”

LC: During the discussion on introduction of new law on juvenile justice, what was media’s role in changing the narrative on how the child in conflict is viewed?

VK: If you do a google search, you’ll find that nowhere did the girl or her male friend (in the Nirbhaya case) single out the child accused as being most brutal. In fact, the JJB Magistrate also pointed it out. He was published and the media forgot him. Then there was so much negative campaign around this issue. The attempt was to create a psyche against children who commit such crimes.

LC: Now that the new Act has introduced the possibility of subjecting a child between 16-18 years to the adult judicial system, how do you see the situation changing in the future?

VK: I am hoping that some NGO, or a child in conflict with law will approach the Supreme Court or the High court challenging the constitutionality of the provision.

VK: Yes, in the progressive and forward-looking philosophy of juvenile justice, the new act has ignored the developments in disciplines like criminology, penology, victimology, neuroscience, restorative justice that has made progress in dealing with persons committing offences and victims of offences.

While restorative practice is being practiced in many countries even for serious offences resulting in decrease in repeat offences by them, the Indian parliament came under the political and emotional pressure created by one bad case of barbaric gang rape in which accused happened to be a child on the verge of attaining majority.

LC: Once the child returns from rehabilitation, he/she goes back into the same lifestyle, people and environment. Does the new legislation ensure that the child does not fall into the same loop committing crimes?

VK: Our system works in compartments. There is the Labour Ministry dealing with child labour, there is the Ministry of Women and Child Development taking care of welfare, then there the Ministry of Human Resource Development. There is segregation of work, and there is no coordinating body to follow up on welfare and education of the child once he/she is released from the juvenile justice system. The approach of taking care of them only so long as they are in children homes and rehabilitation centres is very narrow in itself. In fact, the initial intent of juvenile justice law was to cover crores of neglected children. However, now the whole focus of the legislation is a few thousand children committing offenses. Had the legislation addressed the issues of the neglected children, we wouldn’t have even these thousand children.

LC: Justice Vineet Sarin Committee brought to light the poor implementation by describing the state of affairs at Children Homes.  Why do you think the functioning of legislative and the executive is disconnected?

VK: We’ve always had that gap between theory and practice and it becomes a wider depending on who are the subjects of that law. If the subjects of the law are powerful people, it will get implemented. If the subjects or beneficiaries of that law are the ones who do not have a voice in the political system, they will get marginalized. Children also aren’t a part of the vote bank. So they do not have any kind of power – mental power, power from education, economic power or voting power.  So somebody else has to speak for them. Everybody is involved in protecting their own personal interest.

The Consumer Protection Act and the Juvenile Justice Act came into force around the same time. At that time, the consumer lobby was much stronger than the children lobby was. There was also a stark difference in the Court’s approach in the cases related to these legislations. One can compare the Sheela Barse case with the Common Cause case. Both the statutes- the Juvenile Justice Act, 1986 and the Consumer Protection Act, 1987 required adjudicatory bodies to be established.  In the Common Cause case, the Supreme Court ordered  the states to meet   their   statutory obligation of setting up adjudicatory bodies under the Consumer Protection Act within the prescribed time-frame. Whereas in case of the Sheela Barse, the Court stated that they “ hope and trust that special care will be taken to ensure compliance.”

The book is available on amazon.