After much wait, BJP has chosen Yogi Adityanath as the next Chief Minister of Uttar Pradesh. Adityanath, five times Minister of Parliament, has made many tyrannical speeches attacking the Muslim minority in the past. He runs the Hindu Yuva Vahini in Purvanchal, an outfit that has been often accused of instigating communal tension. As per his own affidavit at the time of contesting election, charges against him include attempt to murder, criminal intimidation, rioting, promoting enmity between different groups, defiling place of worship. 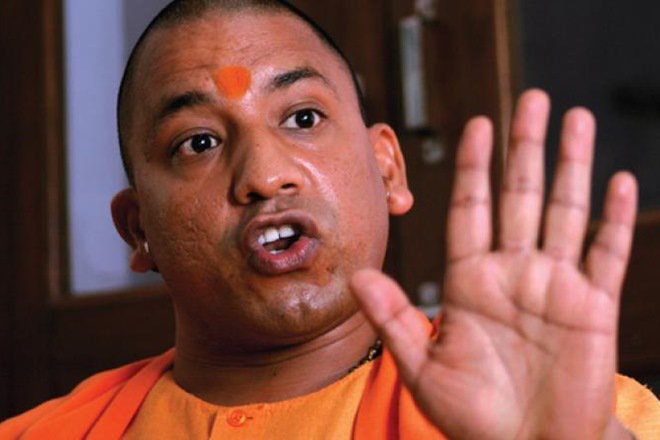 Following are some vicious statements made by Yogi Adityanath, now the new CM of Uttar Pradesh.

“If given a chance, we will install statues of Goddess Gauri, Ganesh and Nandi in every mosque.” said Yogi Adityanath at the Vishwa Hindu Parishad’s ‘Virat Hindu Sammelan’ organized as part of its golden jubilee year celebration in Varanasi on 10 February 2015.

“Lord Shankar was the biggest Yogi who started Yoga. Mahadev (another name of Lord Shankar) lives in every particle of this country. So, those who want to avoid Yoga and Lord Shankar can leave Hindustan.” Those opposing the surya namaskar sequence of yogic exercises should “drown themselves in the sea”. he said in June 2015 reacting to protests against Yoga Day (June 21) being made compulsory.

“Shah Rukh Khan should remember that if a huge mass in society would boycot his films, he will also have to wander on streets like a normal Muslim….I am saying these people are speaking in a terrorist’s language. I think there is no difference between the language of Shah Rukh Khan and Hafiz Saeed [Pakistani Terrorist]. We welcome that people go there [Pakistan], at least people who defame India will understand their own originality." was Yogi Adityanath's reaction after the actor added voice to the protest by the intelligentsia against the climate of intolerance in November 2015.

Yogi Adityanath was heard saying “If one Hindu is killed, we won’t go to the police, we’ll kill 10 Muslims.” in the documentary Saffron War – Radicalization of Hinduism.

In January 2017, he said about Akhlaq – who was lynched by a mob in Dadri in September 2015 – "All benefits given to Akhlaq's family should be withdrawn & they should be charged for keeping beef"

We should remember that Narendra Modi, Prime Minister of this country, has chosen nothing less than a hate monger for the post of Uttar Pradesh Chief Minister. "Sabka sath sabka vikas" is 100% bogus.