old post
Dear Journalists, Please be Objective; Acknowledge that the ABVP Was Violent at the 22 Feb Ramjas Protest
March 1, 2017

I stand before Ramjas College, Delhi University on 22nd February. There is heavy police deployment, and a number of people are standing on the footpath across the main gate. I speak to some of them; they are there to protest against the cancellation of a seminar "Cultures of Protest" scheduled on February 21 and 22. When the ABVP come out from the college, the police gets outnumbered. Violence breaks out.

I film the incidents of violence in front of the gate. I suddenly get attacked from behind. I fall; several blows follow. A policeman helps me up. My spectacles are broken; I am more concerned aboutdamage to the camera. My colleagues, a cameraperson and another reporter, comes to check on me. I return to the office distraught. What unnerves me the most is the way in which the incident is reported by the media at large. Almost all media houses misrepresents certain basic facts in the guise of "objective reporting" where "both sides" must be heard.

Here are some more instances where we sift fact from fiction.

Fiction: This was an Umar Khalid event.

The seminar "Cultures of Protest", organised by the Literary Society and the English Department of Ramjas College, included several speakers on several issues. Umar Khalid was one of the speakers. It is the Akhil Bhartiya Vidyarthi Parishad (ABVP) that can’t see beyond the name Umar Khalid. When the media calls it an “Umar Khalid event”, it unwittingly operates within the framework set by the ABVP. The issue is not Umar Khalid, or any other individual.The issue is freedom of speech and expression.

What could be an be an alternate headline? An example from The Wire:

And here are instances of biased titles:

Fact 2. The protest against the cancellation of the talk at Ramjas College was organised by a set of individuals who named the march “Save DU”. It was a joint, non-partisan march by students and teachers who wanted to march from Ramjas College to Maurice Nagar Police Station.

Fiction: The protest against the cancellation of the talk at Ramjas College was led by All India Students' Association (AISA).

The march was not called by the CPI (ML) affiliated students’ organisation All India Students’ Association (AISA). It is true that members from AISA were present, and medisa covergae can and must speculate on the role the group may play in the upcoming Delhi University Students' Union (DUSU) elections. But several protestors came from colleges which are not affiliates of DUSU. Besides, students and members of other political groups in the campus, such as Pinjra Tod, were present. In fact, ABVP beat up Prashant Mukherjee, the Delhi state President of the Students' Federation of India (SFI) so badly that he has fractured his right hand and broken a tooth. To make the protest an AISA versus ABVP one, delegitimises the central issue: the question of freedom of speech in a university campus. It is not that the speakers who were invited to the Ramjas seminar agree with each other. They were there to debate, discuss, disagree with their panelists, or with the audience. But this is how it was reported:

Fact 3. The Delhi police was biased in its approach. ABVP was violent.

Please, let us put a stop to this nonsense. Stones, bricks, glass bottles and eggs were thrown by the ABVP. The Delhi police did form a human barricade. But what happens to stone pelters in India? I am not suggesting that the Delhi police should have used pellet guns, but one set of people receive pellet injuries in one part of the country and another is let off. All stone pelters are equal but some stone pelters are more equal than others.

Fact 4. In a video, we (Indian Writers’ Forum) claimed that our reporter was beaten by the ABVP. Many asked us to prove that the attackers are from the ABVP. I provide three visual evidence.

A photograph in The Hindu shows me filming a scuffle: 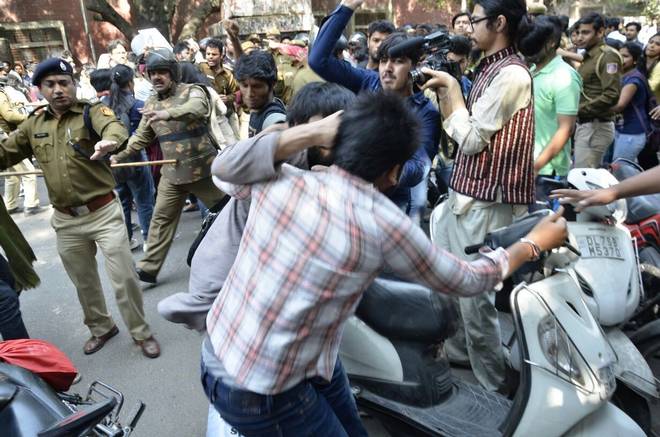 A news report from India Today where the same incident is filmed: Click here to watch.

Footage that has been recovered from our broken camera. Click here to watch.

The police formed a human barricade separating the two groups. I filmed the entire time from the side of the students and teachers. No one touched me. When I tried to go to the other side and film from the side where the ABVP was raising slogans, individual police officers requested me to stay put. It was likely I might get thrashed again.

As I had explained before, facts can be examined. And I lay bare the facts of the case. The following narrative emerges from these facts:

It is time to call a spade a spade. The ABVP side was violent. The protestors showed as much restraint as possible. Journalists, professors, students have been beaten up. We can all come to a consensus that this is not how a university functions.

But what do these headlines actually do? They move away from the main issue and recreate actual events through their publications. Let's analyse the following from The Quint.

The Quint sends its own reporters and photojournalists to the event. They get beaten by the ABVP and the Delhi police. The report too gets filed where the assault by ABVP is mentioned: "A reporter from The Quint was assaulted by ABVP. Two others were beaten up policemen".

But the team, then, recreates various versions of the same event by interviewing people from AISA and ABVP. Why can't The Quint trust its own journalists who are reporting from the site? Why can't they follow up more stories of journalists who face violence, or the freedom of the press at large?  Here, there is a clear shift: the editors of Quint, it seems, trust the AISA and ABVP more than their own reporters.

Where, then, can we find actual objective journalism? It can only be found from reporters who report from the actual site. Editors sitting in newsrooms can only rely on their reporters, on the eyes which witness the event.