On October 20, a demonstration was held at the Arts Faculty in of Delhi University (North Campus). Attended by more than a hundred students – predominantly women – from universities all across NCR, it was a protest against the members of the political outfit ABVP for their alleged harassment of the students during, and in the aftermath of, a night march through the North Campus and surrounding areas on September 23. A gang of ABVP men along with ex-DUSU president Satender Awana had misbehaved with students at the vigil in Vijay Nagar post the night march. A video of the night march and the altercation with ABVP was subsequently posted on social media by Pinjra Tod, and received over 34,000 views. This allegedly infuriated the ABVP, and according to members of Pinjra Tod, resulted in an escalation of the aggression faced by the movement and its activists on a daily basis. ABVP members are also reported to have threatened a student of the Faculty of Law and forced him to upload a video denigrating Pinjra Tod and its activists. In response to their intensified hooliganism and targeting, the Pinjra Tod collective organised a protest which called for a secure and democratic environment for students on university campuses. With the escalation of violence on campuses all across the country and particularly in Delhi, the attack on Prof. Ved Kumari, the dean of the Faculty of Law at DU, also known to be a strong feminist voice on campus, the assault on a woman student on DU’s South Campus, the assault and subsequent disappearance of a student in JNU, and the brandishing of guns by the current DUSU president Amit Tanwar in the Students’ Union office, among other, innumerable, every-day incidents – the campus no longer feels like a place that students, particularly women students can inhabit in a securely democractic manner. 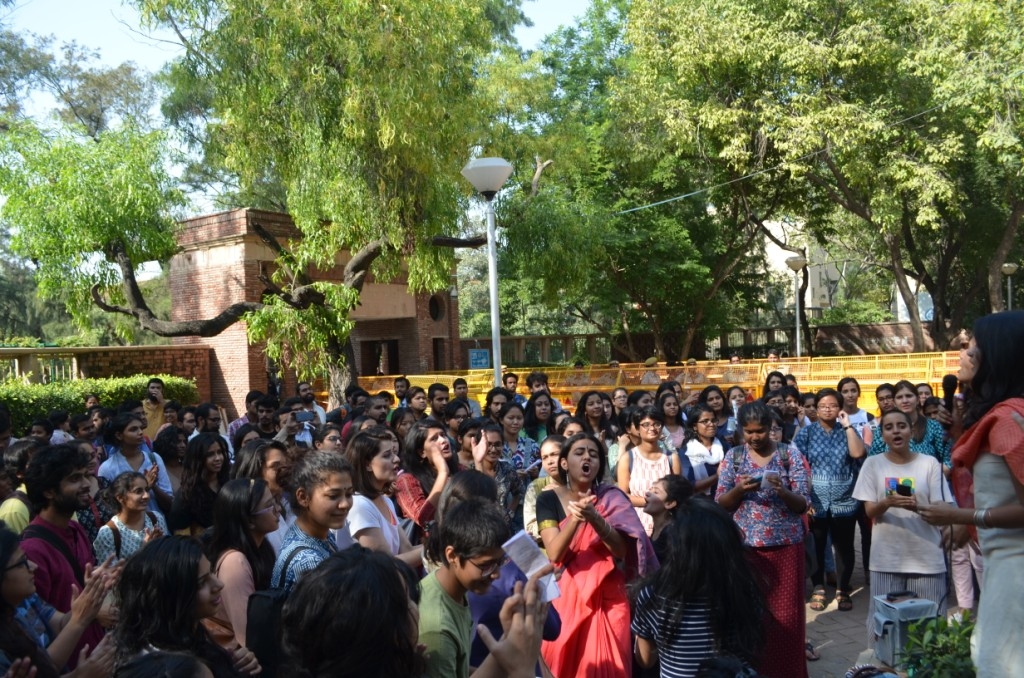 The demonstration saw members enthusiastically sloganeering and singing vibrant songs about breaking the chains of patriarchy. Women students spoke of freedom from the patriarchal norms and regulations at home as well as hostels and educational institutions. The slogans on the banners and placards reflected a sense of frustration from these long prevailing regressive and oppressive systems that have been at work on various levels in the lives of young women in the country. In midst of the event, after interacting with those who had gathered and responding to questions about the movement from a bystander, the attendees spontaneously agreed to take out a small march through the Faculty of Law, where students have, in the past, been subject to aggressions from ABVP members. This was initially resisted by the police personnel present in large numbers in the vicinity, but the students persisted, marching through the law faculty and concluding with energetic sloganeering at the arts faculty on campus. A sense of achievement was palpable among the gathered crowd, and the march ended with calls to continue the struggle against patriarchal oppression. Many female students present reported participating in such a protest for the first time, and their enthusiasm reflected the success of the event. 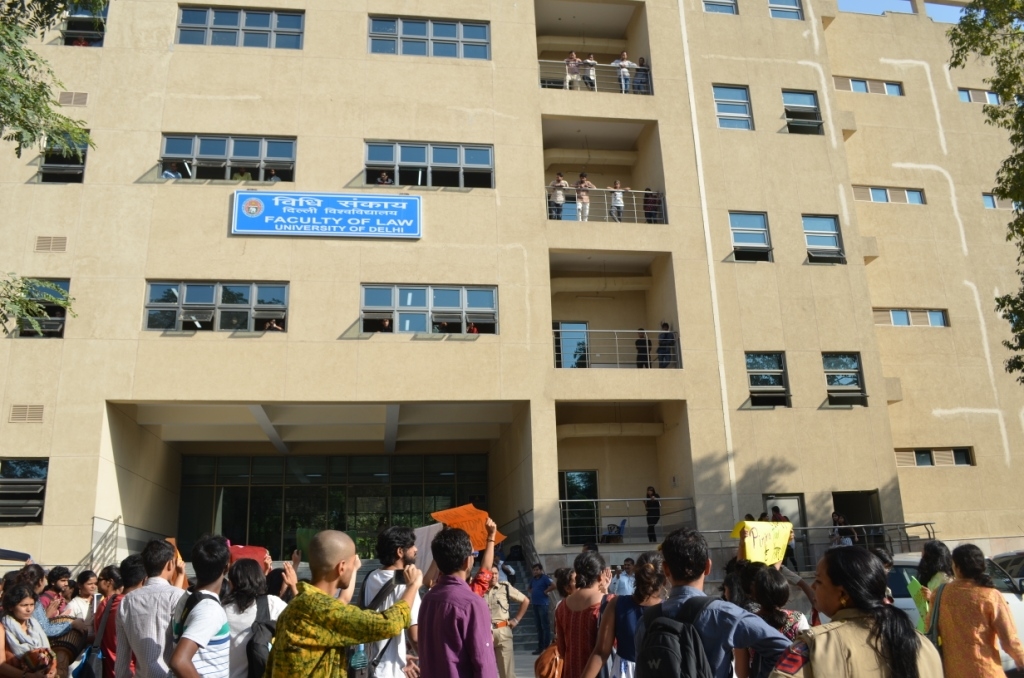 Since its inception in 2015, the Pinjra Tod movement has been raising issues which challenge the established societal norms and structures. Demands such as changing the restrictive and regressive hostel regulations, and curbing moral policing by hostel authorities, access to safe and affordable hostel accommodation, and pro-active functioning of Sexual Harassment Complaints Committee Cells, represent the aspirations of the newer generations of women students and question the functioning of the patriarchy. The political dispensations that thrive on pre-modern social structures and values are threatened by these aspirations. This women’s movement has been voicing opinions and protests on all forms of oppression in various social and political institutions. As a consequence therefore, the Sangh and its affiliate organisations are enraged and have gone to the extent of assaulting members of the movement. Since the nature of the ABVP is patriarchal, the structural shift that Pinjra Tod is attempting to bring challenges and makes them uncomfortable, which, in turn, results in the ABVP lashing out in such aggressive ways. The impact of Pinjra Tod and its public events and calls to action have been so evident from the start, that the ABVP had begun their retaliation early on in the journey of the movement, by tearing down posters and verbally abusing their activists. 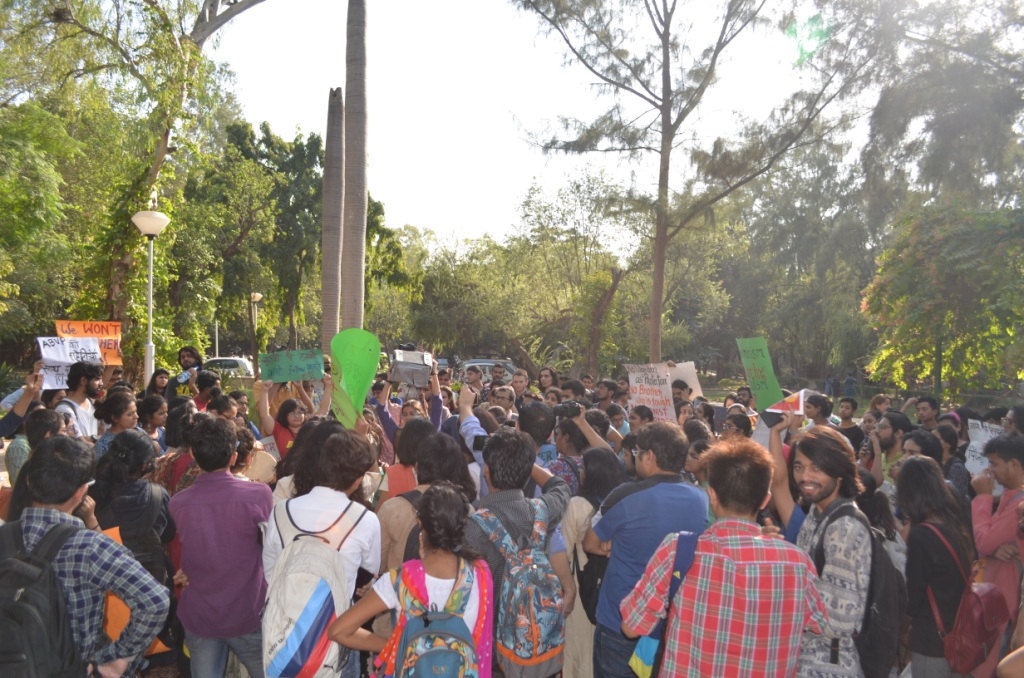