old post
The BJP’s Fascination with a Dalit Icon
October 18, 2016

The Bharatiya Janata Party has revamped its Uttar Pradesh headquarters into a neat corporate-style office. There is Wi-Fi, an all-new digital library with block-wise electoral data of the State, election war rooms, and strategy rooms. However, the most engaging bit is the decoration in the large hall on the ground floor where press conferences and meetings are held.

But there is one frame that would surely tickle the curiosity of any visitor. It’s the portrait of a warrior king in a combative pose on a horse. One could mistake it for the popular sketch of the 16th-century Rajput king, Maharana Pratap. But it isn’t him. It is Maharaja Suheldev, a little-known 11th-century Bhar-Pasi king. How did Suheldev find a place among the BJP’s icons? “His image will inspire dalit party workers who visit the office from various districts,” a BJP spokesperson explained to me. 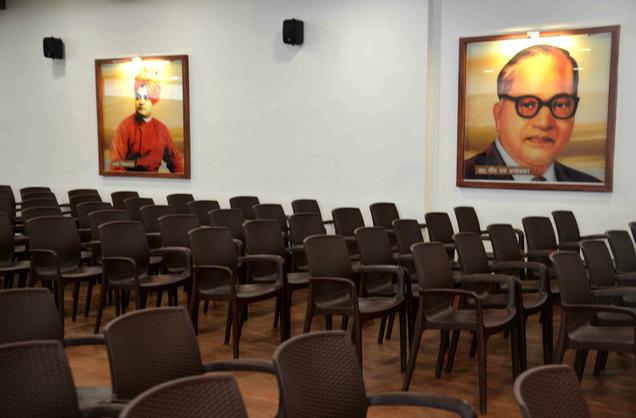 Portraits of Swami Vivekananda and Dr B. R. Ambedkar at the BJP's Uttar Pradesh headquarters in Lucknow

The picture is not a one-off affair. After it came to power in Delhi, and especially in recent months, the BJP has taken concerted steps to popularise Suheldev. In February, BJP chief Amit Shah unveiled a statue of Suheldev and launched a book about him, in Bahraich district near the Indo-Nepal border, where the medieval king enjoys legendary status. In his speech, which came at the time of the JNU controversy, Shah deftly merged Suheldev’s tale with the debate on what is anti-national. He urged the youth to take Suheldev, a “rashtriya nayak,” as an “inspiration” and his conquest as a “message” on how to fight for independence. “Brave King Suheldev is not forgotten by the people of this country even after 1,000 years. People who don’t remember their brave ancestors cannot make history. Only those who carry on with their fight can make history.”

A month later, the NDA government gifted Uttar Pradesh a new superfast train — the Suhaildev Express. The tri-weekly covers the breadth of India’s most populous State — from Ghazipur in Purvanchal to Anand Vihar in Delhi. But more importantly, the train ended a “tradition of naming trains without political considerations,” an English daily reported on April 30. "There were apprehensions as the proposal went against the traditional practice, but the minister [MoS Railways Manoj Sinha] insisted,” a senior official was quoted in the report. “When we objected, he got an endorsement from the Prime Minister's Office. After that we had no choice.” 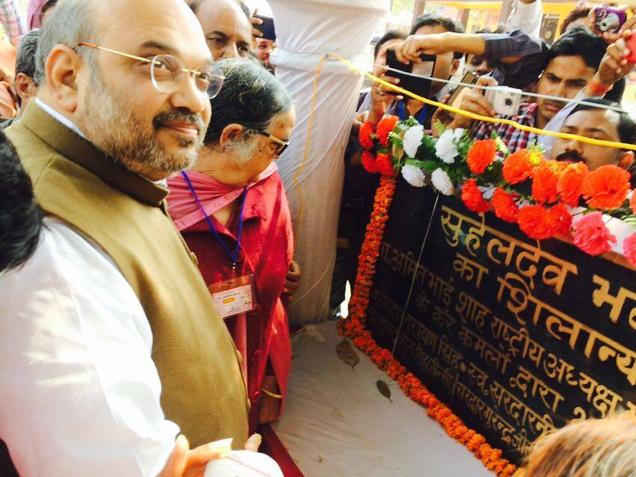 BJP president Amit Shah unveils a statue of Suheldev in Bahraich, on February 24, 2016 / via The Hindu

This was followed by the BJP tying up with the Suheldev Bharatiya Samaj Party, which commands support of the Rajbhar community in eastern UP. The party’s founder Om Prakash Rajbhar has often projected himself as a modern avatar of Suheldev, to the amusement of many.

Prime Minister Narendra Modi also made a veiled reference to Suheldev in his Independence Day speech, hailing the king who protected cows and also used them in warfare by placing them in front of his army. This came at a time when the assault on Dalits by gau rakshaks in Gujarat’s Una was a raging issue.

Someone not tuned into the micro aspects of identity, caste and communal politics in UP would most likely have never heard of Suheldev, let alone be able to decipher the BJP’s fixation with him 1,000 years after his probable existence. But dig deeper and you will see that it is not ordinary symbolism. It is a definitive strategy that includes not just electoral gains in the short term through caste appeasement, but also the insertion of shrewdly picked ‘Dalit heroes’ in the Hindutva pantheon, to the effect of nourishing dalit assertion and wielding its internal contradictions in order to bring it under the RSS’s cause of Hindutva nationalism.

Many non-BJP parties, especially the Samajwadi Party and Bahujan Samaj Party, have over the years tried to connect with Suheldev for electoral benefits. However, what distinguishes the BJP-RSS’s effort is the narrative that they seek to superimpose on the legend. The Sangh is known to pick characters, icons and folklores with a blurred past – leaving room for distortion and political appropriation.

Although there is no agreement among historians and scholars about the true caste origins of Suheldev, he is generally identified as belonging to the Bhar community, a backward caste. However, both the Rajbhar and the Pasi communities stake claim to his legacy. If the BJP was looking for a legendary icon from among the numerically stronger Pasis — who constitute 16 per cent of the dalit population in the State — there are more prominent ones than Suheldev. Maharaja Bijli Pasi, Satan Pasi and Lakhan Pasi have far greater legacies and stature.

The Rajbhars are among the 17 most backward castes in UP that have been fighting for Scheduled Caste status. Though estimated to be just about 2 percent of the population, they are concentrated in parts of eastern UP and can shift the electoral balance.

The Pasis are the second-largest Dalit caste in UP after the Jatavs. Numerically, the Pasis are more relevant — 16 percent of the Dalit voters, who are in sum 21 percent of the State’s total population — at 22 million. They are spread across Central and Northern UP, mostly found in Sitapur, Rae Bareli, Hardoi and Allahabad. Among the Dalit castes they have the lowest literacy — 49 per cent and, under the British rule, were notified as a criminal tribe. Connected with toddy tapping, Pasis are also known to rear pigs, a fact often exploited by divisive forces to pitch them against Muslims and even rationalise their historical caste subjugation and untouchability. One such story circulated by Hindutva forces is that Pasis took to rearing pigs and lived on the margins of villages so that they could defend the Hindu territory from the invading Muslims, who were repelled by the animal. (from Fascinating Hindutva: Saffron Politics and Dalit Mobilisation)

However, they were rejected because of their ‘secular’ stories, while Suheldev’s fable fits perfectly into the RSS-BJP narrative — he is the archetypal “Hindutva foot soldier”, one who stopped the march of Muslim invader Salar Ghazi Mian, a nephew of Mahmud Ghaznavi, in Bahraich, and, by halting the Islamisation of the region, safeguarded the Hindu dharma.

Myth and folklore shroud the incidents and causes behind Suheldev’s encounters with Salar Ghazi, facilitating the free flow of propaganda. According to the version propagated by the RSS, Suheldev slayed Salar Ghazi and later, himself died in battle while protecting the Hindu faith and temples. 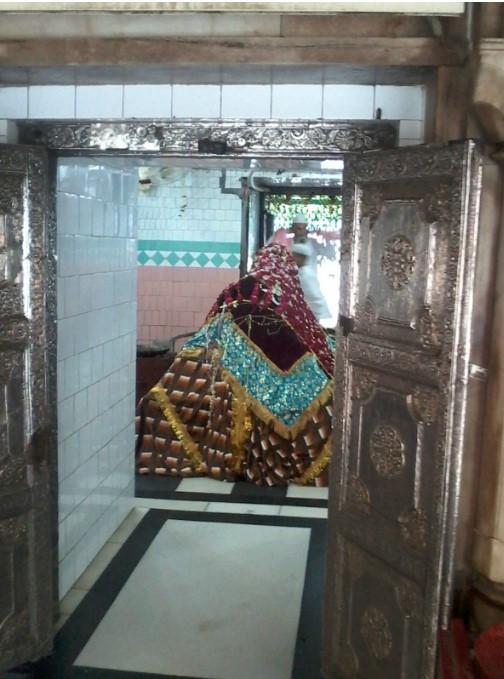 The RSS’ version, however, is contradicted by the popular culture in Bahraich, where hundreds of devotees – interestingly, mostly Hindus – come to worship at the dargah of Ghazi Mian during the annual fair in May. They believe praying at the shrine fulfils their wishes. Some communities also take out baraats (marriage processions) of Ghazi Mian as they believe he was slayed just before he could get married.

Ghazi Mian is “not perceived as an intruder but as a hunter who wanted to settle down here because of the beautiful environs,” writes scholar Badri Narayan in his well-researched book, Fascinating Hindutva: Saffron Politics and Dalit Mobilisation. Suheldev, on the other hand, is regarded as a “great tyrant and an oppressor of the Muslims and lower castes”. Salar Ghazi can be historically identified as the 'Badshah' mentioned by Prime Minister Narendra Modi in his 2016 Independence Day speech, who used cattle as proxy shields to defeat a 'Raja', believed to be Suheldev, in battle. “When Ghazi Mian arrived, all the people requested him to save them from the oppressions of Suhaldev [sic]. Very reluctantly he agreed, and a fierce battle ensued in which both Suhaldev and Ghazi Mian were killed. Thus Suhaldev is looked upon as a villain while Ghazi Mian is a hero,” Professor Narayan writes.

The larger strategy here is to project dalits as “the militia and saviours who made up the army of protectors of Hindu dharma,” writes Professor Narayan. “The Dalits and Backward Castes were said to be the communities that had contributed the most to keeping alive the cultural heritage of Hinduism in the long history of India [sic].” “Heroic tales” of Suheldev have been used as an instrument of communal polarisation, leading to tension and disturbance on various occasions in the past few years.

The appropriation of Suheldev has been on since the independence movement, but it really caught on after the BJP came to power at the State and Centre. In May 2004, a Maharaja Suheldev Sewa Samiti was formed in Bahraich and it organised a five-day celebration with Yogi Adityanath at its vanguard. The BJP also organises a festival in the region in May each year to commemorate Suheldev. A temple in his memory also came up in Jittora village. The centre-point of the myth, rituals and art was recast so that it supported the BJP’s version of the legend. “Many new rituals also have been adopted. Many fairs were held to celebrate Hindutva myths, [along with] the composition of musical folk theatres and the reinterpretation of existing ones on Hindutva lines,” says Professor Narayan.

Both Pasis and Rajbhars claim a glorious, and often, royal ancestry, but today they are backward in most socio-economic parameters. Charismatic leadership has also failed to develop in these castes, giving them little bargaining power in electoral politics. The Pasi voice has further shrunk with the Jatav dominance in the Bahujan Samaj party, which boasts the largest Dalit support. Mayawati is herself a Jatav.

Under these circumstances, it makes sense for other parties, especially the BJP, to target the Pasis and Rajbhars, who are yearning for political representation and do not have any ideological commitments or party loyalty. However, is the BJP’S mobilisation restricted to giving these castes a voice or political space? Clearly, no. It knows that identity politics in India eventually leads castes to the doorstep of Hindutva. By resurrecting Suheldev, it is trying to give it historical legitimacy. (ibid.)

History, given its vastness, is prone to interpretation, and distortion. And only experts can authenticate what truly transpired in the battle. But when has the Indian politician been shy of using myth, folklore, long-forgotten battles and ambiguous events to power his or her election campaign? Suheldev’s story suits the BJP’s agenda, as it provides them with a good blend of ‘a glorious past,’ ‘Muslim invasion,’ ambiguity and myth around dalits, Hindutva and nationalism. And the location, most importantly, is Uttar Pradesh, the laboratory of political experiments.