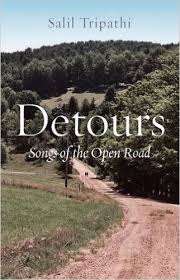 
Neha Kirpal writes on Salil Tripathi’s new book and speaks to the author.

“Not all heroes are perfect. When you stray too far from myths and histories, the questions that emerge are often uncomfortable. You have to tread carefully; there are landmines. And that’s why it is safer to follow the boy with the AK-47, instead of walking on the road not taken.”

This remarkable travel diary (Tranquebar, 2016) takes you on fascinating journeys, with insights into a place from the prisms of history, culture and literature. Each chapter of the book is a journey of vivid imagery of places, and full of its own little surprises. With evocative travelogues on Istanbul, Bogota, Jakarta, Berlin, Nigeria, Burma, and many more, the book is a treat for travellers young and old.

The book is divided into three main sections: "War & After", in which the author travels to places that have experienced wars or human rights violations; "Words & Images", which includes essays on places he has visited with references of writing or art inspired by their landscapes; and "Loss & Remembrance", which has memories of the author’s personal journeys with his late wife or the places he revisited with his sons after her death.

“Rushdie was right when he said that those who wished to destroy India would need to attack Bombay first, because Bombay represented what India could be, if the many narrower identities (which gave the country its richness) weren’t allowed to jostle with other identities in a race to dominate, but instead to intertwine and intermingle and get submerged in a bigger humanity, one as vast as the sea itself. Tourists travelled in its motor launches to the Elephanta caves, traders dealt in shares, tycoons set up businesses, shoeshine boys worked hard and dreamt of striking it rich, dabbawalas kept the city fed, performing their astonishing daily choreography, of taking hundreds of thousands of home-cooked lunches to the right office worker, making sure that the Jain trader won’t end up opening a box with tandoori chicken in it, and the meat-eating banker won’t find an onion-and-potato free Jain vegetable curry with dal fried in ghee but without using ginger in his box, and the Christian typist will get his Mangalore prawn curry; just as starry-eyed girls coming from the hinterland to make it in the Tinseltown would look at those large billboards and imagine their own faces smiling at the traffic below. The city’s absence of majority was demonstrated in its plurality—the Zoroastrian philanthropist, the Punjabi film producer, the Malayali clerk, the Konkani bookseller, the Jewish bookkeeper, the Anglo-Indian model, the Gujarati stockbroker, the Marwari wholesaler, the Marathi bureaucrat, the Tamil lecturer, the Bengal MBA, and the cab driver from Uttar Pradesh. The city belongs to nobody, and to everyone. Not interested in the past, Bombay was where, Rushdie would write, ‘All Indias met and merged…Bombay was central; all rivers flowed into its human sea. It was an ocean of stories; we were all its narrators, and everybody talked at once.’ ”

My favourite section is "Words & Images": In “Bambai Meri Jaan!”, the chapter on Mumbai, he quotes the writings of Salman Rushdie; in “Shimmering Canals, Shimmering Discontent”, the chapter on Amsterdam, he talks at length about Anne Frank; and in “Lighting Literary Lamps in the City of Lights” and “The Last Good Country”, he retraces Papa Hemingway’s footsteps through Paris and Madrid by visiting all the bars that the author frequented in these cities.

“The writers who had come to Paris in the 1920s had chosen self-imposed exile to understand themselves better. Men like Hemingway saw bullfights in Spain, they fished in Italy, climbed the Alps, and slowly got sucked into the vortex of European politics when the debates were about such fundamental questions like the rise of Nazism and Fascism which questioned humanity and our existence, and what we would do to influence the events and whether we were brave enough to do something to shape them.”

In Nairobi, the author visits the colonial house of Danish author Karen Blixen, whose memoir Out of Africa was made famous by the 1985 film. He describes it as “a haven of an island in the turbulent sea of humanity” that the Kenyan capital has become today. In Bangladesh, he visits the places where Rabindranath Tagore wrote his poetry and in Chile, he visits Pablo Neruda’s house.

“Neruda’s house is large, with quaint masks looking appropriately whimsical, and curvy glass bottles, appearing deliciously seductive. On the walls and ceilings of his bar he had scrawled the names of poets he would have liked to sit around him and share a drink: Guillaume Apollinaire, Nâzım Hikmet and Walt Whitman. It was as if they were his constant companions.”

The last chapter of the book – on California – is narrated in the form of a creative poem. “Chasing a Dream in a Park”, the chapter on New York — the author's favourite city — has some beautiful descriptions of Central Park, made most famous by Woody Allen, featuring in 14 of his films.

“That evening, we saw the carousel, with happy children sitting on those ponies, chasing some elusive dream, going round and round, cheerful and merry, along the brass ring. Everyone had a dream to chase in New York. I looked at the grownups, standing along the railing, some waving at their children, some taking photographs, a few on their cell phones, talking agitatedly, pacing away from the carousel and its music. The carousel is full of kitsch, but in the critical sense at the end of The Catcher in the Rye, Holden Caulfield discovers his own private pleasure, when he sees his sister, Phoebe happy. It reminds him of his own joyful times; he remembers his own dream, of being a catcher in the rye.”

In “Loss & Remembrance”, one often notices a hint of sadness in his prose as he revisits the places he had been to with his late wife.

“Not all experiences are happy, and nor are all lives. But experiences shape us. Like waves, experiences lash at us; like the cliff, we stand stubborn against the erosions, taking blows.”

Tripathi’s writing has won the Red Ink Award for Human Rights Journalism (2015), a Bastiat Award (2011), and a Citibank Award for Economic Journalism (1994). I posed to him the Proust questionnaire — a series of questions about one’s personality, devised by the French writer Marcel Proust. Here are some answers from the author:

1. Your favorite destination?
Home — in the end, we have to return, for only then is the journey finished.

2. Your most memorable travel experience?
The sharp eyes of a cat staring back from a Swiss home as I walked on a trail in the Swiss Alps, with Vivaldi's Four Seasons playing through my Walkman, the trees shading me, and the lake below.

4. Your favorite guide or book about travel?
Any novel about the place I'm visiting.

5. Your favorite magazine, past or present?
The New Yorker.

6. Your idea of happiness?
A glass of wine while watching the sunset with a close friend by my side.

7. Your most adventurous travel story?
What I write about in my book, about the Niger Delta. We were in a boat and it was raining hard. The boat's 'captain' spread a plastic sheet on us. The boat swayed and we held each others' hands tight. The boat then swerved to avoid oil smugglers. They would have killed us if they saw us.

8. Your favorite beach?
None. I don't like beaches. But I liked a long walk at Half Moon Bay in California with my friends when the sky turned pink.

10. Your favorite city?
If I have to choose, I will say New York, but Paris is a close second. If I spoke French, I would probably have reversed the order.

11. Your favorite museum?
MOMA in New York — and the Musee d'Orsay in Paris.

12. The restaurant you would travel farthest for?
A nice Udupi with steaming fresh idlis with sambar, without coriander.

14. Your favorite travel companions?
My sons.

16. Peace, culture, or adventure?
Culture. Peace can be boring, adventure takes too much effort.

17. An ideal trip would be?
One you could repeat and not get bored of; one where you'd make a friend for life.

18. Five things you will never forget:
My first visit to Shakespeare and Co. in Paris.
Looking down from Rohtang Pass — the first time I walked on snow.
Gulmohurs on Malabar Hill seen from Marine Drive.
The view of Cape Town from the top of the Table Mountain.
Kecek dance in front of the fire in Bali.

“I have been going to New York since 1983, and it remains my favourite city. There are two types of people in the world — those who like a real city and those who like a city that attempts to be one. I prefer Bombay over Delhi, Saigon over Hanoi, and Hong Kong over Singapore for that reason, and that’s why I pick New York over Washington.”

Neha Kirpal is the author of Wanderlust for the Soul. Her blog is nehakirpal.wordpress.com.