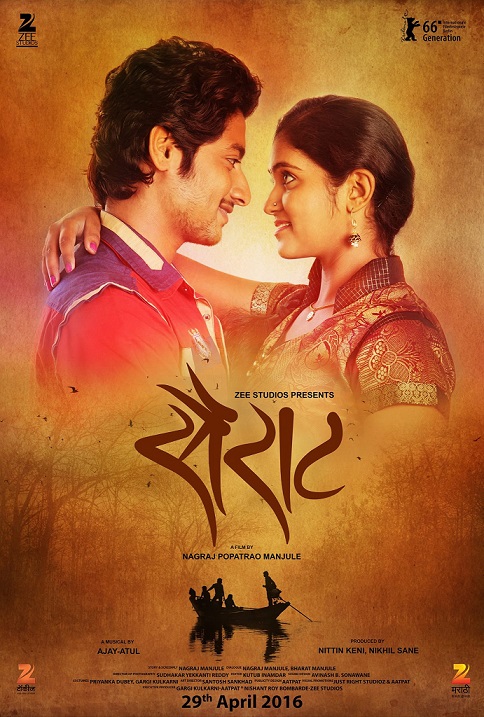 Yesterday I performed a social duty. I watched Nagraj Manjule’s Sairat [English: Wild]. Every once in a while, I miss an important film. No one quite holds you up to it. But since Sairat’s release, everybody around me has been asking, “Did you watch Sairat yet?” The tone implies that watching this film is a duty. I performed it yesterday.

I watched it at a suburban multiplex. The theatre was half-empty, and there wasn’t a crowd enjoying the tunes from the film’s hit soundtrack. So I could watch the film properly. There were a few non-Marathi speakers in the audience, and of course a lot of Marathi speakers. They were responding well, unwittingly commending the script with the right giggles at the right time, and snickering, smiles, and nudges. Some left the theatre with tears in their eyes. A lot has been written about this movie on the social media, particularly its ending, to the point that the shock element has been blunted. But as the end of the movie approached I felt like that man who sees his imminent end. In the film Madras Cafe, just before the blast, the bomb-clad terrorist is dressed up in her final attire. The director mutes all sound. On display is a cruel ceremony, a bride being dressed up to leave home forever. Sairat’s ending stirs up a similar emotion. I wasn’t taken aback by the ending, unlike the early watchers; but it did suffocate me.

With all its flaws and its merits, I liked the movie. The flaws exceeded the merits though. At first I was perplexed about why it would be the biggest ever blockbuster in the history of Marathi cinema. After all, an overstretched plot and a dispersed focus are major artistic impediments that ail this film. In this day and age of diminishing attention spans, a feature’s three-hour length should worry its makers. Yet the viewers watched it, enjoyed it and experienced it fully. This is nothing short of a miracle. But it cannot be dismissed as a mere marketing miracle. Nor can the brand value of a director drive such a feat. When a regional film breaks all collection records and grows across length and breadth, its popularity spreading wild, the reasons for its success and its implications become crucial. The implications of Sairat's success need a thorough examination, and from a variety of angles. The secret to Sairat’s success, I believe, lies not within the artefact, but without. I contend that we cannot find answers within the scope of the craft. In fact, what we will find through such a limited investigation would be deceptive. On the other hand, looking at what the success reveals, about the changing tastes and sensibilities of a huge section of society, is critical.

Of course Sairat has several noteworthy features. One of them is the absence of a contrived, scripted dialogue. It stands out as realistic and spontaneous. It is chitter-chatter, ambiguous and in its very nature, bahujan. Bahujan – that militant demonym coined by the visionary 19th-century social revolutionary Jotirao Phule to denote the vast majority of the Indian population that Manu’s caste order relegated as inferior to the "twice-born”. The language Sairat’s characters speak demolishes the grammar of the standardised dialect. Sentence structures militate against strict logic. Equally remarkable are its character sketches, particularly those of the male protagonist’s two friends — Pradeep a.k.a “Langdya” [Tanaji Galgunde] and Salim a.k.a. “Sallya” [Arbaz Shaikh]. The limping, bowlegged Pradeep is a superb character. Tanaji Galgunde, who plays Pradeep, is outstanding. In a number of scenes “Langdya” is conspicuously juxtaposed on the screen by various men with assorted physical deformities. The pervasiveness of such symbols of disabilities of ordinary, poor people and their helplessness is prominently on display. The movie also moves increasingly from fantasy to reality. But even the fairytale romance of its two lovers is in the firm grip of the reality of rural life. The nakedness of caste in rural life is not hidden. When the Patil’s brat slaps his dalit teacher in the classroom, his Maratha father’s reaction betrays a certain pride and admiration. Later in the film, this same teacher has the following advice for the male protagonist: “Didn’t you sleep with the Patil’s daughter? Well, now leave her. This is what they do anyway.”

Such clear, caste-ridden references are, perhaps, gratifying to the audience. The film thus strikes a closer resemblance to the romantic lives of young women and men who live in the shadows of deprivation. It caresses that sense of romanticism and heroism in their lives. To date, quite a few “hero-heroines” on screen have appealed to the youth. This is different. The Parshyas, the Archies, the Sallus, the Langdyas are present in the audience and they are seeing themselves on the screen. Their environment is just as violent, heartless, deprived. It is here, in this very environment, that they seek reassurance. Sairat provides it, by picturing both their fantasies and their reality. But it also unpacks a picture of the future. The everyday lives of young men and women are presented for us in the form of a three-hour capsule.

The film is laden with bahujan culture. It resonates with the majority which can hear itself in it. It has its own aesthetics. This might seem false, fabricated and flat to the elite, or to those trained in elite understanding of Art. This film also does not have a definitive or well-formed shape. It flows organically. But it does have its own pace and its own nature.

The bajuhan youth that comes to watch this film have entered every small and big cinema theatre across the state. They have danced to its musical numbers. We can now go to a fancy urban theatre and dance, standing on its seats. There are none of those high-born types there anymore. The crowd resembles us now. Never mind the flip-flops, we shall dance full-on. This is a unique confidence that this movie has conferred upon the young. This picture shows their face and speaks their tongue. This inadvertent realisation has driven them wild. It is factors like these that operate covertly behind the success of Sairat. Its success has less to do with its art per se, and more to do with the social-scientific factors within and without.

What Sairat’s massive achievements mean, though, is that henceforth the responsibilities of, and exceptions from bahujan art, have augmented. It is clear now that the neat compartmentalised plots of older films might have been convenient; but beyond sanitising reality, they achieved little. People will now expect frank and explicit depiction of caste realities. It is no longer just an artistic element; it will be a demand, a need. This reality, unfortunately, is very complex. Films can no longer resort to the lazy, hackneyed and over-simplified equation of caste reality with the “Villainy of the Patil”. Khwada and Sairat might have offended a small section of Marathas, but such caste pride will also be of little use. Just as criticism of Brahmins has to be borne and tolerated by a progressive and sensible section of Brahmins, the Marathas too shall have to deal with criticism. There is no alternative. They will have to engage with it, attenuate their snobbery, and reform themselves towards a common progressive future. At the same time, other castes cannot assume the status of the oppressed. There are oppressors in those castes too. There are oppressors in all castes. Each caste looks down on those below it in the hierarchy. Particularly when it comes to matrimonial alliances, caste-conscious human beings metamorphose into ravenous beasts. Honour killings happen within every caste and there are innumerable examples of these from Maharashtra. Patriarchy afflicts every caste – the most oppressed castes included.

The woman of the "lowest caste” is thus the most oppressed human being. Bahujan artists who aim to confront reality will have to bravely face the layered complexities of caste oppression. The members of any caste, high or low, motivated by pride and identity will not think twice before trying to gag the voice of a work ostensibly critical of them. But the bahujan artist will have to take on, and struggle against, this kind of censorship. Sairat has not taken on this challenge. But it has cleared the way for future projects of this type. It is easy to expose the other who oppresses you. It is far more difficult to show – or even watch – how you oppress your kind. But that is the key to invoke humanity.

Translated from Marathi by Siddharth Adelkar from a review first published in the Maharashtra Times.