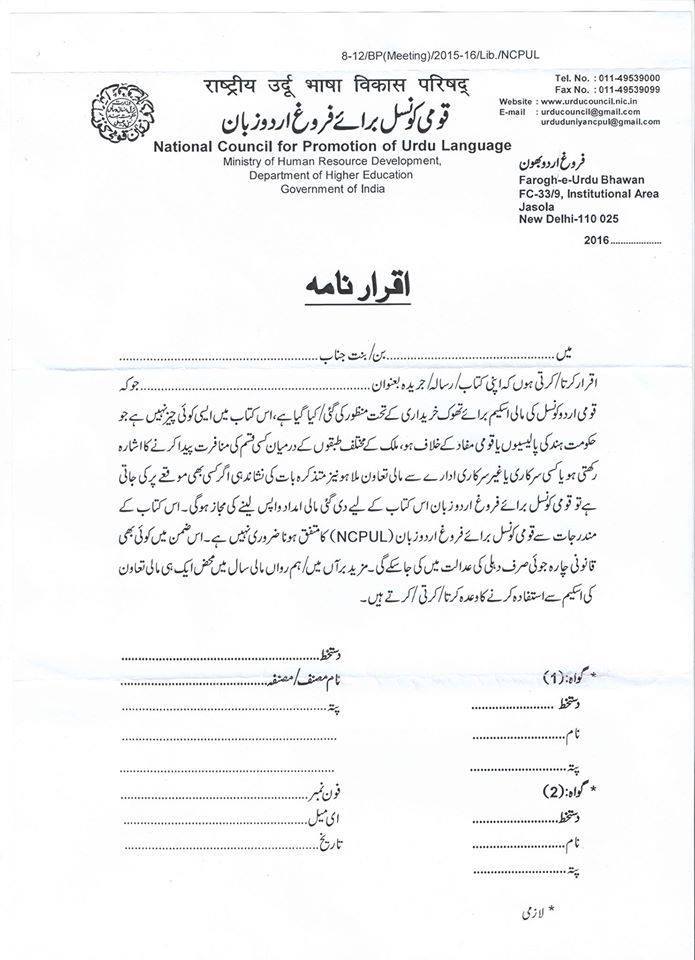 On March 17, 2016, Kolkata-based Urdu poet and writer Professor Shahnaz Nabi shared an alarming document with other Urdu language writers—a form she had received from the National Council for the Promotion of the Urdu Language (NCPUL), which operates under the Ministry of Human Resources Development. The form requires Urdu authors to declare in writing that the text of their literary or critical works isn’t against the policies of the Indian government or the country, and will not cause any sort of enmity between the different communities in India. It is a document directly in contradiction with the Constitution of India.

I shared this form on Facebook, asking if other writers had also received a similar document. On March 18, another Urdu fiction writer based in Jamshedpur, and Professor Yaqoob Yawar of the Benares Hindu University, both uploaded a similar form on their Facebook accounts, confirming that they had also received it, and that they had protested this new measure. The form states the following:

I son/daughter of__, confirm that my book/magazine titled____, which has been approved for bulk purchase via NCPUL’s monetary assistance scheme, does not contain anything against the policies of the Government of India or the interest of the nation; does not cause disharmony of any sort between different classes of the country, and is not monetarily supported by any government or non-government institution.

The form also warns the writers that, in case of a breach, the NCPUL can initiate legal action against the author and take back the monetary assistance offered to them. NCPUL director Irteza Karim defended the form while speaking with the media, claiming, “If a writer wants financial aid from the government, then of course the content cannot be against (the government). NCPUL is a government organization and we are government employees. We will naturally protect the interests of the government.” Karim continued: “The decision to add this declaration form was taken about a year ago at a meeting of the council members, which includes members of the HRD Ministry. The Home Ministry is also in the know of things.” Till March 20, this news was published in various Indian languages and on websites, and criticism of the NCPUL followed. On the other hand, in the papers sources would claim that the HRD ministry was constantly seeking clarifications from NCPUL office bearers over the controversy.

In the past ten days I’ve spoken repeatedly about this issue in the national media. This decision is undemocratic, and is an effort to turn writers into puppets of the ruling party. It is the duty of all writers to criticise the policies of the government and raise awareness about political and policy issues in the current scenario. Urdu writers along with regional and English language writers continue to protest, in their own ways, as I write this. Writers and journalists will and should continue to demand that the HRD ministry withdraw this dictum, which is anti-art, anti-literature, and anti everything creative; it is nothing but a sign of fascism.

Controlling the freedom to criticise the ruling party or government will destroy the fundamental ingredients of democracy, i.e. freedom of speech and the freedom to dissent. It could result in giving unquestionable powers to politicians. Today, the freedom of speech of Urdu writers is being attacked; tomorrow the same practice could, and indeed will be applied to writing in other Indian languages! It is the responsibility of writers working in different languages across the country to take a stand against this move.

Further, it would be wrong to think that criticising the policies of this government is equivalent to being ‘anti-national’. The freedom to discuss or criticise the ruling party is exactly what the opposition enjoys and uses in Parliament. It discusses policies formulated by the ruling party, and if needed, criticises it. Surely, our criticism or critique should be accorded some space, too. No democratic country can ask writers of any one language (read: the language, or languages, of a minority community) to stop criticising government policy. In fact, it is in the interest of the nation that writers, journalists and all concerned citizens have the freedom to discuss and criticise policies publicly. Moreover, freedom of speech is a fundamental human right guaranteed by our Constitution.  Whereas the form introduced by NCPUL goes against the core values that the Constitution of India espouses. It is equivalent to an insult to the creative fraternity of this country. It must be withdrawn immediately.

Rahman Abbas writes in Urdu and English. His first novel, Nakhalistan ki Talash (The Search for an Oasis), was released in 2004. It posed questions on the identity crisis faced by young Muslim men in the early '90s, and caused much upset in conservative Urdu literary circles. In 2011, Abbas was awarded the Maharashtra Sahitya Akademi award, which he returned in 2014 to protest ‘the growing intolerance of Hindu right-wing groups against minorities’. He lives in Bombay.