old post
JNU Student Testimonials: “I am proud that we can hold a discussion on Kashmir in JNU”
February 16, 2016

I must confess I hardly think what this regular JNU student feels, would reshape any of the all ready existing ideas that has erupted since Kanhaiya Kumar as been arrested. 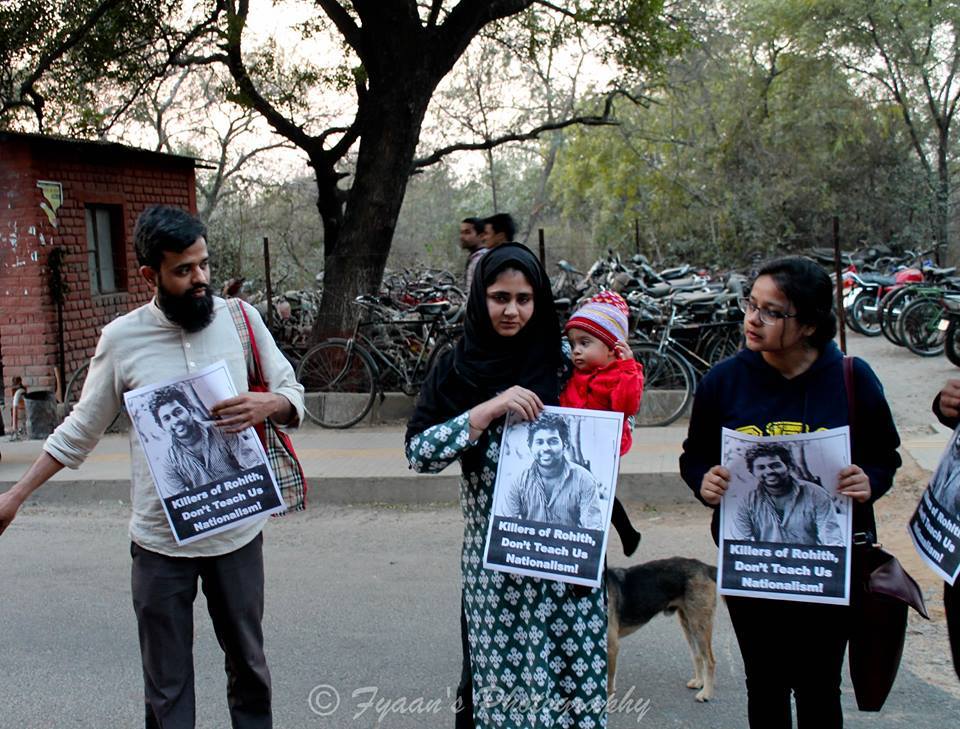 Human chain inside the campus on 14th February

A year back, a talk was held in our university to discuss the same issue which formed the ethos of the controversial 9th February cultural evening.  One of the accused in the 2001 Delhi Parliament attack case and former DU Professor S A R Geelani  — who was later acquitted by the court on the grounds of insufficient evidence — and others, came to speak about the importance of self-determination of Kashmir.  Needless to say, this might appear highly problematic to a considerable section of people whose blood boils every time they watch the videos of some people partaking in seemingly “anti-national” slogans. On that evening, I walked into the venue with very little knowledge of the Kashmiri situation and the socio-political nuances. The only simple wish in my mind was to listen to those very point of views which I would not possibly have another fair chance of being a firsthand witness to.  After battling my way towards the venue amidst the hustle of many protesters visibly offended by the heresy committed by the apparently ominous visit of Geelani,  and the other enthusiastic group who wanted this rather unconventional and extremely rare discussion to take place, I witnessed what some of the inhabitants of the valley (including Geelani) had to speak, how or what shaped their political position and what their appeal and needs currently comprises of. I would not get into a detailed reporting of what they said but I certainly did not find that anything they said could form an immediate security threat to the nation.  To the best of my knowledge, the talk comprised of students who agreed completely, vehemently disagreed, partially agreed, or was rather confused with what was being said before them. There were students who discussed newer solutions to the problem which suits their perspective. After struggling once again to pave my way back between the hustle between a group which are a potential threat to Geelani, and the other one being cautious of such potential, I naively remarked to my friend, “If I hadn’t witnessed this talk, I wouldn’t have known the enormous democracy this place allows. Had this place been part of even a slightly autocratic nation, this wouldn’t have been possible.” My growing love for the promise of a space for debate, critique and questioning of predetermined truths that was offered by my first classroom experience in this institution was titillated, and the closeted narcissistic pride of being a JNUite began. 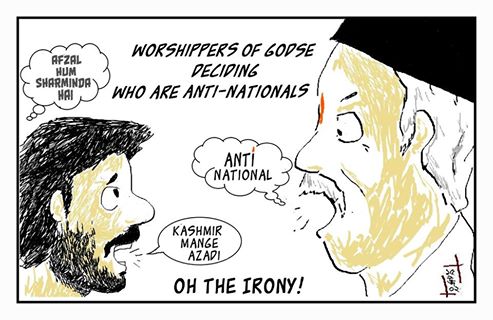 A year went by with the active participation of JNU students  in the movements like “Hokkolorob”; ‘Queering the Campus’; ‘Kiss of Love’; protests against the murder of Kalburgi; beef ban; Dadri lynching; #OccupyUGC ; “the institutional murder of Rohit Vemula”, and many many more.  I have encountered students in campus who had widely varying opinions in each of these issues, felt differently than one another, and so the participation in these events varied accordingly. The fact that these otherwise widely debated issues were discussed, spoken for and represented here, gave fodder to my growing fondness to the campus. Time and again this campus reminded me that the only thing one needs to be dismissive of is blind praise and blind reprehension.

No need to go about how befuddled I am when we are at a juncture when news channels across the country go about circling the faces of my university mates, marking them as threats to our country. Someone is creating possible lists the police might take a cue from in order to conduct arrests. The newly appointed Vice Chancellor is permitting the police to arrest the President of our union, conduct raids in the hostels. Mobs are coming in front of the gates to express their vendetta against the supposed threats to our country. We are battling the mindless logic of enthusiastic patriots on social media. Our parents call us time and again inquiring about our safety, requesting us constraint and restraint. Every day we negotiate with fluttering rumors of autocratic surveillance, censorship, narcotic raids, being questioned on the literature we own, our phones being tapped, and the outrageous possibility of being arrested, or being rusticated for being politically inclined in a certain direction. Our confusion turns into anger because we are suddenly thrown into a situation which defies the very mindset this university has shaped for so long. We made a mistake. We slowly got seeped into an environment where we partially forgot that such possibilities of excessive surveillance of thoughts and ideas exist. We forgot that there existed mechanisms of curbing one set of voices to promote the other existed.

So did our university. The atmosphere reeks of incongruity and unfamiliarity so much that, at times, it doesn’t know how to articulate its angst. And therefore it retaliates to enforce the balance it fears to have lost. When all academic and otherwise necessary activities remain suspended, it roars with unimaginable unity. It brings forward the rather unthinkable unity of professors, students, activists and workers to retaliate with the weapon of solidarity and getting our voices heard. I do not exactly know whether or not we are winning. Or what winning constitutes of. For what we know only, is to speak and let others speak. This, which constitutes our simple state of normalcy, might be blasphemy to others.  So when I see my professors and mates holding hands, getting beaten up, getting defamed and abused, our union president undergoing trials and awaiting justice in police custody, and all of us consistently encouraging each other with beautifully inspiring speeches how not to forget how we speak, the closeted narcissistic pride of being a JNUite kindles. Allow me JNU, to go against your own fundamental teaching for once and proclaim my blind faith in you.

Asmita Kundu is an M Phil research scholar at the Centre for English Studies in Jawaharlal Nehru University.