old post
Attack on JNUSU and the Left Built on Lies
February 13, 2016

In an unprecedented move, Kanhaiya Kumar, the President of the JNU Students' Union and an activist of AISF, was arrested by police in plain clothes yesterday, in the morning. He was charged with sedition and conspiracy, and sent to custody for three days. The case was filed over holding of an event against hanging of Parliament attack convict Afzal Guru. The move came as a shock for many as the JNU Students’ Union had come out with a statement criticising the slogans raised in the event. It had explicitly mentioned that their protest was against the cancelling of the event by administration under pressure from the ABVP. The arrest has drawn criticism from various progressive groups and individuals. Left organisations and parties have criticised the slogans raised by a group of student,s but have also condemned the arrest in strong words. They pointed out that the entire propaganda by the Right Wing is to malign the Left forces in the country, and is built on lies. As this report was being written, more than thousand students were marching inside JNU, seeking immediate release of the JNUSU President. A source in the administration says that the newly appointed VC, and the Registrar have given a written authorisation to the Delhi Police to enter today morning and take any kind of action they want. 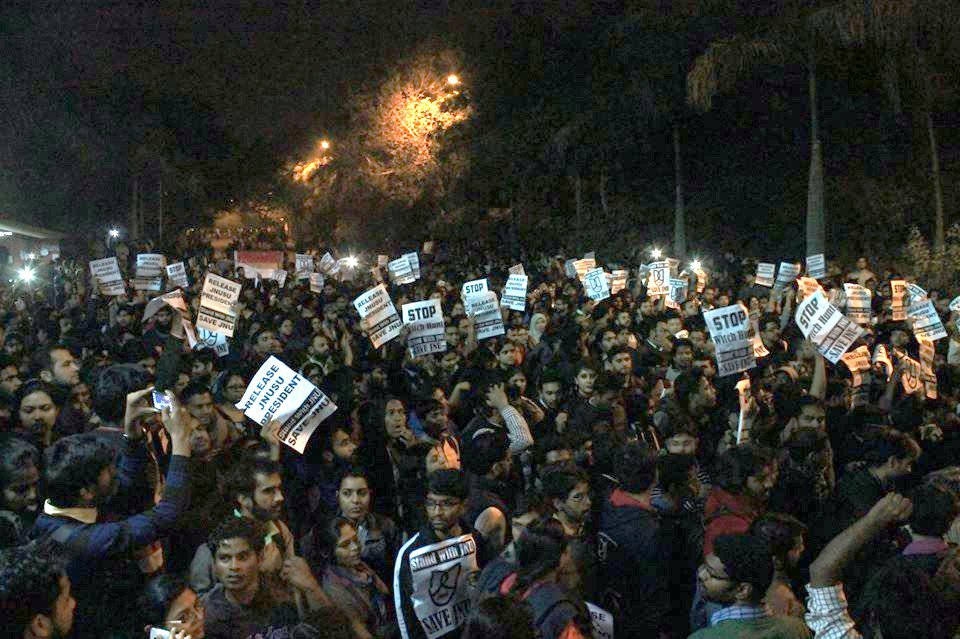 The CPI (M), in a statement issued on behalf of the Polit Bureau, condemned the arrest and demanded his immediate release. The statement said that, “An isolated incident, which does not reflect the opinion of the vast majority of the students, is now being blatantly used as an excuse to clamp down on the progressive and democratic student movement. This has been a long harboured design of the RSS and its camp followers.  This anti-democratic authoritarian attack on JNU campus, seen in the light of State sponsored efforts by the BJP central government to silence dissent in premier educational institutions, has serious implications.” The General Secretary of the CPI (M) Sitaram Yechury, also compared the times to that of the Emergency. He tweeted that, “Police on campus, arrests and picking up students from hostels. This had last happened during Emergency.” 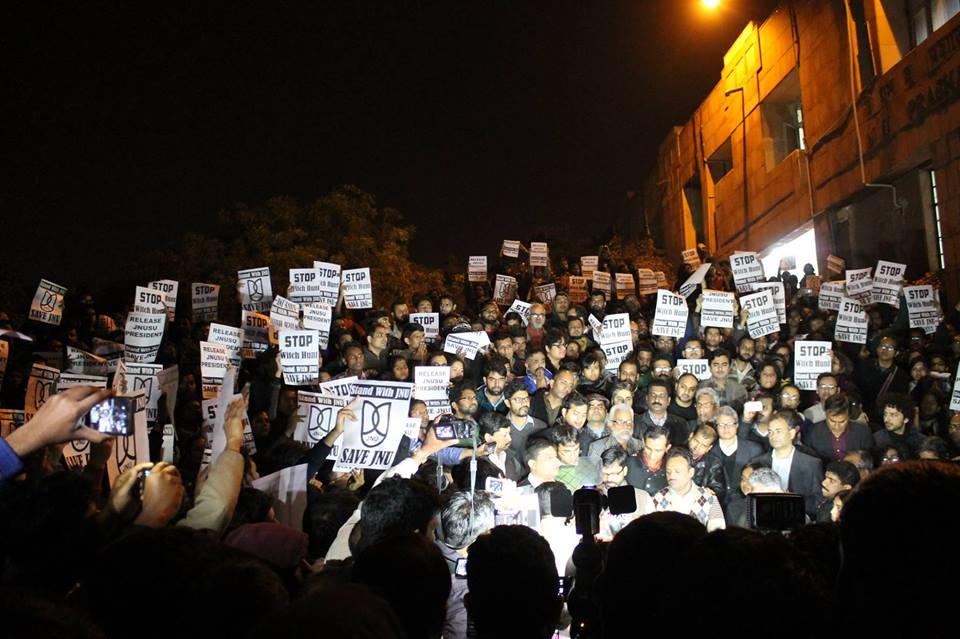 The former deans of various departments of the university and the JNU Teachers’ Associaton have also come out in defence of the student’s community. The deans in a statement issued have said that, “As he belongs to the All India Students’ Federation, his views and political associations are well-known, and to accuse him of sedition is beyond the bounds of credibility. The only previous occasion when the President of the JNUSU had been arrested was during the Emergency of 1975-77, and the present situation on the campus brings back memories of the Emergency days.” The JNUTA extended support to the JNUSU and said that, “ The teachers of JNU have always stood for upholding the Constitution of India and values enshrined therein and are opposed to any unconstitutional activity in the campus or outside. This very sentiment makes us express our strong opposition to attempts to use the law and the police to suppress democratic dissent and conduct a witch-hunt on our campus. The fact that the JNU Students Union (JNUSU) President is the first to be arrested establishes it. The JNUTA, following its Emergency Meeting, expresses its deep concern on the recent developments on our campus. The teachers of the University condemn the massive police presence and the attempt to escalate tensions.” 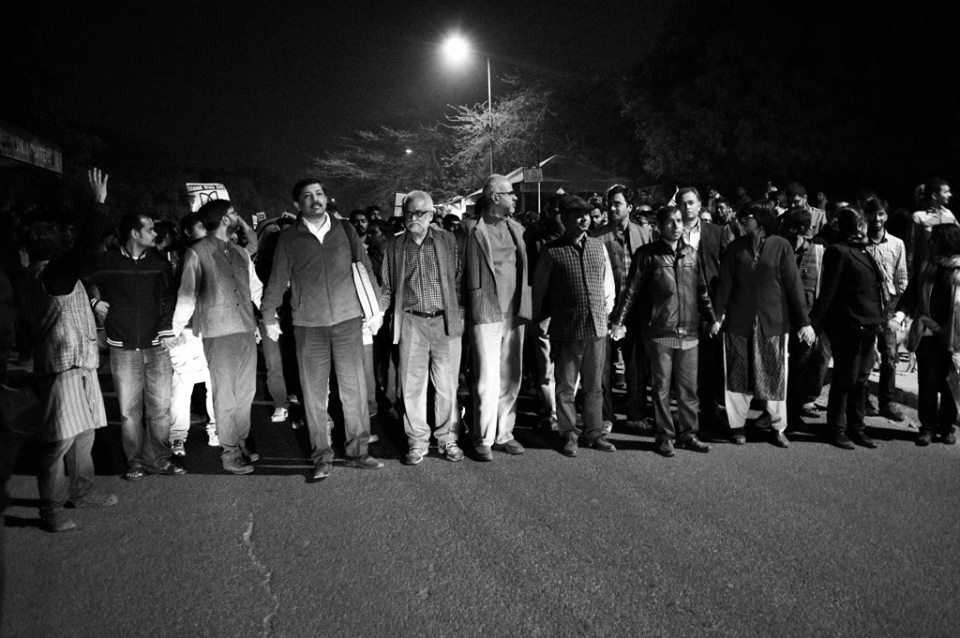 Former JNU students who had been arrested during Emergency issued a statement condemning the act of arrest.  The statement read, “Coming in the wake of the dastardly conspiracy of connivance and blatant discrimination that forced Rohit Vemula to take his own life, the storming of the hostels and the arrest of the president of JNUSU are signs of the imposition of an undeclared emergency that need to be opposed, confronted and defeated.”

The events preceding the arrest could be closely compared to that of Hyderabad Central University. After a complaint lodged by BJP law maker Mahesh Giri and ABVP, the case was registered yesterday under Section of 124 A (sedition) and 120B (criminal conspiracy) of IPC against unknown persons at Vasant Kunj (North) Police station.  Early morning the Home Minister took matters in his hand and said that, “If anyone raises anti-India slogans, tries to raise questions on country's unity and integrity, they will not be spared. Stringent action will be taken against them. “He was closely followed by MHRD minister Smriti Irani who is known for writing 5 letters to UoH asking them to take action against the dalit research scholar, Rohith Vemula. Such interventions by the ministers are politically motivated and are attack on the autonomy of the institutions.

Kumar, a third year student of PhD, had won elections after an electrifying speech by securing 1,029 votes. He is known for his oratory skills and staunch logical critique of the Right wing forces. In an event yesterday, he was vocal about the negligible involvement of the RSS in the freedom struggle. He pointed out that the JNU students community does not need the certificate of being nationalist by organisations like RSS and ABVP which have not participated in the freedom movement and do not believe in the constitution.