old post
In Defence of Our Present: On Giving Up the National Awards
December 11, 2015

Issued by Solidarity with FTII Students 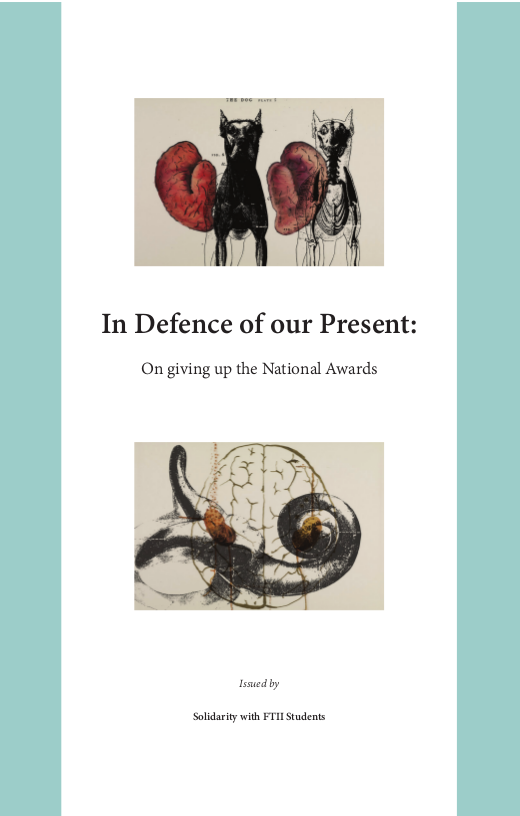 The publication of this volume marks an unusual moment in the cultural life of India’s present. It began quietly enough in early September 2015, as an act of protest by a handful of writers, who chose to return the awards that the State had honoured them with. They did this to pointedly register their outrage at the coldblooded killing of writer (and rationalist) M.M. Kalburgi, but they also connected it to the earlier murders of two well-known antisuperstition activists, Narendra Dabholkar and Govind Pansare.

This innocuous gesture of dissent seems to have touched an unanticipated chord, for the protest quickly snowballed, with dozens of writers – and eventually artists, performers, academics, and scientists – joining in to announce that they would also return their awards at the lack of an adequate response from the Government to these targeted hate killings The focus of protests soon widened to include the cold-blooded lynching of Mohammad Akhlaq, who was dragged out of his home in Dadri on the outskirts of Delhi, and beaten to death by a mob. Not because of his ideas, but because he was suspected to have stored beef in his refrigerator at home – apparently intolerable to the feelings of the Hindu majority village he lived in. The casual, even dismissive, pronouncements by important figures in the party in power, the BJP, was a brutal marker for the culture of extreme intolerance that was brazenly striding out to take its place in the sun in India.

A separate crisis had meanwhile been long brewing at the Pune based Film & Television Institute of India (FTII). Students at this important – if crisis ridden – institution had called a strike to protest the appointment of a new Chairman. The nominee, Gajendra Chauhan, was a political appointee with an embarrassing track record as an actor, and little else to show other than his unabashed proximity to the BJP. As the strike by the students of FTII entered a hundred days in the middle of September 2015, over a hundred filmmakers, all of them recipients of the National Award given in the President of India’s name, wrote to the President, and the Minister for Information & Broadcasting, asking them to urgently intervene in the matter. The appeal was met with silence. A month later a number of these filmmakers joined the writers in returning their awards.

Put together, the enormous range of opinion represented by this diverse group of protesting artists, and their quiet influence over public perception in a large part of India, touched a raw nerve in the Government. Ministers and politicians of the BJP were quick to discount the protests as misplaced, motivated, and eventually, even anti-National. But it was clear to anybody who cared that the symbolic gesture of returning State awards had communicated a deep disquiet that had been brewing in India since the ascension of the BJP to power.

This volume brings together the statements written by a number of those who chose to return their awards – writers, artists, performers, academics, scientists – in the hope that their considered reasons will offer all of us a collective understanding of a present that is almost upon us. And from that insight, hopefully, will stem a way out of the shadows.