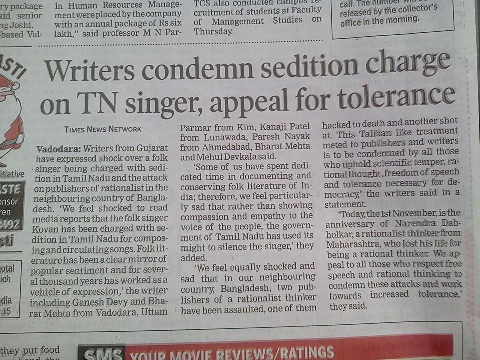 On the birthday of murdered rationalist Narendra Dabholkar, writers from Gujarat condemned the sedition charge against a folk singer from Tamil Nadu. The writers also condemned and the attack on publishers of rationalists in Bangladesh.

The full text of the statements can be read here:

We feel shocked to read media reports that the folk singer Kovan has been charged with sedition in Tamil Nadu for composing and circulating songs. Folk literature has been a clear mirror of popular sentiment and for several thousand years has worked as a vehicle of expression. Some of us have spent dedicated time in documenting and conserving folk literature of India; therefore, we feel particularly sad that rather than showing compassion and empathy to the voice of the people, the government of Tamil Nadu has used its might to silence the singer.

We feel equally shocked and sad that in our neighbouring country, Bangladesh, two publishers of a rationalist thinker have been assaulted, one of them hacked to death and another shot at. This Taliban like treatment meted to publishers and writers is to be condemned by all those who uphold scientific temper, rational thought, freedom of speech and tolerance necessary for democracy.

Today, the 1st November, is the anniversary of Narendra Dabholkar, a rationalist thinker from Maharashtra, who lost his life for being a rational thinker. We appeal to all those who respect free speech and rational thinking to condemn these attacks and work towards increased tolerance.